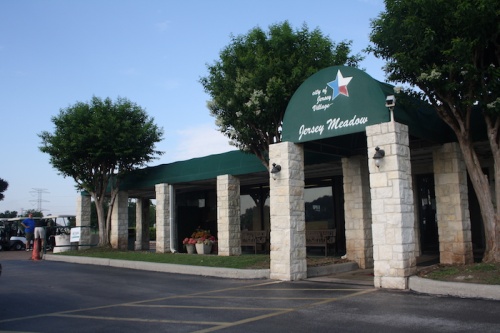 Jersey Village City Council is considering rebuilding the clubhouse at Jersey Meadow Golf Course—originally built in the 1960s—into a multi-purpose facility. Although the building would continue to serve its main purpose as a clubhouse, council members said it could also have broader appeal to both residents and outsiders.

In an assessment report from Ray+Hollington Architects that council received at its Feb. 19 regular session, the cost of renovating the clubhouse was estimated at $682,500.

Because the original construction was not high quality, the report said, leaks and water infiltration have caused damage over time. The recommended renovations included replacing the roof and northern wall panels, installing a vapor barrier and thermal insulation on the building's exterior and replacing the existing storefront glazing with improved framing and glass.

Jason Alfaro, the city's director of parks and recreation, said city staff felt the estimated cost for renovations was high. The city included $350,000 for golf course clubhouse renovations in its 2017-18 budget.

Based on estimations from several area architects, Alfaro said the cost of constructing a new building—one similar in size and nature to the existing building—would be around $1.1 million.

Each of the four council members present—Councilwoman Sheri Sheppard was absent—expressed interest in exploring a complete tear-down of the existing building and rebuilding a new one in its place. Councilman Greg Holden said he thought the city could rebuild the facility for less than the $1.1 million estimation.

"I think when you read the report, there are very few redeeming qualities," Holden said of the existing clubhouse. "In my opinion, it would be a waste of money to do a renovation project. I think if we made a concerted effort, we can do [the rebuild] much more economically than the numbers I’m seeing."

Council members Andrew Mitcham and Bobby Warren both commented on the need for a multi-purpose facility in the community that can also appeal to people who do not play golf.

"I think we’ve seen a real resurgence in the use of the golf course clubhouse, particularly in the last year or so, for many things other than golf," Warren said. "I think a rebuild gives us a lot more flexibility. We’re not stuck with one particular concept. The more use we can get out of it for many different things, I think that would really provide good value for the investment we’re making."

Alfaro said the goal for city staff is getting as much use out of the clubhouse as possible. He said possible uses could include weddings, banquets and meeting space.

The facility would still serve its main purpose as a clubhouse for the golf course. Warren noted that rebuilding the clubhouse could help the city attract more tournaments.

"We’re talking about a facility that has challenges and has been, at least in the last couple of years, subsidized by taxpayer dollars," he said. "If we do this right, [we can] have it as a part of this facility that will generate much greater revenue and enable it to be self-sufficient."

Council did not take any action on plans for the golf course, but directed the city secretary to examine dates for a potential workshop within the next few weeks. The workshop would include members of council and staff and would also be open to the public. The goals would include soliciting public feedback, determining the design criteria of the new building and getting enough direction for staff to seek bids from design professionals.

The bulk of the rebuild would be covered by hotel occupancy tax funds—a separate fund from the city's general fund that can only be used on projects designed to attract people to Jersey Village from outside of the city. The city is projected to have about $780,000 in HOT funds by the end of the fiscal year.

Whether the city decides to renovate or rebuild, the cost of the project will not be known until staff puts it out for construction bids. Costs that are not covered by the city's HOT funds would be covered by general funds. Councilman Gary Wubbenhorst said he thinks the city should try to limit the use of general funds as much as possible, and to only use $100,000 from that fund at most.