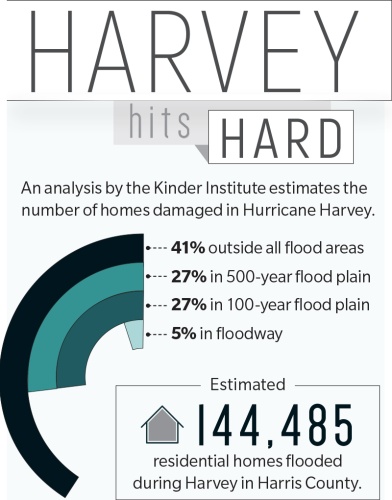 As officials embark on the annual process of assigning new property values for the more than 1.7 million parcels located in Harris County, the damage caused by Hurricane Harvey in August looms large.

It has been estimated by the Federal Emergency Management Agency that as many as 144,000 homes could have flooded in Harris County as a result of Harvey, which will result in lower values assigned to many of those properties when they are reappraised Jan. 1.

How that damage affects property values countywide remains to be seen, said Jack Barnett, spokesperson for the Harris County Appraisal District, the entity that conducts the reappraisal process each year.

“We still have people in the field collecting information,” he said. “The state has set Jan. 1 as the date that property is to be appraised, so we’ll be looking at the condition of the property at that time.”

A drop in appraised value could lead to a drop in property tax revenue for the various taxing entities in Harris County, including Cy-Fair ISD and the county itself. While Harris County is preparing for the possibility that budgets will have to be cut for certain departments, officials with CFISD said they do not anticipate cuts will be necessary.

“At this time, we do not anticipate that the loss of district property values and the resulting loss of tax revenue will have a significant impact on the 2018-19 operating budget,” CFISD Chief Financial Officer Stuart Snow said.

Properties in counties across Texas are typically reappraised each year beginning Jan. 1 by appraisal districts that operate within each county. In larger counties—like Harris County—appraisers are unable to appraise each individual property and instead use a formula that takes several factors into account, including home sale prices and sales volume.

The damage caused by Harvey is expected to make an already complex process even more challenging, said Debbie Cartwright, an attorney who heads the property tax initiative with the Austin-based Texas Taxpayers and Research Association.

Cartwright said Harvey makes it even more important for homeowners to play an active role in the reappraisal process this year.

“Property owners who have experienced disaster or damage to their homes should take photos, get damage estimates from experts and should provide that information to the appraisal district as soon as possible so the district can use it to fill their models and properly appraise that property,” she said.

Barnett also emphasized the importance of homeowners reporting damage, noting they have several methods of doing so. Residents can email information to [email protected], call a special hotline at
713-812-5805, report damage on the HCAD cell phone app or visit an office in person, he said.

HCAD has taken on additional efforts of its own to make sure homes are being appraised accurately in light of Harvey, Barnett said.

“We have used information from various sources—news reports, 911 and 311 calls, information from city and county flood control [districts]—really anything that we could use to identify, first, areas that had been flooded, then neighborhoods and then individual properties,” he said.

HCAD appraisers were sent out in the community after Harvey as soon as it was safe and will continue to work around the county throughout the reappraisal process, Barnett said. Although appraisers cannot enter houses, they have made damage assessments based on other factors, he said, including water lines on the house, furniture on the curb and blue tarps that indicate a roof has sustained wind damage.

“I think the main things [homeowners] should know is, once they have reported any damage to us, they basically don’t have to do anything,” Barnett said.

Property value notices are sent out to homeowners around the end of March and beginning of April, Barnett said. Property owners who feel they have received an inaccurate assessment have the opportunity to file a protest by May 15, he said.

The deadline to protest was changed from May 31 to May 15 in legislation passed during the 2017 legislative session. The protest could result in homeowners receiving a new value if an appraisal review board determines their complaints to be valid.

The Harris County budget department is bracing for a decrease in overall property tax revenue that could come if appraised values take a hit.

Property values—along with the property tax rate and tax exemptions—are one of the main pieces of the equation that determines how much revenue Harris County brings in each year. About 80 percent of revenue in Harris County’s fiscal year 2016-17 budget came from property taxes, county officials said.

“Harvey will deal a financial punch to us extremely hard next year because we primarily receive our operating budgets and funds from property taxes,” Harris County Budget Chief Bill Jackson said at a Harris County midyear budget review in September. “Many of these homes will not be restored to their original values for a long time, especially not by Jan. 1.”

Jackson said it is not yet known what the full effect of the drop in appraised value will be. He said some county departments will likely have to pass flat budgets, and some could see their budgets cut by as much as 5 percent.

“Even if we keep [budgets] flat, a lot of these departments have building costs that go up every year, so elected officials and department heads are going to have to work on managing that,” Jackson said.

Although officials with CFISD do not anticipate any significant revenue losses, Snow said the budget team will be closely watching property value projections leading up to when the district adopts its fiscal year 2018-19 budget in June. Local revenue—which is largely made up of property tax revenue—made up about 57 percent of the district’s general fund revenue in the 2016-17 fiscal year budget.

Snow said in his 10 years with CFISD and 18 years before that with Spring ISD, Harvey has caused more damage than any other storm. Even still, he said it is rare for a district to have to make budget cuts in that situation.

“Prior to the hurricane, we were projecting about a 4 percent increase in our values districtwide,” Snow said. “Even if those values drop to a 3.5 percent increase—which equates to about $250 million in value—the tax revenue loss related to that would be about $2.5 million. In a $1 billion budget, that’s really not significant.”

How much property values could drop as a result of Harvey is largely unknown, Cartwright said. However, trends in the real estate market can sometimes influence how values change in a community.

“It’s important to remember the appraisal district bases its values on sales information,” she said. “A lot of it has to do with the market.”

In the Cy-Fair area, home sale prices have remained stable in the aftermath of Harvey, according to data from the Houston Association of Realtors. Texas law requires a seller to indicate whether a home has ever flooded. However, local Realtor Amy Lippincott said several of her clients were able to move forward selling homes that have flooded twice with no price reduction.

As far as homeowners who did not receive damage during Harvey, Cartwright said their values will not necessarily increase.

“It’s not going to be automatic that values will increase on property that was not damaged,” she said. “We don’t have any data at this point that shows that is happening. The market will be soft until everyone gets over the notion that it might flood again.”

Correction: An earlier version of this story incorrectly defined the period during which property owners can protest their appraisals. The story has been corrected to clarify that the deadline to protest is May 15.
SHARE THIS STORY