Travis Tooke has been training in martial arts since his teenage years. After studying mixed martial arts, he knew he wanted to compete and share his passion with his community.

After reaching a brown belt, Tooke had the opportunity to train in Brazil for his black belt in jiujitsu.

Upon his return, he started training those interested in MMA out of his father’s garage in 2005, eventually moving to a rented space in the Bammel area. His move to this location was aided by his former instructor who operated the space adjacent to Tooke’s, eventually allowing Tooke to take over his space as well.

After this expansion, Tooke was able to grow the operation, learning the ins and outs of business.

“I think it was a lot of trial and error business wise and a lot of doing things incorrectly,” Tooke said. “If you want to get good at martial arts and jiujitsu, you need a coach. You’re not going to just do it by yourself and watch things on YouTube. You need someone to really guide you hands on, so getting a mentor in the business world was a huge jump.”

Through it all, Tooke said he has focused on the importance of maintaining a welcoming environment while operating his martial arts facility.

While not many pursue competition while training at Team Tooke, others have competed at the highest level in the Ultimate Fighting Championship. Tooke also created a system that allows families to train together and provide children with character development.

“I think what really sets us apart is especially in our kids program; we have a very established character enrichment program,” he said.

Character building continues into the adult classes, he said, providing a sense of camaraderie and a welcoming environment to those trying martial arts for the first time as well as veterans of the discipline. As the group learns together, Tooke said instructors witness people growing over time.

“It happens in little moments over the course of years of training: People will be completely different in their confidence and in their belief in themselves, but you see it as these little lightbulb moments,” Tooke said. “If somebody pays attention to body language and you see their eyes open up when they execute a technique correctly or they have a winning moment or even just a complimentary word from a coach, sometimes that goes a long way.” 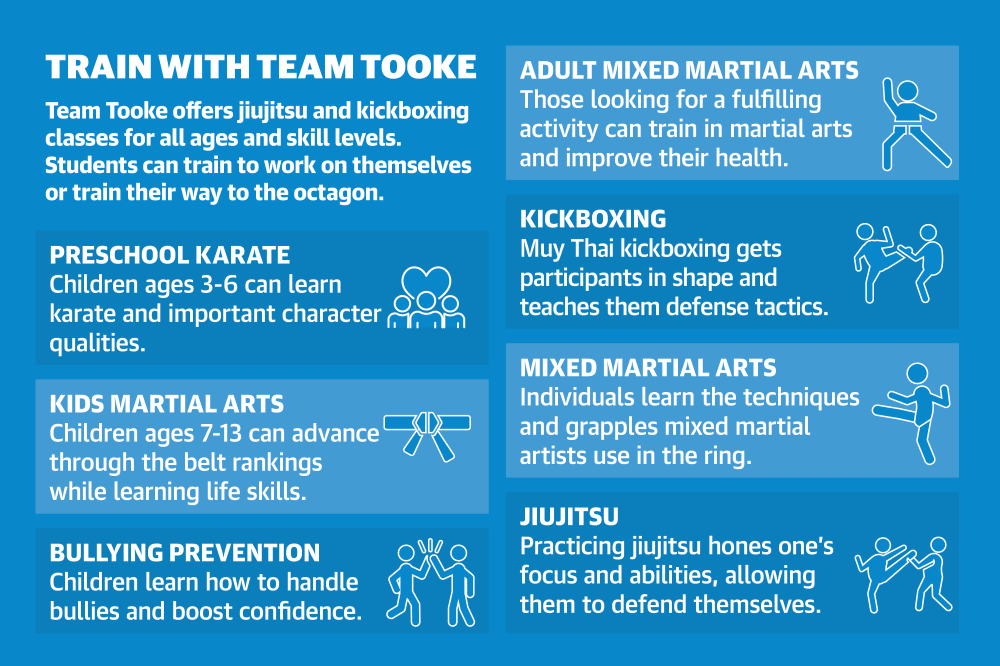