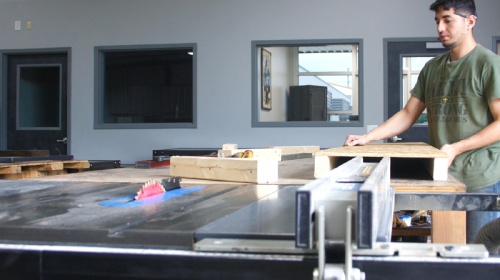 Garcia said the company will ship a custom-designed piece of furniture anywhere in the world, as long as the buyer will pay for shipping.

What started as a side project out of Jose Garcia’s Cypress garage just over five years ago has since turned into a business that ships custom-designed home, office and retail furniture pieces from Sugar Land to Singapore.

Garcia has built a custom cabinet for Netflix and a television stand that will be used on the set of yet-to-be-released action film, “Soul Drift.” He said he believes his business fills a need in the marketplace.

“[That] kind of says something about what we’re doing because that means that, through all the online shopping they’ve done, they can’t find it,” he said. “You can’t find this furniture anywhere else.”

Garcia, owner and founder of Modern Industrial Furniture, along with a small handful of shop workers, builds anything from media consoles and bar cabinets to headboards and desks out of a 5,000-square-foot warehouse on Jones Road. Moving forward, Garcia said he hopes to focus on residential customers.

Garcia said he defines “modern industrial” as industrial-style furniture for the modern world—a style reminiscent of something built 100 years ago, but constructed with modern features and capabilities. He said he made a few pieces per year from 2013-15 as a side business, putting them up for sale on platforms such as Craigslist.

He started hiring more workers at the beginning of 2015 as demand increased. Three years later, he left the technology industry to pursue Modern Industrial Furniture full-time.

“I finally came to the realization that this business needs more than just a little workshop at a house,” he said.

Garcia’s father—also named Jose—was a career welder and retired around the time the business began to gain traction. Jose Sr. now serves as a mentor and shop helper.

Garcia said he sees each piece as a learning experience. He said he gets a lot of satisfaction out of seeing a piece of furniture he made become the focal point of a house or retail space.

“I treat every piece that we make as if it’s for me,” he said. “For [a customer] to put faith in me to do something … that I never thought I’d be doing is a really nice reward.”