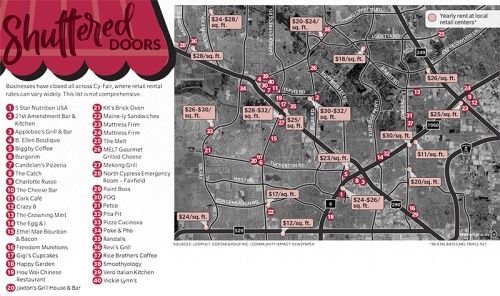 
At least 40 Cy-Fair businesses have closed since January 2018 as members of the local business community said competition is growing, and the cost to run a business is increasing.

Closures have hit businesses from small, family-owned operations to major national retailers. Leslie Martone, president of the Cy-Fair Houston Chamber of Commerce, said the combination of rising expenses and competition can be especially difficult for local business owners to navigate.

“[The] cost of doing business is too high, and the numbers of people needed to make the numbers work is too low,” she said. “For example: A retailer who is competing with an Amazon is not going to get the numbers of customers to make their formula work for a profit.”

Local small-business owners expressed concerns about high rent costs in certain parts of Cy-Fair as well as threats from major chain businesses that have resources to attract more customers. Since 2013, retail rental rates in the Cy-Fair area have increased by about 33%, according to data from the commercial real estate company CoStar Group Inc.

Rates peaked at around $24 per square foot in late 2015 and early 2016, when up to 44 buildings were under construction at one time, according to CoStar. By the end of 2018, Cy-Fair’s total retail building inventory reached 1,036, and more are under construction. Occupancy rates during this time remained steady around 95%-96%.

Troy Boyce, who owned and operated The Cheese Bar in Cypress for 2 1/2 years, said families risk everything they have to open a business, and they depend on the public’s support to keep the doors open.

“I want people to know that we’re real people behind the business. There’s nights that we don’t sleep because we’re waiting for the money we made yesterday to come in so we can pay checks tomorrow,” he said. “There’s families behind the name. The restaurant business is not for the weak.”

Boyce opened The Cheese Bar in May 2016 at the Boardwalk at Towne Lake with a focus on gourmet cheeses and wines. When planning the business, he said demographic studies and business advisers led him to believe the Boardwalk would be the perfect location to open the shop.

“We chose that location because we were promised a lot of things,” he said. “It was supposed to be the up-and-coming place. We were supposed to have a lot more anchored tenants coming in to supply us with guests. That just never transpired, so [traffic] was one of the struggles.”

Because of the lack of foot traffic at the Boardwalk, Boyce adapted his business plan to attract more customers to pay the bills. He said rent in this location was $47 per square foot each year—about twice the average in Cy-Fair, according to data from CoStar.

Officials with Caldwell Companies, which developed the Boardwalk and leases space there, did not confirm the cost of rent at the Boardwalk but said its rates are comparable to other similar mixed-use developments across the Greater Houston area.

Retail rental rates average around $22 per square foot per year but vary by location and construction dates throughout Cy-Fair, according to CoStar data.

Ultimately, Boyce said he was forced to close The Cheese Bar’s doors in October 2018. If he could go back, Boyce said he would have picked a different location but also said he does not blame the developer for the closure and appreciates the chance they gave him to pursue his dream.

“We probably could have done some things different, but I’m not really sure what else I could have done,” he said. “It would have been a smaller location, and it would also not have been in a new complex but an established complex.”

When looking for tenants to fill space at the Boardwalk, officials said they look for proven operators.

“Whether that be a national brand or a boutique business, just somebody who really can come in and know what they’re doing when they get here and be able to adapt to the market around them,” said Mary Caldwell, senior vice president of brokerage services.

While businesses such as The Cheese Bar and Jaxton’s Grill House & Bar have closed in the last year, new tenants Ambriza Social Mexican Kitchen, CoCo Crepes, Waffles & Coffee and The Union Kitchen are working to open this summer. This turnover process is normal, Caldwell said.

Cy-Fair restaurateur Joe Duong has opened and closed several restaurants in Cy-Fair, including Melt Gourmet Grilled Cheese on Telge Road and a location of The Shack Burger Resort on Mueschke Road.

Duong still runs the original location of The Shack on Cypress Rosehill Road on property that he owns instead of leases. Duong said he learned a lot from his experiences running different types of restaurants in Cy-Fair, and is using his knowledge to focus on The Shack.

Duong said his mortgage payment is less than monthly rents he has paid when operating out of shopping centers in the past.

“The corporate people can afford that, but the small mom and pop [businesses] have so much else we have to pay,” he said. “The rent will kill you if you go into a big space with a big anchor. You might make a little bit, but you don’t make enough.”

From small, locally owned operations to major chain retailers, all types of businesses have closed in Cy-Fair in the last year. In addition to increasing competition, the community’s layout could hurt businesses as well, according to experts.

“One challenge for many businesses is driving traffic to their locations,” said Karen Sharp, a business adviser with the Small Business Development Center through Lone Star College. “We are spread out without a centralized business district in the Cy-Fair area. Additionally, the locally owned businesses are competing more and more with national brands, which are moving into the area.”

Community Impact Newspaper conducted two unscientific surveys from April 24-May 3 targeting Cy-Fair communities on Nextdoor, a neighborhood-based social networking site. The first survey asked respondents to give their opinions on what types of businesses have oversaturated the Cy-Fair market, and the second invited respondents to share what types of businesses they believe are lacking.

Boyce said major national restaurant chains have a better chance of surviving because the money that comes in from high-performing locations can make up for any losses caused by the low-performing ones.

While multiple businesses at Cyfair Town Center off Hwy. 290 and Spring Cypress Road have closed in the last year, this tenant turnover is normal for such mixed-use developments, said Ivy Greaner, the executive vice president and chief operating officer at InvenTrust Properties, which oversees leasing there.

Greaner said Cyfair Town Center has faced challenges that are typical for landlords in the area—including road construction, a shift in consumer preferences and store closures.

However, the center has maintained a 95% occupancy rate and replaced all the businesses that have closed within the last year, she said. New tenants include Regions Bank, Gooey’s Ice Cream Sandwiches, uBreakiFix, and Corky’s Ribs and BBQ.

Although Greaner did not specify rent costs at Cyfair Town Center and other properties under InvenTrust—including Eldridge Town Center and Windermere Village—she said they are comparable to local market rates.

“There are many reasons that retailers may close their businesses, and many are not market related—they may have modifications in corporate strategy or changes in operational performance,” she said.

The Cy-Fair Houston Chamber of Commerce has several members who are business coaches and hold free seminars for members, Martone said. She said a simple change can have significant results.

“We have seen a lot of businesses have creative hours; not all restaurants are open for lunch and dinner,” she said. “More and more restaurants are advertising their catering services to supplement the walk-in traffic. Also, some of the retailers are having that online presence to compete with Amazon.”

The SBA offers mentoring and assistance for small business owners through partners such as the SBDC.

After examining a company’s financial reports, Sharp said advisers can identify cost-cutting measures that can be taken—including personnel costs and marketing spending.

“Operating a business can be and is risky,” Sharp said. “Though it will never be risk-free, we try [to] mitigate some of those risks by serving as a trusted adviser to our clients.”