Brew:30 Taphouse celebrates one year of business in Cypress 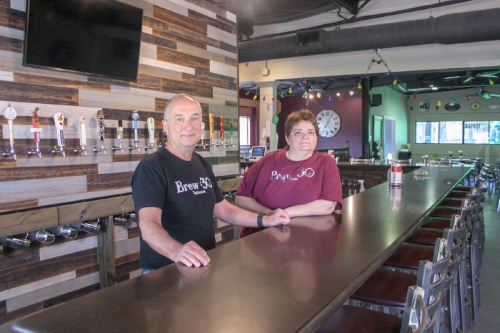 Gary Marler and Tiffany Richie opened Brew:30 Taphouse in spring 2018 on Telge Road in Cypress with an indoor lounge and an outdoor patio.

With 30 rotating taps of craft beer, Brew:30 Taphouse touts selections of Houston-area beers as well as unique brews from across the U.S.

“You’ll only find the independent brewers on our wall,” co-owner Gary Marler said. “We are loving teaching people about craft beer. People are almost surprised that they can get craft beer out this far from inside the 610 Loop—pleasantly surprised.”

Marler said when he moved to Houston, the craft beer options were bleak compared to what he was used to in Portland, Oregon, but he recognized the market had opportunity for growth.

He ultimately decided to leave the corporate world to venture into the industry himself. He connected with Tiffany Richie, a former owner of Cypress burger joint Rockwell Grill, which closed its doors in October 2016.

“When we closed Rockwell, Gary reached out, and we started working on the project from there,” she said. “He had the interest in doing something like this, and I had the industry experience, so it became a good partnership.”

Brew:30 Taphouse opened in April 2018 with a pet-friendly outdoor patio and an indoor lounge, which has since increased seating capacity to accommodate a growing clientele, Marler said. Customers can bring their own food or grab a bite from The Rock food truck—a permanent fixture as of last fall run by the former owners of Rockwell Grill.

Richie said not only are events designed to attract people with varying interests, but the ever-changing tap list also has something for any taste—including wines and ciders on draft.

“We have something for everybody—from your introductory beer drinkers to your hopheads to your thick, chewy stout drinkers,” she said. “We’re looking for stuff that you can’t just find everywhere.”

Marler said he is hopeful that by the end of this year, Brew:30 will be brewing its own beer on-site and offering it exclusively from the taproom.

“We’ll probably cover the majority of the styles,” he said. “It’ll mostly be trying different flavors and making fun things.”