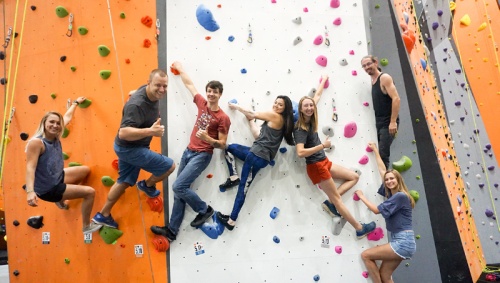 Five years after Bryan Robins became a member of InSPIRE Rock at the facility’s Spring location, he found himself leading the effort to expand into his own neighborhood in Cypress. Robins, along with owner Paul Short, opened InSPIRE Rock Cypress on Aug. 25.

“The fact that we can bring this here in Cypress, where we live, is exciting,” Robins said. “This area in Cypress is family-focused. My two kids are competitive climbers. It’s a family passion and adventure for us.”

Located within a sports and business complex on House & Hahl Road near Fry Road, the Cypress facility boasts 24,000 square feet of climbing walls. Some of the walls rise as high as 63 feet, making them among the highest available walls in the Greater Houston area, Robins said.

“These are likely the highest climbing walls in Texas,” he said.

The open-concept two-level gym houses two yoga studios that can be rented out on weekends for birthday parties, Robins said. A 12-foot-high bouldering section outfitted for beginners is situated on the second floor and has mats specifically designed for safety in falling, he said.

“My kids have helped test our routes, especially our youth routes, which allow for the smaller arm spans than adults have,” Robins said.

All routes are color-coded and labeled in a difficulty scale. The difficulty level of the various walls is not about the height, Robins said.

“The height is a mental thing,” he said. “It’s more about the size of the holds. Some of the holds feel like a handlebar; others are harder to grasp.”

Two walls on the ground floor feature a MoonBoard, a 40-degree bouldering training wall that has built-in LED lights that light up specific routes when a climber connects the board to a phone app. The gym also features a World Cup wall for competitions that call for gymnastic-type moves. Youth and teen competitors can train on this wall, Robins said.

The routes on a section of the gym are changed week to week so visitors have something new to try or work on every time they come in, Robins said. The other routes are reconfigured every seven weeks or so.

The gym has 28 part- and full-time staffers who can supervise climbers to help people with knots and make sure climbers are not doing anything incorrectly, Robins said.

Scott Tarbox, a rock climber and street artist based in Houston, painted floor-to-ceiling murals on a few of the climbing walls, adding a splash of youth and humor to the orange, gray and white graphic angles of the facility. A coffee and smoothie bar on the ground floor will also sell nitro-brewed and cold-brewed coffee, snacks and pastries. At the gym entrance, a pro shop will sell equipment and clothes for new and experienced climbers.

Youth teams and classes are available for all levels of climbers, so trained professionals can help climbers meet their goals, Robins said.

“Just because you are not getting that goal today, it does not mean you aren’t going to reach that goal tomorrow,” he said.