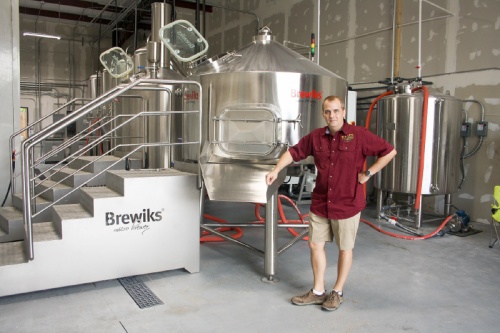 After two decades of homebrewing, studying the process and working at several Houston-area breweries to get commercial experience, Thomas Lemke will soon accomplish a longtime goal: opening his own neighborhood brewery.

“I’ve been wanting to do this since college,” he said. “I saw this homebrewing kit for sale in the back of a magazine and saw that you could make your own alcohol legally. I was very interested in that.”

A hobby turned livelihood, Klaus Brewing Company is slated to open in September with German-style brews and a vision to develop a following among craft beer fans. Lemke said he also wants to raise awareness of German-style beers, a style which he said he believes is underserved in the U.S.

“There are a lot more styles that people are aware of,” he said. “German beers tend to be very drinkable, very balanced. We figured that would be a good thing to bring to the market.”

The brewery will initially release four to five beers—including a kölsch, hefeweizen and an altbier—Lemke said. The next phase could be a “tour of Europe” series featuring Belgian, English, Czech and Slovenian influences. Later, an “across the pond” series could include American IPAs and Mexican lagers.

Pints will cost around $5, and Lemke said he ultimately wants to offer $3 half-pints and flight options for customers to sample different beers.

An air-conditioned taproom will allow patrons to escape the heat in the summer, but Klaus will also feature an outdoor beer garden with food trucks, games and occasional live music.

Lemke said he wants to create a welcoming environment for locals to enjoy beer that was not a smoky, dark bar. He said he is also transforming an empty space next door into a private event facility available for rent.

When naming the brewery, Lemke said he wanted to choose a strong German name. He landed on Klaus, which also happens to be his son’s name.