The Craft Cigar Company opening this weekend in Cypress 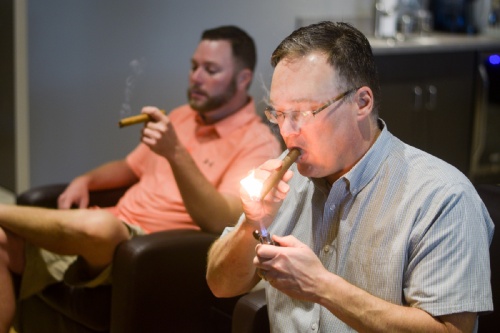 With a love for cigars and a desire to provide a space for aficionados and novices alike, brothers Justin and Jason Curran plan to open The Craft Cigar Company soon in Cypress.

Once open, the business will sell a variety of cigars and cigar products, including lighters and cigar cutters. The shop itself will feature a lounge with space to relax and a humidor, a humidity-controlled room for cigar storage.

“The thing that I found while I was out here is that any time I wanted to get a cigar, I had basically two choices that were close to me; I had Spec’s or I had the gas station that had four cigars,” Justin said.

The cigar shop aims to broaden the horizons of all levels of smokers, and Jason said he and his brother can recommend brands based on taste and preference.

The shop will have a variety of cigars ranging from popular brands to rare finds, a decision Justin said is intended to appeal to new cigar enthusiasts, seasoned connoisseurs and customers looking to buy gifts.

“One of our goals ... is to inform people about the brands that are out there that some people wouldn’t normally go into because they’re used to your standard older brands that have been around forever,” he said.

The Craft Cigar Company will also feature a members-only lounge with couches, coffee, a TV and board games. Jason said customers will be able to bring their own alcohol to the lounge as well. The atmosphere is meant to provide a relaxing break from the day where members can hang out in the company of fellow enthusiasts, Justin said.

“People are smoking for all reason[s],” he said. “Cigars are one of those chances where you get to break away for a minute.”

Overall, the brothers said they look forward to sharing their love of cigars with the Cy-Fair community.

“It’s very much a celebration type of thing for a lot of connoisseurs,” Jason said. “In your life, when are those happy moments? For a lot of people, [cigars are] a certain slice of happiness.”