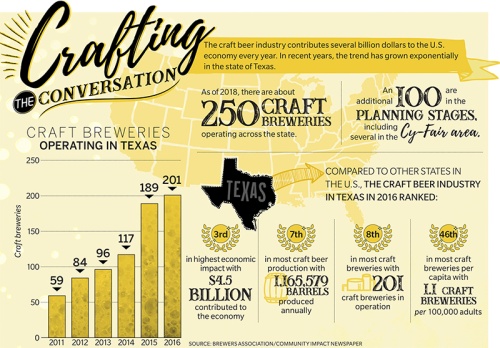 Until about three years ago, Cy-Fair residents had to drive into the city of Houston to find the closest craft brewery. Since then, four craft beer businesses have opened, and several more have announced plans to bring their services to the community in 2018.

There are about 250 craft breweries operating across the state—up from 59 in 2011, according to the Brewers Association, the trade association representing small and independent craft brewers nationwide.

Charles Vallhonrat, executive director of the Texas Craft Brewers Guild and a Cypress resident, said while Texas is known for “regressive” alcohol laws, significant progress made in the state’s 83rd legislative session in 2013 has led to industry growth.

“In 2013, there was legislative progress that changed the structure of the law for some brewing licenses,” he said. “It lowered the barrier of entry from the brewer’s perspective and made an easier path to profitability through the changes to the permits and licenses.”

As a result, many manufacturing brewery license holders in the state are making the switch to brewpub licenses, and new brewpubs have emerged in this more hospitable environment, Vallhonrat said.

“[Local breweries] bring in people to a central place to get to know each other better, and they promote local community,” he said. “The outward reach of the craft brewery is pretty substantial—it brings in revenue and jobs.”

Brewers local to Cy-Fair are taking advantage of lighter restrictions. After more than 20 years of homebrewing, Thomas Lemke, whose background is in business and finance, is working to open German-style craft brewery Klaus Brewing Company this summer on Jones Road near Fallbrook Drive.

Lemke said many startup breweries receive a brewpub license instead of a manufacturing brewery license because it gives them more flexibility in how they can get their products to market.

“It gives you every avenue possible to make money,” he said. “There are a lot less restrictions now.”

Brian and Jamie Cain opened Cypress’s first brewery—Wicked Boxer Brewing—in December on Mueschke Road. The couple said they plan to operate on a small scale at first and eventually grow to distribute to local restaurants, bars and grocery stores.

Meanwhile, Tiffany Richie, former owner of Rockwell Grill in Cypress, partnered with Gary Marler on a new venture to open Brew:30 Taphouse on Telge Road in April. The family-friendly venue allows customers to discover new craft beers and take their favorites home in crowlers—32-ounce aluminum cans that are filled and sealed on-site that were legalized in Texas in November 2016.

Marler said it took seven months to find a location that fit not only their vision—complete with 30 rotating taps, indoor seating and an outdoor patio with space for food trucks and yard games—but also to fit the requirements of the Texas Alcoholic Beverage Commission. Selling alcoholic beverages is not permitted within 300 feet of a school, church or public hospital.

“We’re going to open as a bar in the beginning, and Phase 2 is a nanobrewery,” Richie said. “It’s a lot easier to get that licensing once you have a beer and wine permit versus starting the brewery permit from the very beginning.”

Baker said 11 Below plans to produce about 3,000 barrels this year. He expects the business to eventually exceed the 10,000-barrel limit, at which point they will transition back to the manufacturing brewery license.

“A lot of breweries have done this now—starting off as a brewery and then going to a brewpub,” he said. “All breweries should be able to sell beer to go, but Texas laws are all jacked up.”

While several breweries are starting small in Cy-Fair, the same businesses could face challenges if they grow to a certain size. In 2017, the Texas Legislature passed House Bill 3287, which Vallhonrat said could hurt a craft brewery’s ability to expand.

Under the new law, breweries that produce 225,000 barrels annually across every site they or their investment partners own have to pay distributors a fee to deliver products from their production sites to their own taprooms, Vallhonrat said.

“So effectively, that law provides revenue for somebody who does no actual work on the sale of the product,” he said. “We were against that, but unfortunately the distributor lobby is powerful enough and created enough misinformation at the Capitol to pass it.”

“HB 3287 was very important to maintaining the competitive beer market in Texas,” said Rep. Gary Elkins, R-Houston, a co-author of the bill. “The bill prevents large mega-breweries from owning or operating a taproom or bar [and]  prevents mega-brewers from becoming beer distributors. The independence of market participants in the beer industry is imperative to preventing monopolies and vertical integration.”

While none of the Cy-Fair breweries are large enough to be hindered by this legislation, it could keep them from growing to a certain level, Vallhonrat said. He also said this is significant enough to drive potential business away from the state of Texas.

“Texas has a reputation for being open for business unless it’s a craft brewery,” he said. “We don’t make it easy to sell craft beer in the state of Texas and even within our own breweries when they grow to a certain level. Sometimes, it’s easier to go out of state.”

Vallhonrat said there are benefits to opening breweries in unincorporated Harris County as opposed to in the city of Houston, which has stricter zoning laws.

However, the permitting process can still be lengthy and tedious, local business owners said.

“Those challenges with the county—getting the right form into the right place at the right time in the right order to get your inspection[s]—it’s a lot of hoops to jump through,” Richie said.

Marler said, in the beginning, he and Richie were looking at strip center locations that would only work as taprooms. When he learned they would have to rent a completely separate site to ultimately brew their own beer, they began to think bigger to manage costs.

While the two wait to brew their own beer on-site, Marler and Richie said they will support independent craft brewers locally and across the country by serving their unique and hard-to-find brews.

“I know from talking with several breweries that getting a license for the production facility is a minimum of a year and could range from 14-16 months,” Marler said. “We’re going to apply for a brewpub license... and we’re hoping that’ll be shorter than a year.”

From suburban families to millennials moving to the area, Leslie Martone, president of the Cy-Fair Houston Chamber of Commerce, said she believes new breweries are targeting the right demographic in Cy-Fair.

“I think the craft beer option is something new and different than just going to a restaurant and/or bars,” she said. “From the people I’ve talked to and the number of people I am standing outside with [at local breweries], I think Cy-Fair people like it a lot.”

“Over time, every little region of Greater Houston will have its own brewery as long as people keep supporting it,” Baker said. “There’s plenty of room for that, and in Cypress, there’s definitely a consumer base. As long as the liquid’s good, then people will come check it out.”

In the meantime, Vallhonrat said the TCBG will continue to support pro-craft beer legislation and candidates via the CraftPAC, a political action committee that was formed following the 2017 legislative session.

“We continue to focus on our No. 1 priority, which is to lose no rights and keep at least the status quo—if not make things better,” he said.