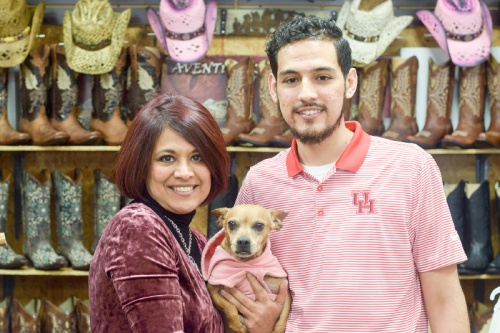 Laura Perez and her son Sergio Ramirez own and operate Lagarto Boots and Western Wear.

Tucked into a strip center next to a Shell gas station near Coles Crossing, Lagarto Boots and Western Wear offers boutique-style experience for boot aficionados and novices alike.

Lagarto is owned and operated by Sergio Ramirez and his mother, Laura Perez. The shop, which opened four years ago, specializes in boots for men, women and children as well as Western-style clothing, including cowboy hats, belt buckles and matching shirts.

Ramirez said the Lagarto brand is original and has belonged to the family for more than 20 years.

“My dad has been in the Western wear business since before I was born,” Ramirez said. “He was manufacturing the boots in Mexico, and he was selling them to a bunch of little stores all over the country.”

Ramirez said he has been working with boots since he was a child, dating back to when his family was selling them in flea markets around Houston. Over time, Ramirez said he has learned the background of each kind of boot and the process of making them.

Patrons at Lagarto can customize various elements of their boots, including skin type, patches and boot style. Many people also come in to have their boots modified—heels shortened or boot caps fixed, among other procedures, Ramirez said.

Because of a close relationship with their manufacturer in Mexico, Lagarto’s owners are able to provide quality boots for a cheaper price, Ramirez said. The shop is able to get various styles of boots and sell them at a lower price than traditional stores, he said. Ramirez and Perez choose the designs for the boots.

When customers enter the shop, Ramirez walks them through the process of buying boots, which he said is his favorite part of the job. Ramirez said he and his mother cater their business to both new customers and old ones.

“You have to know who your customer is and what your customer values so you’re able to deliver a product that’s going to be outstanding and have them coming back,” he said.