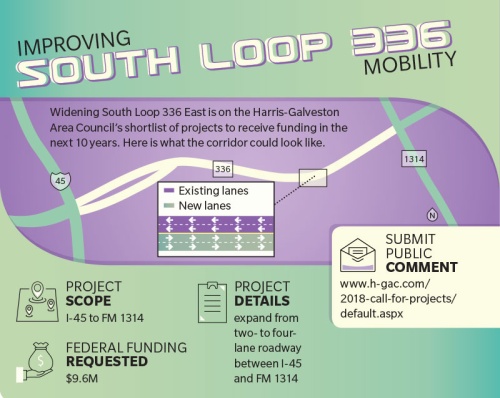 Congestion along South Loop 336 East in Conroe could soon see some relief: The Conroe project was ranked among top Greater Houston-area road projects by the Houston-Galveston Area Council that could receive federal funding by 2028.

After receiving 193 submissions, the H-GAC released a draft of project rankings Jan. 16 that could be funded with roughly $920 million, including federal funding and state and local matches.

The H-GAC considered factors including how much the project would enhance mobility, economic competitiveness, planning coordination and environmental factors. According to the report, projects that scored more than 150 out of a possible 200 points across four metrics appear to be fundable.

The Texas Department of Transportation’s proposed project to widen South Loop 336 East between FM 1314 and I-45 scored 187 out of 200.

The $9.6 million proposal includes widening the road from two lanes to a four-lane divided road by 2022.

Conroe Director of Engineering Tommy Woolley said the city submitted the project to TxDOT with the hope federal aid could improve mobility along the heavily trafficked corridor.

“The new lanes would serve as the eastbound lanes with the existing lanes being converted to serve westbound traffic,” he said. “This added capacity should help with current congestion and mobility.”

Texas A&M Transportation Institute’s 2018 list of the top 100 most-congested roads in Texas reported drivers on South Loop 336 experienced 35,325 hours of delay per mile—or the number of hours spent on that stretch of road annually by all drivers combined.

Six other Conroe-area projects were also ranked by H-GAC, including an expansion of FM 830 from Old Montgomery Road to Hwy. 75, adding traffic signals on Hwy. 105 from Fostoria Road to FM 1486, extending FM 1314 and widening Airport Road. Yet the South Loop 336 widening is the only Conroe-area project that scored above 150.

“We felt like all six projects should have ranked higher, but we understand that our projects are competing with ... Harris County and the surrounding counties,” Woolley said. “We will work with H-GAC staff to what areas we can improve in to improve our ranking.”

Public comments can be submitted online, by mail or by phone through Feb. 28. Following public comment, H-GAC will finalize the selection for the 2019-22 Transportation Improvement Program, the 10-year plan and the 2045 Regional Transportation Plan.