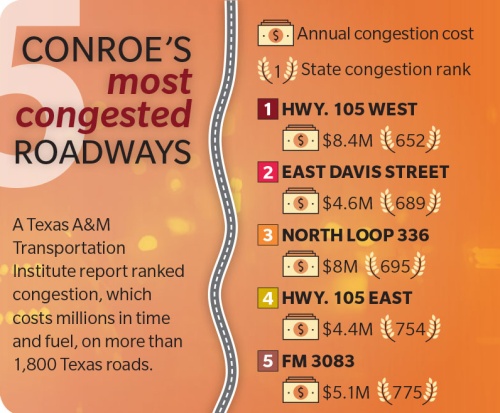 The cities of Conroe and Montgomery are partnering with state agencies to address increasing congestion on some of their most congested roadways.

TTI senior research engineer Bill Eisele said the report identifies the amount of time drivers spend on these roadways and how much money—or combined time and fuel—is wasted sitting in traffic every year. Eisele said the list is not comprehensive for all of Texas, as it includes roadways identified by local, regional and state transportation officials as problem areas—and excludes the city of Montgomery and other more rural areas.

“[Officials] are there at a local level not only finding out if we’ve identified the right roads, but if they believe we should add any roads, they can identify where construction is right now and if any major weather events contributed to the congestion,” Eisele said.

The city of Conroe has seen increased delays on its busiest roadways in recent years, according to TTI’s reports.

The most congested roadway in Conroe is Hwy. 105 West between I-45 and McCaleb Road, which experienced almost 54,000 hours of delays per mile annually and 31,446 vehicles daily, according to the report.

Conroe Director of Engineering Tommy Woolley said master-planned communities such as Grand Central Park along South Loop 336 West and residential neighborhoods such as Barton Ridge along South Loop 336 East contribute to the overall congestion. Roads like FM 3083 are used by vehicles trying to avoid congestion along Hwy. 105 and I-45, he said.

According to the TTI report, FM 3083 from Hwy. 105 West to North Loop 336 is Conroe’s fifth most congested roadway, with drivers spending an annual 44,556 hours per mile stuck in traffic.

“We try to get ahead of the curve when we see a development starting,” Woolley said. “We know it usually takes two to three years for them to build out, so that means we need to get started now so [in] two [to] three years we have roads to accommodate them.”

Some of the roadways identified in the TTI’s report, like FM 3083, are part of ongoing and long-term mitigation projects in the region. The Texas Department of Transportation is currently working to widen FM 3083 east of I-45 from two to four lanes, with phase one of the project set to be completed in fourth quarter 2019, according to TxDOT officials.

Moreover, FM 3083 west of I-45 to Hwy. 105 is also part of TxDOT’s long-term mitigation plan. The agency plans to widen the roadway from two to four lanes in the next 5-10 years, according to TxDOT officials.

Deidrea George, public information officer with TxDOT, said in an email the daily traffic count, roadway lifespan and pavement condition can influence the development timeline of a project.

“Projects are developed and prioritized from a combination of sources such as public and elected official requests, local government and TxDOT consideration,” George said. “Projects are then nominated and placed on the … 10-year plan to guide transportation development for future construction projects and related activities.”

Congestion along Conroe’s major roadways also correlate with TxDOT crash data. The city of Conroe receives average daily traffic reports as well as crash data to decide which projects to submit to TxDOT or the Houston-Galveston Area Council for state or federal funding, Woolley said.

Woolley said the city is prioritizing the intersection of South Loop 336, Hwy. 75 and I-45 due to its congestion and crash data. According to the TTI’s 2018 report, drivers on South Loop 336 East experienced 35,325 hours of delay per mile and spent $3.1 million annually on fuel and time spent in traffic.

Woolley said South Loop 336 is a priority because it is only two lanes.

“[TxDOT] did the schematic and had a public meeting to do that, so we’re pushing hard with TxDOT to get this moving forward,” Woolley said.

Although the city of Montgomery was not included in the TTI’s study, the city is also focusing on reducing congestion along its busiest corridor: Hwy. 105.

In fall 2017, the city of Montgomery partnered with Montgomery County precincts 1 and 2 to fund a mobility study determining the future needs of transportation. The study shows daily traffic volume at Montgomery’s intersections and projections of 2026 traffic volumes.

The study shows Hwy. 105 West at the intersection of Lone Star Parkway and FM 2854 is the most trafficked roadway in Montgomery, transporting 20,184 vehicles in a 24-hour period in 2015. The study estimated daily traffic will grow to 34,885 vehicles by 2026.

Montgomery City Administrator Jack Yates said the congestion is partly due to development on the city’s eastern border, such as the Buffalo Springs shopping center, and was exacerbated by
Lake Creek High School’s August debut.

“Since then, we’ve had a tremendous commercial development there at Lone Star Parkway and [Hwy.] 105,” Meador said. “There’s been some talk there needs to be another loop or half loop south of Montgomery from [FM] 149 around to [FM] 2854.”

The city wants to redirect truck traffic from Hwy. 105 to Lone Star Parkway’s north loop, Yates said, but the
right-turn lane on the northeast corner of the intersection is not wide enough for some trucks, so it must be expanded.

“We’re trying to encourage trucks to use Lone Star Parkway as a loop around the city, and we cannot require that right now because it’s not a state highway,” Yates said. “But in the long term, the city has been working with the Houston-Galveston Area Council and TxDOT to make Lone Star Parkway into a state-owned bypass.”

TxDOT included plans to create a right-turn lane on the north side of the intersection when the agency presented plans for a north FM 149 expansion in early 2018. When TxDOT agreed to delay the project to allow downtown business owners to prepare for potential loss of revenue during construction, Yates said the city requested  TxDOT install right-turn lanes on the southeast and northwest corners of
FM 149 and Hwy. 105 independently.

The city acquired the southeast corner property in October and plans to turn it over to TxDOT to build the right-turn lane. Yates said the city will demolish a building on the property, the Montgomery Auction Gallery, before the start of 2019.