The case of who killed Danny Johnson, a man who lived in the Conroe area, has grown cold, but Johnson's niece Alana Johnson said the family still desperately seeks answers.

For more than a decade, the case of who killed Danny Johnson has remained unsolved.

Johnson, a 58-year-old man who lived in the Conroe area, was struck and killed by a pickup truck at 11:05 p.m. Jan. 11, 2011, while he was walking on Old Houston Road near Porter, according to the Texas Department of Public Safety. He had gone to a nearby house for dinner and had been walking back to his home, Danny Johnson’s niece, Alana Johnson, said in an interview. The driver of the pickup fled the scene.

The DPS began working the case, examining the evidence and interviewing subjects. But interviews led to dead ends, and leads dried up, Alana Johnson said.

“Our family deserves justice,” Alana Johnson said. “We’d like to know who did this.”
RELATED STORIES

• City of Conroe purchases YMCA on Owen Drive for $2.5 million

• ‘We are good. We want to be great’: Montgomery ISD superintendent outlines district strengths, weaknesses, steps to improve

There are at least 61 other cold cases involving murder or missing persons in Montgomery County, according to records from the Montgomery County Sheriff’s Office. David Mittelman, CEO of Othram, a forensic lab in The Woodlands, said cases grow cold when there is no further evidence or leads. Police departments often have limited budgets for cold cases, and they usually rely on federal or state grants to fund the resources to investigate them.

The state also faces a backlog of DNA testing kits, including a backlog of 2,138 rape kits, according to End The Backlog, a nationwide nonprofit focused on reforming rape kits.

“You send your DNA to [the state] crime lab—best-case scenario you’re looking at a matter of three, four months ... to get any kind of answer back,” Texas Ranger Robert Bess said.

Despite the roadblocks, cold cases in Montgomery County have made headway. In February, Montgomery County Forensic Services, in partnership with Othram, used DNA technology to solve a 2016 cold case regarding an unidentified man in The Woodlands. And on Feb. 2, the sheriff’s office launched a new regional public information initiative, known as Cold Case Warm Up.

Cold cases will be featured on billboards throughout the Greater Houston area with contact details to submit tips. The first crime to be featured is the August 1995 murders of John and Pansy Stewart in Conroe.

“We would just like to see if we can find someone, somewhere that knows something about this crime,” the victims’ son John Stewart said. “We need closure.”

In 2006, the sheriff’s office was awarded a grant to investigate cold cases. Prior to the unit, which is staffed by two senior detectives, detectives were not specifically assigned to cold cases, Lt. Scott Spencer said. 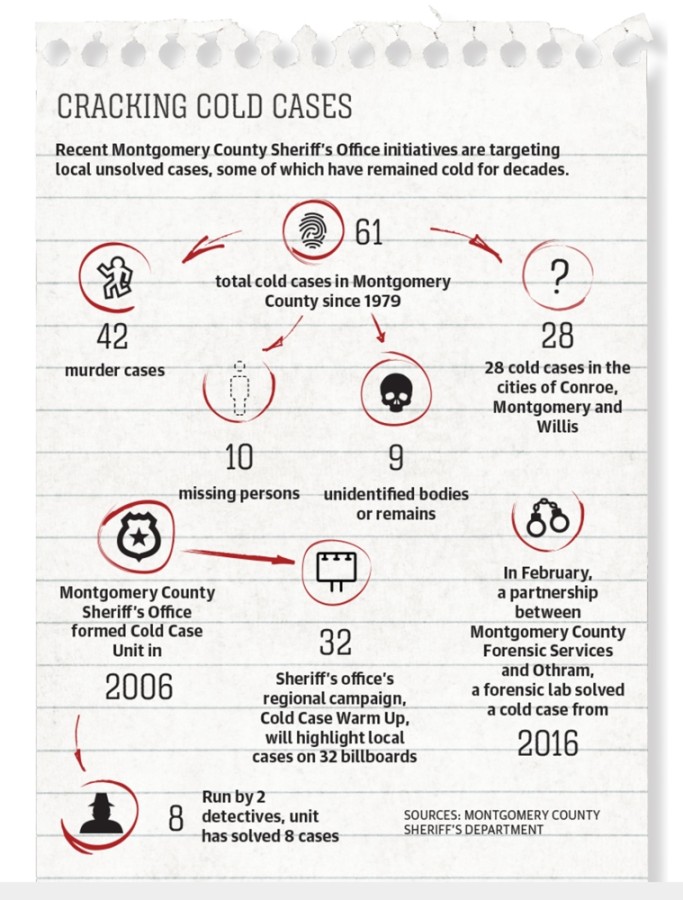 There are 28 cold cases in the cities of Conroe, Montgomery and Willis, according to records from the sheriff’s office. The oldest case in the county is the 1979 sexual assault and murder of 12-year-old Lesia Jackson, whose remains were found in Conroe.

Notably, serial killer Henry Lee Lucas confessed to four Montgomery County murders between 1980-83. However, Lee Lucas later recanted, and it is believed he is not responsible for most of the crimes he confessed to, according to sheriff’s office records.

The billboard campaign, which is intended to raise public awareness on select cold cases, is a partnership between the sheriff’s office, advertiser Clear Channel Outdoor and the nonprofit Multi-County Crime Stoppers. Crimes will be broadcast on 32 billboards on a quarterly basis, and cases that could benefit the most from exposure will be chosen, Spencer said. The first victims to be highlighted—John and Pansy Stewart—were found deceased in their home on Foster Drive in Conroe on Aug. 15, 1995. Both had been shot multiple times, and several items were stolen, according to the sheriff’s office.

“We have kept this case open trying to develop leads,” Sheriff Rand Henderson said. “As the years have gone by, that has become more difficult.”

Lee Vela, vice president of public affairs for Clear Channel Outdoor, said billboards are an effective way to broadcast public safety messages. About five years ago, the company ran a rendering of a suspected serial rapist for a case in Harris County that had sat cold for 18 months.

“Within three weeks, someone had turned [him in],” Vela said.

Reopening a cold case requires an extensive review process, said Bess, who has solved decades-old cases and once worked on a cold case in Montgomery County. 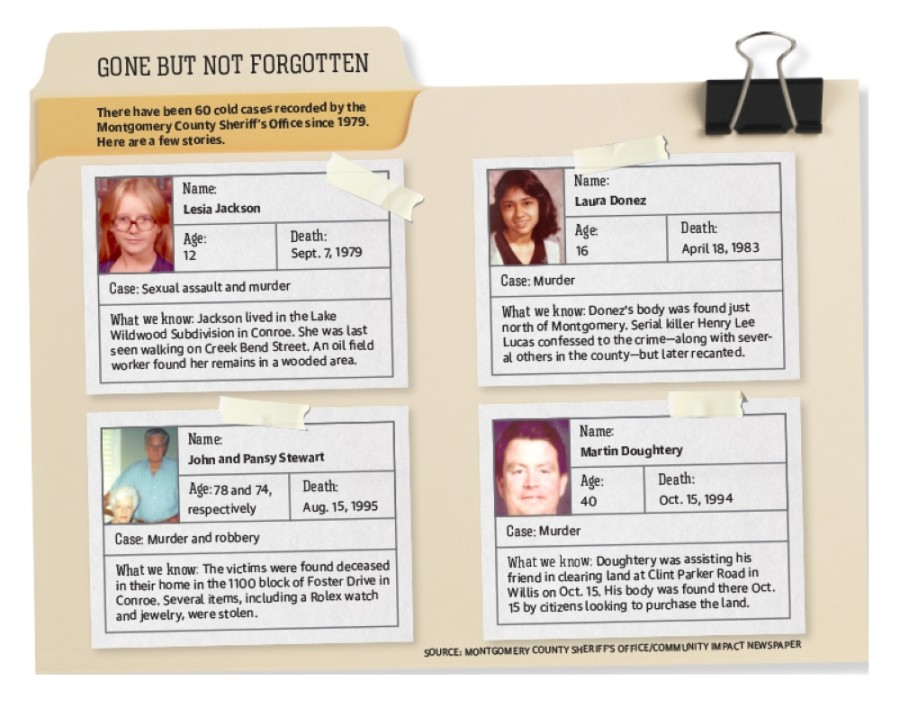 Bess said police who originally worked the case usually have done everything they could in terms of traditional police work. The key to look for is DNA evidence that has not yet been tested.

“In 1991, blood typing was what they did,” Bess said. “We do things totally different now.”

“This is helpful in numerous types of cases, including unidentified skeletal remains and murders,” he said.

Since 2006, the Cold Case Unit has cracked eight cold cases: Two involved identifying skeletal remains, and six led to the identification of a murderer, according to Spencer.

Sometimes the use of less traditional technology is needed. In late 2020, Montgomery County Forensic Services, which conducts autopsies for the sheriff’s office, partnered with Othram after traditional forensic evidence analysis failed to generate leads. The case was to identify the body of a deceased man who was found by kayakers in a reservoir in The Woodlands in 2016.

Traditionally, Mittelman said forensic evidence is uploaded into the Combined DNA Index System, a national database. CODIS collects 20 markers from DNA to construct a profile, and it can be used to match persons if their DNA or a close relative’s DNA is in the system.

The case is just one of over a thousand statewide. According to the National Mission and Unidentified Persons System, there are 1,518 missing persons cases and 1,656 unidentified persons cases in Texas.

Wading through a backlog

Despite recent efforts from law enforcement and the Texas Legislature, there is still a statewide DNA testing backlog, which hinders progress on cases, Bess said. 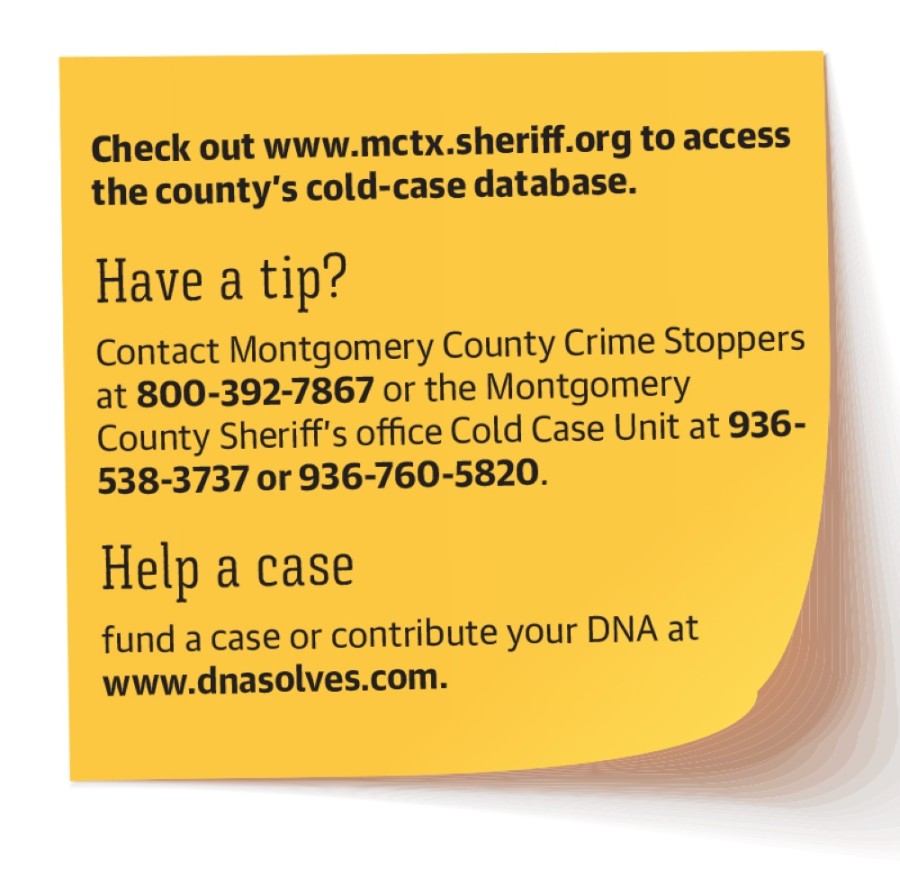 “You’re talking about a lab that’s intaking hundreds, if not thousands, of cases that are being submitted yearly,” he said. “Every police department in Texas is submitting everything they have to the state crime lab.”

The sheriff’s office submits evidence to both state and private labs, depending on their capabilities, Spencer said. Private labs such as Othram can step in if certain technologies are required, Mittelman said.

Bess said he feels the state is well positioned in terms of funding and policy, and the statewide backlog has improved in recent years. For instance, Texas has reduced its untested rape backlog kit from 18,955 in 2011 to its current 2,138, according to End The Backlog.

Texas has also enacted various laws to improve its handling of rape kits, including House Bill 8 in 2019. Under HB8, crime labs must test kits within 90 days, and agencies are prohibited from destroying rape kits related to a case that has sat unsolved for up to 40 years.

Bess said lawmakers are generally supportive of such efforts.

“Texas is a very good place for cold cases,” he said.

Ben Thompson contributed to this report.
SHARE THIS STORY