Editor's note: Montgomery County Precinct 1 Constable's Office reported another drowning this year on Lake Conroe on Aug. 15—after this story went to press. The victim, a 27-year-old male from Conroe, had reportedly jumped off a boat in the Atkins Creek area and never resurfaced. This story's headline was updated to reflect this new fatality.
Montgomery County’s Precinct 1 Constable’s Office received a call at 8 p.m. Aug. 4 about a drowning that had just occurred on Lake Conroe in Walden.

According to the constable’s office, witnesses said they saw the victim jump into the water and never resurface. Witnesses immediately plunged into the water in an attempt to locate him but were unsuccessful, according to the constable’s office. They called 911, and emergency personnel in boats started searching for the subject with side-scan sonar units.

At 8:28 pm, the victim—a 39-year old man from Montgomery—was recovered in about 6 feet of water.

It was the fourth drowning that resulted in death this year on Lake Conroe reported by the constable’s office, and it followed the drowning death of an 81-year-old man July 12.

The four known deaths on Lake Conroe this year make up about 8.5% of the total drownings across the state this year that were reported by the TPWD. During March and April, Texas experienced a roughly 45% increase in open water-oriented fatalities, including boating and swimming incidents, over the same period in 2019, according to the TPWD.

In addition to fatalities, the constable’s office tracks incidents when law enforcement was called to Lake Conroe for a possible drowning, near drowning or actual drowning. Since 2016, the constable’s office has reported at least 17 such incidents. In addition, law enforcement said boating accidents regularly occur on Lake Conroe, although Community Impact Newspaper has not been able to obtain this data as of publication time.

Lakegoers agreed as more and more people flock to the water over the years, the chance of an accident or fatality increases—and lake activity has skyrocketed as coronavirus restrictions took effect.

“You do see more boating activity in the last five years than certainly 10 years ago, [and] it is concentrated around weekends,” said Kevin Lacy, the president of the Lake Conroe Association, which represents residential and commercial interests on issues pertaining to lake quality.

As lake activity increases, law enforcement is buckling down. In 2017, another full-time deputy was added to the Precinct 1 Lake Division, bringing the total to six, Precinct 1 Capt. Joe Sclider said.

“Over the years, the county has invested in equipment [such as] new motors, boatlifts, technology [such as the] side scan sonar,” Sclider said. “We have upgraded the lake division offices and dock facilities.”

Although touted as a destination spot, Lake Conroe was a dry lake bed less than 50 years ago, designed as a reservoir shortly after the record seven-year drought of the 1950s, according to the San Jacinto River Authority.

Ben Richardson, who owns The Palms Marina and EZ Boat Storage on Lake Conroe, said he still remembers riding his motorbike as a child on the dry bed in the early 1970s. In 1973, the lake bed filled with water, and Richardson watched houses being built and visitors flocking to the lake over the decades.

“[It] used to be that Saturday mornings and Sunday afternoons were tolerable, but since 2008, we wouldn’t go on the lake during the weekends or holidays at all,” Lake Conroe resident Mark Fuller said in an email.

With the pandemic forcing residents to social distance, many have sought the open waters, officials said.

“In all my years working Lake Conroe, I’ve never seen it to be as busy as we have been since March,” Precinct 1 Lt. Tim Cade said.

Boating is not inherently dangerous, but it can be if individuals do not follow the rules. And as visitors flock to Lake Conroe, so do first-time boaters, officials said.

Lacy said he estimates the renter market has grown between 10%-20% in the last five years.

“Many people unfamiliar with the lake come here to rent boats,” he said. “If you combine those circumstances with any lapse in safety or drinking to excess, it is a bad recipe for staying safe.”

Of the 26 Lake Conroe drownings since 2010, nine reportedly involved alcohol, according to TPWD.

Further, individuals who rent boats out may not be following protocol. For an individual to rent out a watercraft, they must be licensed and go through a safety checklist with the renter to explain the locations of safety equipment and how to operate the boat, Sclider said.

“We’re seeing individuals renting out boats to people without any of this documentation, which would cause the people renting it to possibly get into trouble because they don’t know how to correctly operate the vessel. ... But also the people that are renting it ... can be held liable if something happens,” he said.

The second drowning that occurred this year, on June 7, was a woman who would have turned 21 the next day. Her family and friends had rented a pontoon boat to spend the day tubing on the lake, according to the TPWD. At about 5:34 p.m., witnesses said the victim—who was not wearing a life jacket—fell from the tube, submerged and was never seen again.

Laws of the lake

In 2015, the constable’s office took over the lake patrol division, which had previously been a shared responsibility with the sheriff’s office. Now, Precinct 1 works in conjunction with the SJRA, and everyone in the department is marine safety certified, Sclider said. At least one member of the lake patrol is out on the water at any given time. 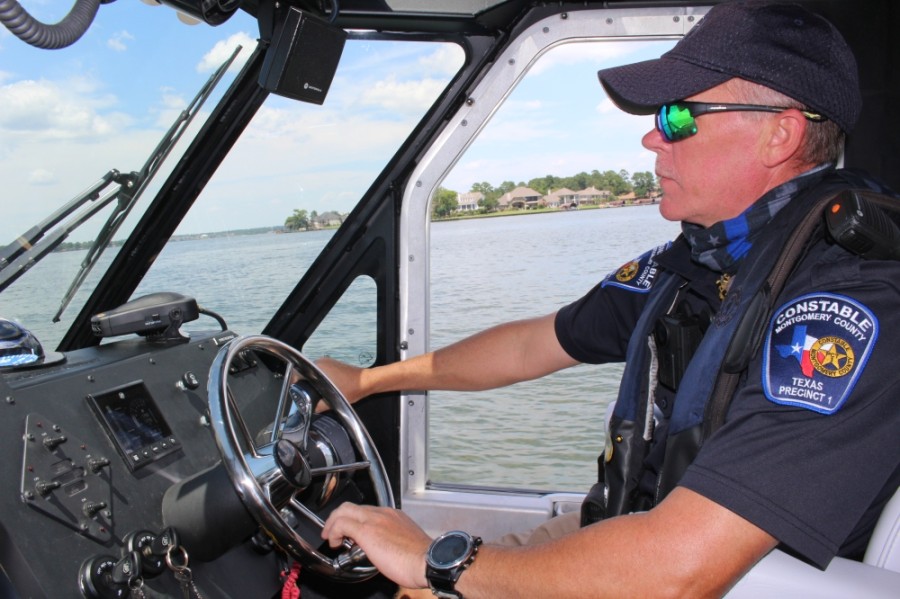 “We go out and do safety checks prior to the people getting on the water. We make sure they have the items they need,” he said. “It’s all voluntary.”

Items that individuals are required to have on a boat include a kill switch or lanyard, a personal flotation device for each passenger, a fire extinguisher and the registration card for the vessel. Violating the checklist can lead to a $200 fine, Sclider said.

From January to July 29, the department issued 200 citations related to violating safety rules, such as operating a boat without a permit or without a life jacket, Sclider said.

Of the 200 citations, 95 were for missing items on the checklist.

Deputy Joey Ashton with the lake division credits a life jacket as the reason he is still alive today.

In 2010, Ashton—who was working for the district attorney’s office at the time—was training on Lake Conroe for a kayaking expedition when a cold front came in. The water temperature fell to 53 degrees Fahrenheit. The wind picked up. A strong wave came in and drenched the kayak. Then a second wave hit and threw Ashton in the water.

Ashton, who was wearing a life jacket, said he managed to make a phone call even as hypothermia began to kick in. A rescue boat came and pulled his numb body out of the water, and the brush with death inspired him to rescue others, he said.

“It came full circle,” he said. “The same boat that rescued me out there on that horrific day, I’m now the captain of that vessel.”