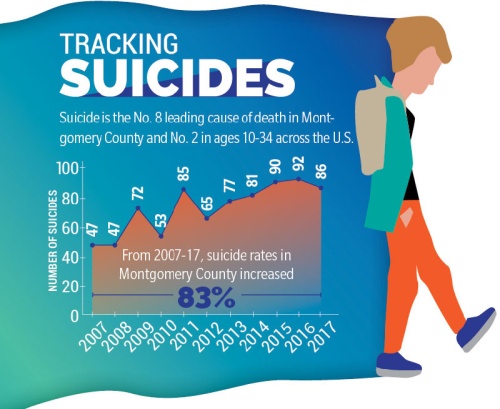 With reported suicide and attempted suicide rates increasing in Montgomery County and throughout the state of Texas—particularly affecting younger generations—local and state officials are examining strategies to address mental health.

Suicide is now the No. 8 leading cause of death in Montgomery County as of 2017. The county saw an 83% increase in suicide-related deaths over 10 years—up from 47 deaths in 2007 to 86 in 2017—according to the Centers for Disease Control and Prevention.

CDC data shows suicide as the No. 2 leading cause of death in Texas and in the U.S. for people ages 10-34 in 2017. The year also marked the first time suicide was the second-leading cause of death for those ages 10-14 in Texas. According to the Montgomery County Sheriff’s Office, there were three confirmed suicides by residents younger than 17 and 15 suicides by residents younger than 25 in 2018 locally.

“Suicide, in our nation, is a silent epidemic,” Mack said. “I believe there are 150 or 160 counties in Texas that don’t even have a psychiatrist.”

Conroe ISD partnered with Tri-County Behavioral Healthcare last July to launch a mental health pilot program at Armstrong Elementary and Grangerland Intermediate as one way to address the increasing needs of youth. School-based threats of violence—from mass shootings to bomb threats seen nationwide that often stem from mental health needs—rose 61.3% from the 2016-17 to the 2017-18 school year, according to CISD officials.

Evan Roberson, executive director of Tri-County Behavioral Healthcare, said its number of patients in need of crisis services has increased over the past three years, with last year showing a growth of nearly 20% and this year anticipated to be the same.

“In the first four months of the year, we had already utilized half of our total funding—usually, the first four months are our slower months,” Roberson said. “We’re concerned about the pace we’re on for folks showing up in crisis. A lot of those people are suicidal … but we’re seeing an increase in persons seeking crisis mental health care across our service area.”

She said population growth may contribute to the rise in suicides and mental health issues as well: Montgomery County saw a 36.1% population increase from 2007-17.

“I’ve lived in this area almost 20 years now, and there’s been a huge migration,” she said. “With that comes more people and more exposure to different life experiences.”

Part of the battle is raising awareness, Mack said. He formed a community task force to continue facing the issue head-on. The task force will meet for the first time May 16 at the Lone Star Convention Center in Conroe, which Mack said will be promoted through social and traditional media.

“Any understanding and education we can provide to our citizens about this issue, I think will be empowering,” Mack said.


Steps by the state

Although local resources are critical to supporting mental health and preventing suicides on the ground floor, the state of Texas is also working on bringing more studies, knowledge and resources to the topic.

The Senate budget proposal for the next biennium allocates $100 million in new funding for Senate Bill 10 in addition to SB 1, which allocates $7.5 billion across 21 state agencies to address mental health.

SB 10 would establish the Texas Child Access Through Telemedicine program, intended as a resource to connect at-risk students with behavioral health assessments and intervention programs via telemedicine.

“The state of Texas continues to take action on mental health with no greater examples of need than recent school violence examples,” Creighton said in a Feb. 13 press release. “After the hearings throughout the summer, the Committee [on School Violence and Safety] understood the urgency of identifying at-risk youth and getting them the help they need to fully rehabilitate. It’s one of the most important issues we have to address this session.”

SB 10 passed in the Senate on March 5, moved on to the House Committee on Public Health on March 28 and is awaiting an upcoming House vote as of press time.