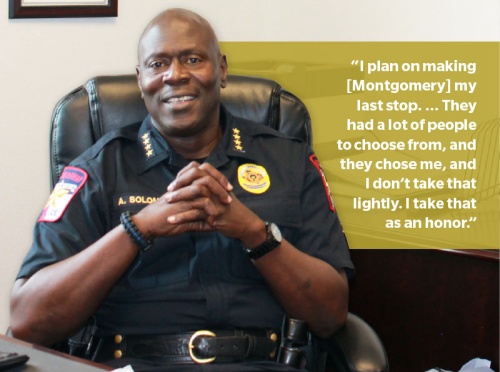 The city of Montgomery’s new police chief, Anthony Solomon, has only been at his job since April after replacing Jim Napolitano who retired in January, but said he is already impressed by the town.
“I plan on making this my last stop. I’ve had a really good career, and I am blessed to be here in this city,” Solomon said. “They had a lot of people to choose from, and they chose me, and I don’t take that lightly. I take that as an honor.”


What is your work experience?

Around 1984-85 I went to work for the Texas Department of Criminal Justice institutional division for about nine years. In 1993 I went to work in the Tomball Police Department as the [department’s] first African American police officer ever. I worked my way through the ranks. After 22 years, I was captain over special services. I retired in 2015, and I went to a city called Bellmead near Waco. I started out as their operations lieutenant [and] was promoted to assistant chief. I left there after a year and six months because I got the job as chief of police in the city of Prairie View ... for two and a half years, and now I’m here in Montgomery and loving every day of it.


What projects do you have planned?

First of all, what we’re looking at is our policies in the police department. We’re looking at programs that have never been here before ... because with the growth of the city, we need to start looking at crime-prevention programs.


What long-term goals do you have?

Our long-term goal is to make this department one of the best in Montgomery County, to grow and become as proficient officers as we can, to make sure our officers are as well-trained as any officer out on the street. Our goal is to be the police of this city, to make sure our citizens are safe and that we have programs that will help the city.


How are you fitting into your new role as chief so far?

I think the relationship is building very well. You have to come in and listen to what the officers are saying. You’re never going to change what everyone wants you to change. I do think the biggest success so far is they know it’s an inclusive department. Here’s the deal: If I’m the smartest guy in the room, we got some issues. I need to know you have some ideas.


What should Montgomery citizens know about you?

I’ve always done this job with integrity. I understand that the most important thing about doing this job is the citizens of this town. What they need to know is that I’m willing to answer any questions. There is nothing that we do that should [not] be able to stand up in the light of day, and that’s kind of how I do my business.
SHARE THIS STORY