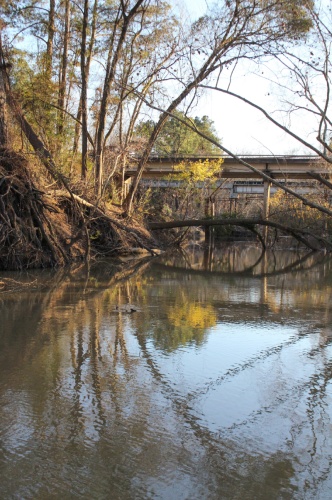 Hurricane Harvey delivered torrential rain to Southeast Texas in late August, causing millions of dollars in damage, displacing hundreds of Montgomery County families and shutting the doors of many businesses.

Prior to Harvey, Montgomery County residents experienced two major flooding events in two consecutive years: the April 2016 Tax Day and May 2015 Memorial Day floods. Local, state and federal officials intend for flood mitigation to be a priority in 2018.

“Our community has seen three 500-year floods in the last three years alone,” Brady said. “We can either address this issue now, or face the consequences for years to come.”

The SJRA and Montgomery County officials met with Harris County and the Harris County Flood Control District before Christmas to collaborate on the project’s second phase and a flood mitigation study, Houston said. HCFCD requested to lead the project, and officials are preparing a grant application for the Texas Water Development Board, Houston said.

The $1.25 million study could begin as early as the second quarter of 2018, Hess said. The proposal identified White Oak Creek, Bear Branch and the West Fork San Jacinto River as some of the tributaries to be analyzed, and officials estimate associated flood mitigation projects could cost $95.5 million.

“This study is crucial to not only current emergency response and notification procedures but will pave the way for future mitigation,” Hess said.

However, federal funding is in high demand, as the nation addresses several major natural disasters that crippled the U.S. in 2017: three hurricanes and a series of wildfires.

The U.S. House approved House Resolution 4667 on Dec. 21, which proposes $81 billion in supplemental disaster appropriations for those regions. If the bill was not signed by President Donald Trump by Jan. 19, lawmakers will have to enact a stopgap spending bill to avert a government shutdown.

“I believe this is going to be one of the largest [disaster relief resolutions] that the country has seen,” Brady’s legislative assistant Dylan MacInerney said.

In Texas, state lawmakers have yet to tap into the Economic Stabilization Fund—or Rainy Day Fund—for flood mitigation projects. According to the Texas Comptroller’s Office, the state has the nation’s largest ESF at nearly $10 billion.

“We think that the impact on the state side of the expenditures will be around $2 billion total, and we will have to ... weigh the available cash with the total expense needed and look to the Rainy Day Fund for the rest,” Creighton said.

Harvey dropped 27 inches of rainfall in Montgomery County, according to the Community Collaborative Rain, Hail & Snow Network. The rainfall caused Lake Conroe’s water levels to rise from 201 feet to 206.24 feet above sea level—207 feet above sea level is the state-mandated limit.

To avoid a breeching of the dam, which stands at 212 feet, the SJRA released enough water to fill the lake with 15 feet of water at a record-breaking rate of 79,100 cubic feet per second, SJRA General Manager Jace Houston said.

The Lake Houston area was also affected by flooding, with some officials saying they believe SJRA water releases exacerbated flooding. Citing information from the HCFCD, Houston said only 10-15 percent of floodwaters in the Lake Houston area originated in Lake Conroe.

The campaign calls for state funding to study and dredge the San Jacinto River, and for the state to reduce the amount of water in Lake Conroe by 3 feet.

“What we’re asking Gov. [Greg Abbott] to do is to give us a little bit of capacity,” Martin said. “So, governor, please take us immediately down from 201 [feet] to [198] feet in a slow systematic release of water so that we don’t impact people downstream from [the] Lake Conroe dam.”

Houston said he believes lowering lake levels could affect property values around Lake Conroe, and 3 feet of capacity may not make a significant difference during large rain events. Community organizations like the Lake Conroe Communities Network also oppose the proposal because of concerns about its economic effects on property values and recreational revenue.

This story is one update from The January Issue. View the full list of the Top 10 stories to follow in 2018 here https://impactne.ws/cin/302369