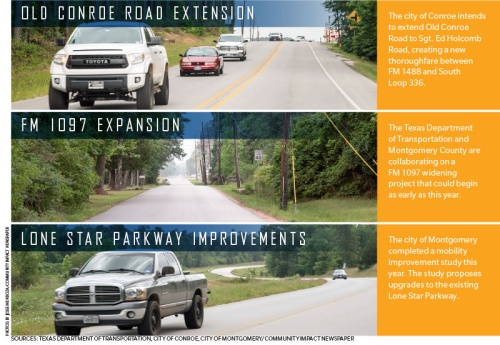 Local stakeholders are working to expand major thoroughfares and enhance interconnectivity within the Lake Conroe region’s roadways with the goal of reducing traffic congestion.

The Houston-Galveston Area Council and the Texas Department of Transportation are moving forward with regional transportation planning and improvement initiatives that could provide transportation funding and partnership opportunities, of which local municipalities hope to benefit.

The city of Conroe is preparing its pitch for funding from H-GAC’s Transportation Improvement Program, which is a blueprint for transportation projects seeking federal funding over the next four years. The city seeks funding for four transportation projects that would enhance interconnectivity between state highways, such as Loop 336, Hwy. 105 and FM 1314, many of which are slated to receive upgrades themselves from TxDOT in the coming years.

Meanwhile, the city of Montgomery completed a transportation study in January, which includes plans for upgrades to the existing Lone Star Parkway and construction of a southern loop around the south side of the city.

TxDOT is preparing for transportation improvement projects on several of the area’s most traveled highways. The expansion of FM 1097 from two to four lanes between I-45 and Lake Conroe will address traffic congestion from development in northwest Conroe. The project will go out for bids in June, officials said. Other projects, such as expansions of Hwy. 242, Hwy. 105 and FM 1314, will improve interconnectivity between I-45 and I-59, Galland said. The projects will be sent to bid in 2019, 2023 and 2025, respectively.
Montgomery County Precinct 1 Commissioner Mike Meador said the FM 1097 project has been in the works for more than a decade and is necessary to accommodate developments like The Woodlands Hills, a 2,000-acre master-planned community.

Precinct 1 contributed about $8 million in 2015 road bond funds to pay for the right of way and design for the first phase of the project, which spans from I-45 to Anderson Lane.

“Even without The Woodlands Hills, FM 1097 will back up for 2 miles,” Meador said. “It is overloaded. That intersection there is one of the worst.” TxDOT is planning similar expansions on Hwy. 105 between downtown Conroe and Hwy. 59 in fiscal year 2025-26, and another between downtown Montgomery and the Grimes County line in FY 2023-24. The agency also plans to widen FM 1314 to four lanes north of Hwy. 242—which will also be expanded between FM 1314 and Hwy. 59.

While the projects will alleviate traffic on the outskirts of each city, another TxDOT initiative is planned to break ground in this summer to widen FM 2854 with two projects between I-45 in Conroe and Hwy. 105 near Montgomery to alleviate traffic congestion between the two cities, Galland said.

About every five years, the H-GAC updates its long-term Regional Transportation Plan. The agency has started the process of updating the plan through the year 2045 by hosting public meetings at select locations throughout the Greater Houston area, including one held in Conroe on April 4.

While the cost of potential projects has not been studied for the 2045 plan, the 2040 plan proposed about $88 billion for projects throughout H-GAC’s region, which includes Montgomery, Harris, Fort Bend and 10 other counties.

In addition to the long-term plan, which is expected to be completed by the end of the year, H-GAC is preparing to make a call for applications this summer for its Transportation Improvement Program. Through the TIP, local municipalities provide plans for projects that could receive federal funds.
The city of Conroe is preparing to apply for TIP funding for four projects: extensions of FM 1314 and Old Conroe Road, and widenings of FM 830 and Foster Drive, Conroe Director of Transportation Tommy Woolley said.

“All these projects are dependent on whether we get federal funds or not,” Woolley said. “Then the council will decide whether they want to move forward or not and in what year.”

Woolley said the projects will move traffic between major state corridors within the community. The FM 1314 extension, for example, gives commercial traffic and 18-wheelers from Hwy. 59 better access to the Conroe Park North industrial park. If funded, the project would extend the roadway from Hwy. 105 to Loop 336 North.

H-GAC funding has helped Conroe fund other road projects recently. The H-GAC has already approved TIP funding for a project to widen Old Conroe Road from two to four lanes and extend it to connect to Sgt. Ed Holcomb Road—creating a direct route between FM 1488 and Loop 336 South.

During the upcoming call for TIP projects, Woolley said the city will apply for additional funding to cover a part of the cost of acquiring the right of way needed for the project.

“Traffic on FM 1488 is terrible,” Woolley said. “This gives residents a second option to get to the south of Conroe from FM 1488.”

The city of Montgomery is making plans of its own to manage traffic along the area’s main thoroughfares, which tend to receive heavy congestion during morning and afternoon commute hours, particularly near local schools, City Administrator Jack Yates said.

Yates said initiatives include upgrading the existing Lone Star Parkway to state standards—making it either a wider two-lane road or a four-lane road.

The city intends to apply for H-GAC funding for the project during a future call for TIP projects, Yates said. If the roadway is upgraded, it could be turned over to the state for maintenance and could serve as a mandatory bypass for 18-wheelers that frequently cross through town on Hwy. 105. “We have something like 2,000 semitrucks per day going down [Hwy.] 105,” Yates said.

The study also outlined plans to build a south loop for Lone Star Parkway that would allow commuters to bypass growing traffic on Hwy. 105. There is no timeline for the project, but Yates said it would likely move forward as property along the road develops.

Galland said he believes building loops around cities is an effective way to mitigate traffic, particularly within areas with many historic buildings like downtown Montgomery. “A lot of times downtown areas are constricted,” Galland said. “So if we would come through and make the road as wide as it needs to be, we would have to buy and tear down some of those buildings.”

“Traffic has increased substantially,” Yates said. “If we work on FM 149, then we will also be able to improve the flow of traffic on the intersection with Hwy. 105. One situation helps the other.”
SHARE THIS STORY