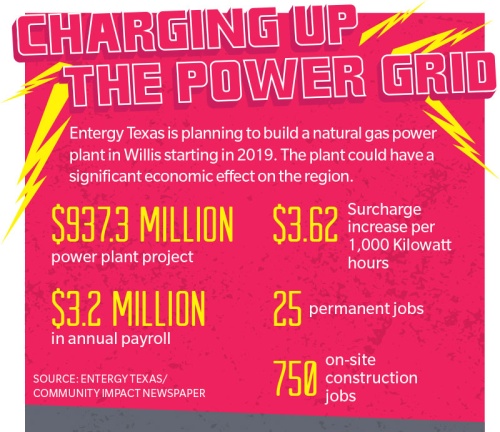 A new power plant and electrical infrastructure is expected to address projected growth and aid with economic development initiatives throughout the Lake Conroe area and Gulf Coast region starting in 2021.

Entergy Texas, which provides electrical service to a significant portion of the Lake Conroe region, is building a $937 million power station on the north side of the Lewis Creek Reservoir in Willis, said Steve Pilgrim, Entergy Texas director of business and economic development.

“Conroe is one of the fastest-growing cities in the United States, and you also know about growth in Montgomery County,” Pilgrim said. “You also look at the Gulf Coast, and you see the industrial growth that is going on down there too.”

By 2022, the Lake Conroe area is projected to boast about 185,000 residents—an increase from about 167,000 residents in 2017, according to an economic and development forecast compiled by Community Development Strategies, a Houston-based professional market and economic research company. Montgomery County is expected to reach a population of about 627,000 residents by 2021, according to Entergy Texas.

“It is very important that we are injecting new reliable and efficient generation sources into the grid,” Pilgrim said. “When you consider projects like this, we really can’t wait until it is absolutely needed. We have to plan in relatively long cycles.”

Entergy Texas will start construction on the 993-megawatt power station at the Lewis Creek location next year, and it is expected to be operational by 2021. Entergy Texas officials said they estimate the project could save Entergy Texas customers in the area $1.7 billion over the course of 30 years.

Although the power station will be funded through customer user fees, Entergy Texas spokesperson Andrew Schonert said the $937 million project will reduce the cost of electricity for customers because of added efficiency of producing electricity with newer technology. The plant is also expected to produce about 40 percent less carbon dioxide emissions.

“This is a new, very efficient power plant that will provide reliable energy at a much lower cost than older technology,” Schonert said. “It is also cleaner from the environmental perspective.”

Schonert said the company will fund the project through a combination of debt and equity, but it will recover the cost over the life of the plant from customer surcharges. The plant’s construction will lead to an approximate increase of $3.62 per month for Entergy Texas customers starting in 2021, he said.

Entergy Texas is also investing in a power grid expansion. Located within the Western Region Economic Project transmission line between the Willis and Huntsville areas, the project will alleviate congestion within existing power lines throughout the region.

The company is seeking approval from the Public Utility Commission of Texas for a possible route along I-45 or Rogers Road from the power plant location in Willis to an undetermined location in north Huntsville. The final route and ending location will be determined by the PUC, Schonert said.

“As our area grows, the line will help move lower-cost power across our transmission system,” he said. “You can think of it similar to the highway system—by adding another highway we help take pressure off existing roads and allow for a more efficient system. Once the line is in service, it will be interconnected to the broader [electrical]transmission system.”

Economic development
The station could have a significant economic effect in the region and create 750 construction jobs throughout construction of the plant and 25 permanent jobs to staff it, according to an economic impact study prepared by TXP Inc. on behalf of Entergy Texas.

Danielle Scheiner, director of the Greater Conroe Economic Development Council, said electrical service can be easy to overlook on a daily basis, but sufficient electrical service is an early and important consideration that prospective businesses and developments evaluate before undertaking new projects.

“I don’t think you can overstate how important electricity is,” Scheiner said. “Us not having the correct infrastructure in place to serve the projects would pretty much shut us down from being able to attract those projects. I think you don’t think about it until you flip that switch and the light doesn’t come on. Then it’s the most important thing in the world.”

Manufacturing and industrial companies in the Conroe Park North industrial park are significant users of electricity, Scheiner said. The city of Conroe is planning to expand the park pending final approval by Conroe City Council early this year, and the expansion could need additional infrastructure to attract new businesses, she said.

Recent developments in the Conroe region—such as the Grand Central Park development on Loop 336 and construction of Houston Methodist Hospital in south Conroe—required the assistance of local utility providers to implement the necessary infrastructure.

The 2,000-acre Grand Central Park, for example, was built on a former Boy Scout camp, and required installation of additional electrical infrastructure from Entergy Texas to sustain planned retail and residential portions of the development, Scheiner said.

“They had to do some additional service improvements in those areas, especially at Grand Central Park,” she said. “It was a Boy Scout camp with very little electrical use. So to get it set up so they could accommodate what [Johnson Development] planned was a pretty big capital investment.”

Schonert said in some cases, new commercial or industrial customers will fund the necessary upgrades to establish electrical service at their location.Early collaboration with utility providers also helps developers plan for development around the utility routes, said Virgil Yoakum, senior vice president of north development for Johnson Development Corp, which is the developer of GCP. He said cooperation with utility providers allows development teams to take utility lines into consideration when planning for infrastructure, such as roads, intersections and trail systems to avoid possible conflicts.

Pilgrim said Entergy Texas also undertook similar projects to accommodate hospitals on Hwy. 242 and I-45 like Houston Methodist The Woodlands Hospital, which opened in 2017. “You look at all the health care growth on I-45. We got involved very early in that build-out,” Pilgrim said. “We built substantial new substations and transmission and distribution assets and structures to bring to those new hospitals. It really takes a strong collaborative effort.”