‘We’re kind of like the little engine that could': Historical marker celebrates 65 years of Conroe Service League

The Montgomery County Historical Commission unveiled a marker Oct. 14 commemorating the Conroe Service League for 65 years of service in the community, the first time an organization in the county has been honored with a historical marker, commission Chair Larry Foerster said.

The league was founded by 12 women in 1955 and has since grown to 40-plus members each year, said Nicola Weems, publicity chair and former vice president of the league. In that time, the Conroe Service League helped to distribute the oral polio vaccine in 1962; opened the Bargain Box Resale Shop, a resale store in downtown Conroe, in 1957; sought to provide arts experiences for schoolchildren in Conroe; and helped with free hearing screenings at local preschools, according to the league’s application for the historical marker.

Weems said the league has been working since May on applying for a historical marker.

In its first 40 years, the league members were one of the initial volunteer groups to serve at the Montgomery County Hospital, which later relocated and became HCA Houston Healthcare Conroe. According to history compiled by its members, the league also contributed a neonatal intensive care unit to the local hospital, a "baby bird" respirator needed during the polio epidemic and a hospital chapel and launched a Baby Bundles program providing newborn supplies to new mothers, among other contributions.
RELATED STORIES

“When polio was rampant and then the oral vaccine came out, there was a committee of medical advisers that got together, and they had two weekends to distribute the oral vaccine. They came to the service league to help them organize and set up a vaccine [site],” Weems said. “There’s quotes [from news articles] that we put in the application that said they never would have gotten that done if it hadn’t been for the Conroe Service League.”

The league has also focused on expanding cultural arts and educational opportunities for Conroe-area students, Weems said. For example, the league chaperoned sixth-grade students to the Museum of Fine Arts in Houston from the 1958-59 school year until 2007, when it was no longer feasible, according to the historical application. Additionally, the league’s members were known as “picture ladies,” visiting local schools with famous works of art, classic films and organizing visits with fine arts groups in the public schools, the application reads.

“We were very active in wanting to bring art and culture and literature to elementary- and school-age children of Montgomery County,” Weems said.

When the state began requiring auditory and visual testing, league members took on screening preschool students for vision and hearing deficiencies in the 1970s at no cost to the families, according to league history. The Conroe Noon Lions Club now does the vision component.

In addition to community service, the league also helped open the Montgomery County Heritage Museum in 1986 and offers a college scholarship program, which began in 1961, according to the league. More than $200,000 was awarded to 178 local high school seniors from 1961-2001. 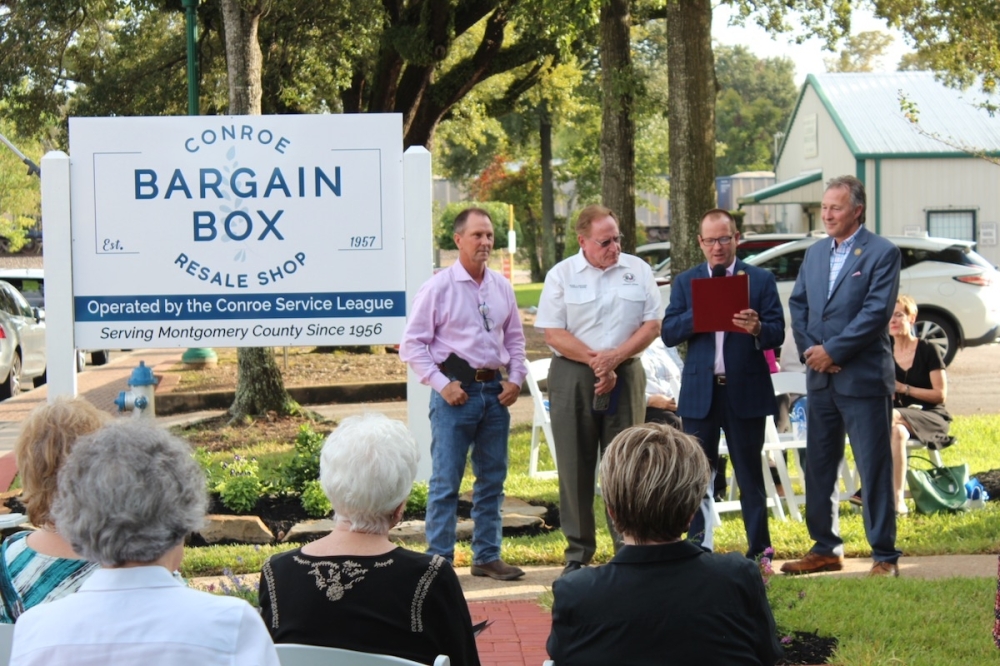 “The Conroe Service League is dedicated to providing organized service opportunities for the women serving Montgomery County in the areas of education, cultural arts, health and welfare. Their commitment transforms lives and strengthens our community in numerous ways, such as educational opportunities that forever may impact someone’s future,” Conroe Mayor Jody Czajkoski said in a proclamation Oct. 14.

To commemorate six decades of service and honor the founding 12 members—only one of whom is still living—the historical marker now stands in front of the Bargain Box Resale Shop, the oldest resale shop in the county, Weems said. Funds from the resale shop, which is staffed by league members, go to support the league’s charitable efforts, Weems said. The league has its largest fundraiser of the year—designer purse bingo—set for Jan. 25.

9 holiday light displays to see in the Greater Houston area

Montgomery City Council approved a comprehensive downtown master plan Nov. 9 to improve parking, pedestrian experiences and streetscapes. The plan includes a variety of projects up to 10 years out, totaling more than $12.25 million.