Across the Santa Fe railroad tracks in southeast Conroe lie the once-bustling Dugan and Madeley Quarter neighborhoods, the oldest Black communities in Conroe. According to the city, many of the plots can be traced back to original settlements of freed persons.

Gwen Holmes, supervisor in the Montgomery County Sheriff’s Office Warrants and Records Division, said she was born in the old hospital on Avenue G. Even amid segregation, she said, she enjoyed growing up in Dugan.

“Dugan was wonderful,” said Holmes, who now lives in another neighborhood. “We had so much fun.”

Years later, the sense of community fell apart; and Dugan saw an influx of drugs in the 1980s, she said. Crime worsened, said Alice Smith, a Black resident of the area.

In 1998, the city of Conroe identified the Dugan and Madeley neighborhoods as areas that had been neglected and underserved for years, and it established a housing rehabilitation and reconstruction program. Since then, the city has built 74 homes using federal Community Development Block Grant funds, Conroe Director of Community Development Nancy Mikeska said.

Still, more work needs to be done, according to residents. Many homes stand in disarray, and there is a lack of infrastructure, economic development and Black-owned businesses. According to city documents, Dugan and Madeley are home to the city’s highest minority population and the worst housing stock. 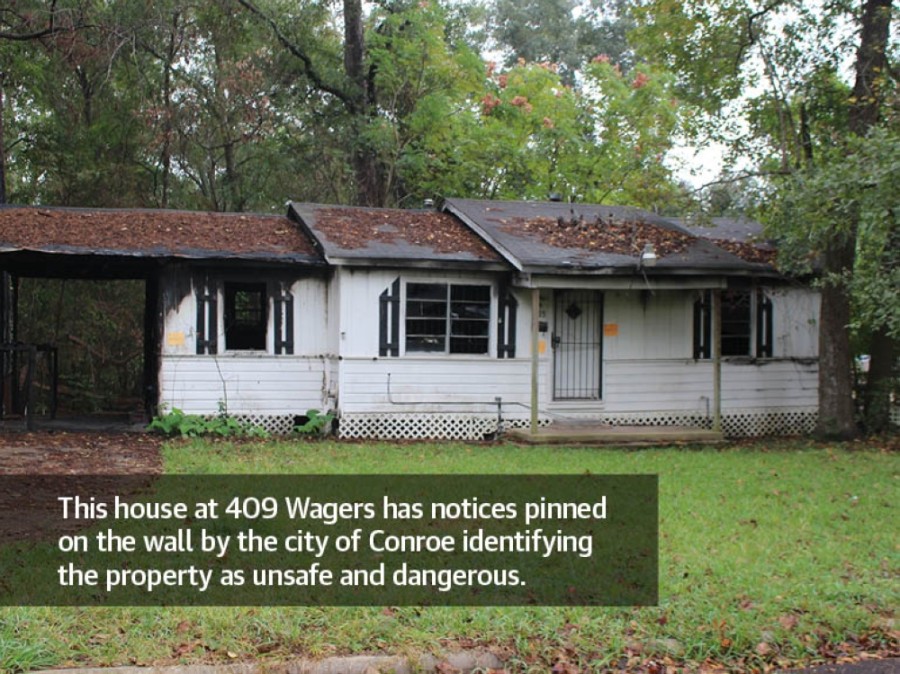 “There’s old houses that need to be torn down,” Holmes said. “We still don’t have streetlights; we don’t have speed bumps; we don’t even have sidewalks.”

Since 1900, most Black residences in Conroe have been clustered in the southeastern edge of the city where Dugan and Madeley are located, according to the Texas State Historical Association.

The first classes for Black students in Montgomery County were held in the Central Baptist Church in Madeley Quarter. The first Black school in Conroe ISD was built in 1919 on First Street in Dugan; it later became Booker T. Washington High School. CISD was integrated in 1968.

The Conroe Normal and Industrial College, an all-Black college built in 1903 in Madeley, struggled to survive the Great Depression in the 1920s and '30s. It saw its enrollment plummet in the 1980s and eventually ceased classes, according to the historical association. It currently sits empty on 10th Street.

Carl White, who ran for Conroe City Council Position 2 this November, said he remembers when Dugan brimmed with stores, clubs and people walking on the streets. White has fond memories; he used to DJ at the clubs and get his hair cut at a barbershop in Dugan. 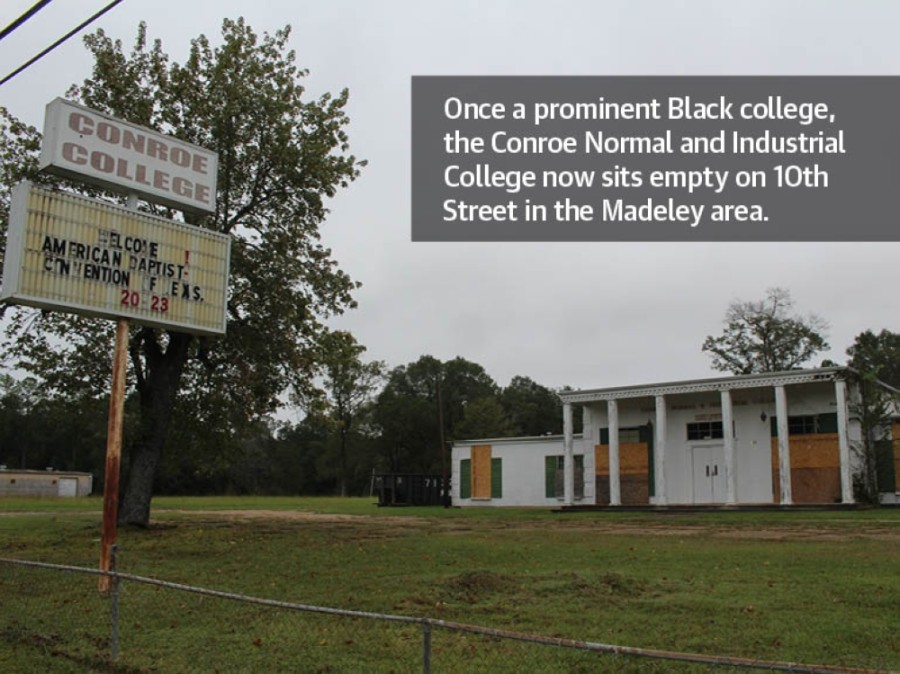 One Black business owner, Patrick Stuart, who died this year, was particularly pivotal to the community, White said. Stuart founded the Martin Luther King Center, a store and food pantry, at what is now True Fellowship Bible Church. Prior to that, the store was known as "Cleveland's" and was owned by Bubba Cleveland, a Black man.

“Dugan was where everything was going on,” White said. “Then, all of a sudden, it just disappeared. ... The community is gone; all the stores are gone; all the clubs are gone; everything that was bringing economic [growth] to the area is just gone.”

At present, the primary business makeup of the area is hair salons, laundromats and food marts. Madeley Quarter is also home to some businesses, such as hand-wash car washes. 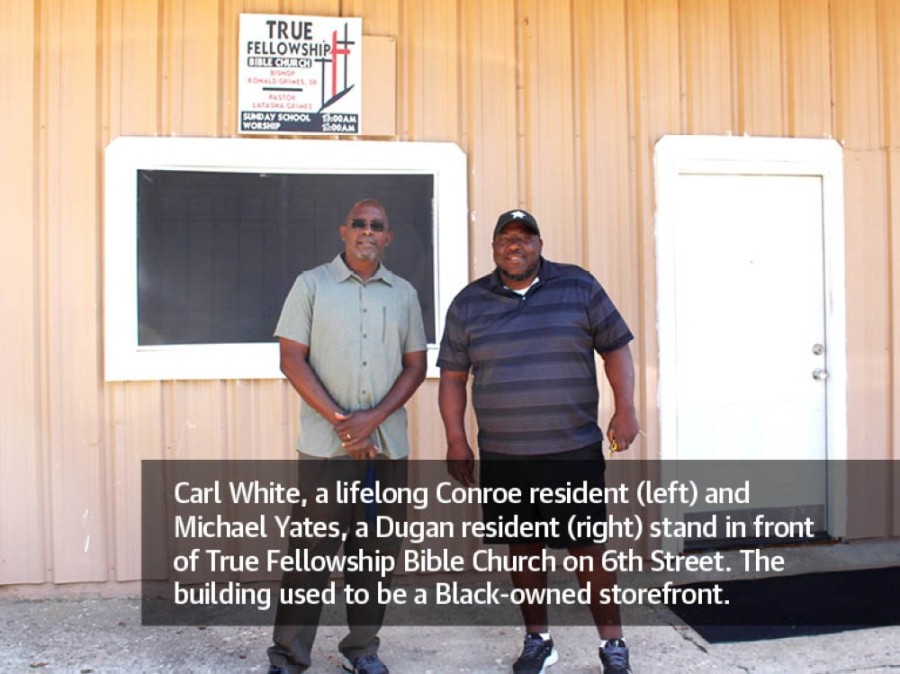 According to estimates from the U.S. Census Bureau’s American Community Survey, the census tract that includes Dugan and an are to the east of it had a median annual household income of $38,603 in 2018, as compared to Conroe’s $53,943. The area has also become more diverse as an influx of white and Hispanic residents have moved in; in 2010, Black residents represented 20.9% of the population, but by 2018, that number had fallen to 15.6%.

White said he believes several factors could have contributed to the area’s general decline: For one, low-income areas tend to fall behind as cities grow, and the younger generation may not have kept up their parents’ properties. The lack of businesses has further stifled economic growth, he said.

“The community is dying because they have no resources coming,” he said. 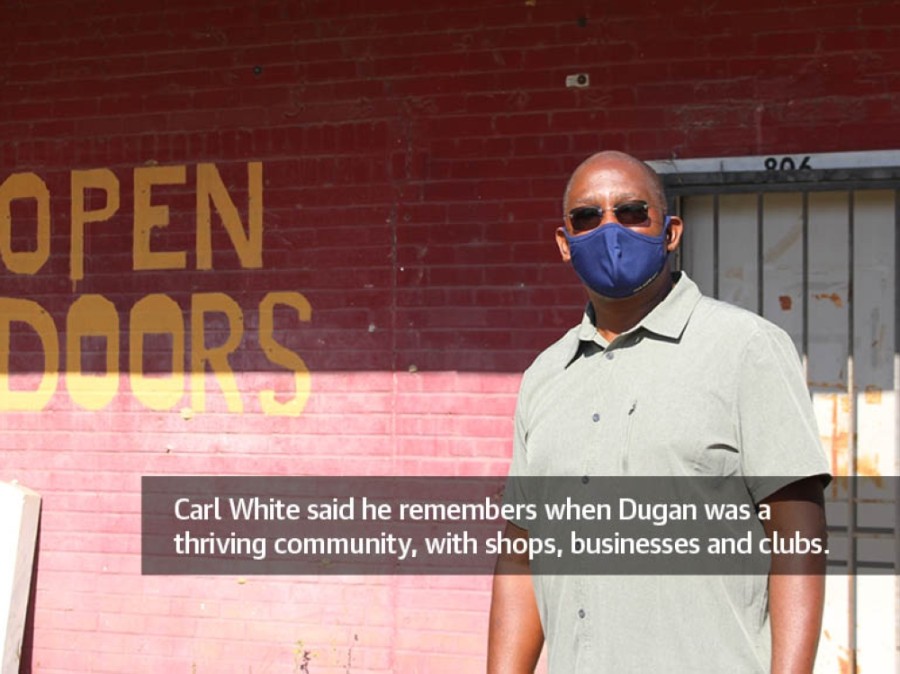 Holmes said she has pleasant and painful memories of growing up in Dugan. When she would walk downtown, segregation became more apparent. She remembered going to the doctor, seeing one door labeled “Whites” and another labeled “Colored.”

Dugan was a thriving Black community then, she said.

The city allocated $355,283 in CDBG funds from 2015-19 to help the neighborhoods in two areas: housing rehabilitation and annual neighborhood cleanups. No city tax dollars were used, Mikeska said.

Smith, who is on the advisory committee, said she grew up in a two-bedroom home in Dugan that did not have sewers or running water. In 2005, the city rebuilt her house on Avenue I with a brick foundation.

Smith said that help is available but many residents do not advocate for themselves.

“If you don’t tell them there’s a leak on city property, they ain’t going to come out and do nothing for you,” she said. “When I ask for help, I get it.”

However, Mikeska said, the city’s housing program has its limitations: It has limited CDBG funds, and properties the city demolishes must have a property owner. 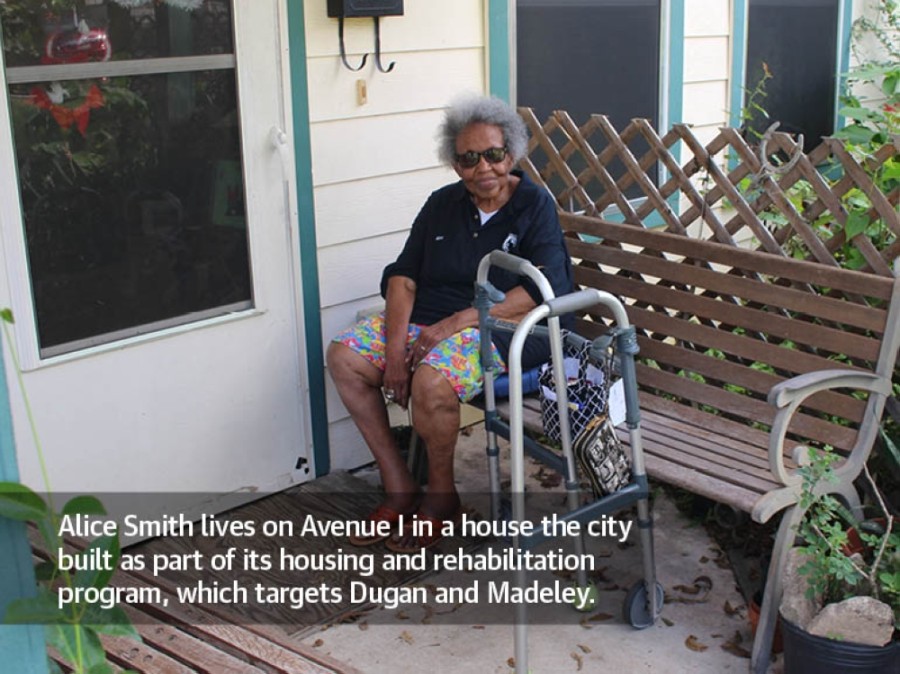 “Many times, in historic neighborhoods, the property is passed from generation to generation without probating a will or granting a deed,” she said. “It can take a really long time to sort out the legal ownership.”

Still, some residents said they believe the city should invest in more economic sustainability for the community.

“They built houses. That’s great,” White said. “But that’s money that can also be used to improve the infrastructure, put in the sidewalks, ... to help with business development.”

In 2005, the Conroe Police Department identified the predominately Black southeast quadrant of Conroe, where Dugan is located, as an area of high crime, drug use and prostitution. The department launched a drug initiative in 2006 that included an increase in police presence in the neighborhood.

“They used to call this 'drug headquarters,'” Smith said. “You could see policemen down here 24/7.” 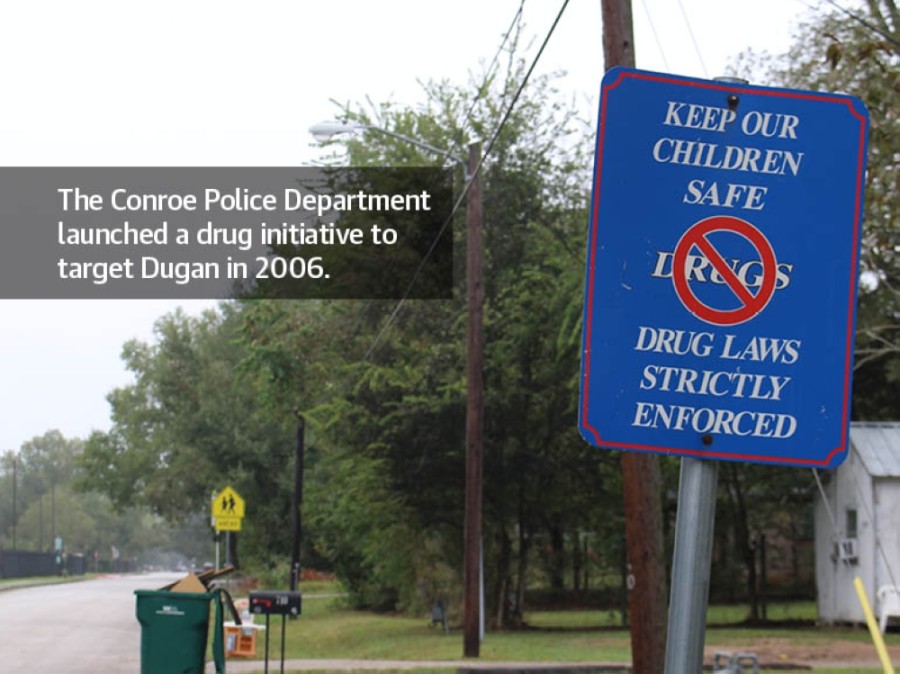 The initiative lasted several years, and from 2005-06, the department saw a 72% increase in narcotics tips received, a 78% increase in felony arrests and a 96% increase in misdemeanor arrests, according to the police department. However, more recent statistics were not readily available.

LaDon Johnson, a Black man who founded the Good Brothers and Sisters of Montgomery County, a nonprofit that aims to unite the Black community, said he knows firsthand what growing up in poverty in Dugan is like. He said he slept in his dad’s car as a child before his family moved into the Salvation Army on Avenue E.

Now, Johnson is trying to get the Black community to take action. The nonprofit is creating a mentorship program for youth. Members went door to door in Dugan before the Nov. 3 election to register residents to vote.

At the city level, Jody Czajkoski, who was elected mayor Nov. 3, has said that business and educational opportunities are critical for the Dugan and Madeley areas. He invited the University of St. Thomas to Conroe, which opened within walking distance of Dugan and Madeley in October, and is proposing a business incubator downtown. Czajkoski said he believes better infrastructure is also needed to connect downtown with Conroe’s lower east side.

“We really need to do some work on sidewalks over there,” Czajkoski said. “Providing the education and the workforce and the jobs will really help redefine the area in the next four or five years.”