It is not clear if Montgomery County businesses were surveyed. (Community Impact Newspaper)

COVID-19 vaccinations have been optional but largely encouraged by health care professionals since the first doses rolled out in Texas in December. As of press time June 15, 41% of Montgomery County’s eligible population had been vaccinated.

But with vaccines available to all population groups over the age of 12, some employers across the nation are beginning to mandate the vaccine. Legally, private businesses can require employees to be vaccinated, although they must provide exceptions such as for religious beliefs, said Valerie Koch, co-director and assistant professor at the Health Law and Policy Institute at the University of Houston Law Center.

On March 31, Houston Methodist became the first major health care system in the nation to require its employees to be vaccinated for COVID-19, and CEO and President Marc Boom said he believes others will soon follow suit. The hospital system has four clinics in Conroe and one in Montgomery.

“Now CEOs of other health care institutions are calling nearly every day to ask how we are doing it,” Boom said in an email addressed to employees in April. “I have spoken to countless hospital leaders across the country who plan to mandate COVID-19 vaccination soon.”

While no other Houston-area health care system had announced vaccination requirements before press time, Baylor College of Medicine—which has a medical center in Conroe—said a COVID-19 vaccine requirement is likely to be implemented this fall for employees.

Outside of hospitals, cruise lines such as Royal Caribbean International, which offers cruises from Galveston, are requiring guests age 16 and older to be vaccinated against COVID-19. Delta Airlines, which operates out of George Bush Intercontinental Airport, is also requiring new hires to get the shot.

A survey conducted by PNC Financial Services, a bank holding company and financial services corporation, found more than 40% of the 150 small- to medium-sized businesses surveyed in the Greater Houston area plan to require it. It is not clear if the survey includes businesses in Montgomery County.

As of press time, conversations with city and local business officials in the Conroe and Montgomery area did not indicate vaccine mandates are occurring locally—except for a handful of assisted-living facilities.

“I think that most businesses—locally, statewide and nationally—are encouraging their employees to get vaccinated but are stopping short of requiring it,” said Danielle Scheiner, executive director for the Conroe Economic Development Council. “I don’t see it having a major impact locally.”

"We have a high number of folks that just have a conscientious objection to vaccines in this county,” he said. “In this county, it’s always going to be voluntary, never forced.”

Still, some experts predict there could be a domino effect with more businesses possibly mandating vaccines moving forward.

“I think more businesses over time will start mandating the COVID-19 vaccine, especially if it becomes more available,” Koch said.

Although officials said COVID-19 vaccination requirements will likely not be widespread in Montgomery County, area hospitals are beginning to require or consider requiring them.

Boom said the decision was reminiscent of when Houston Methodist became one of the first in the country to require the flu shot for its employees in 2009. 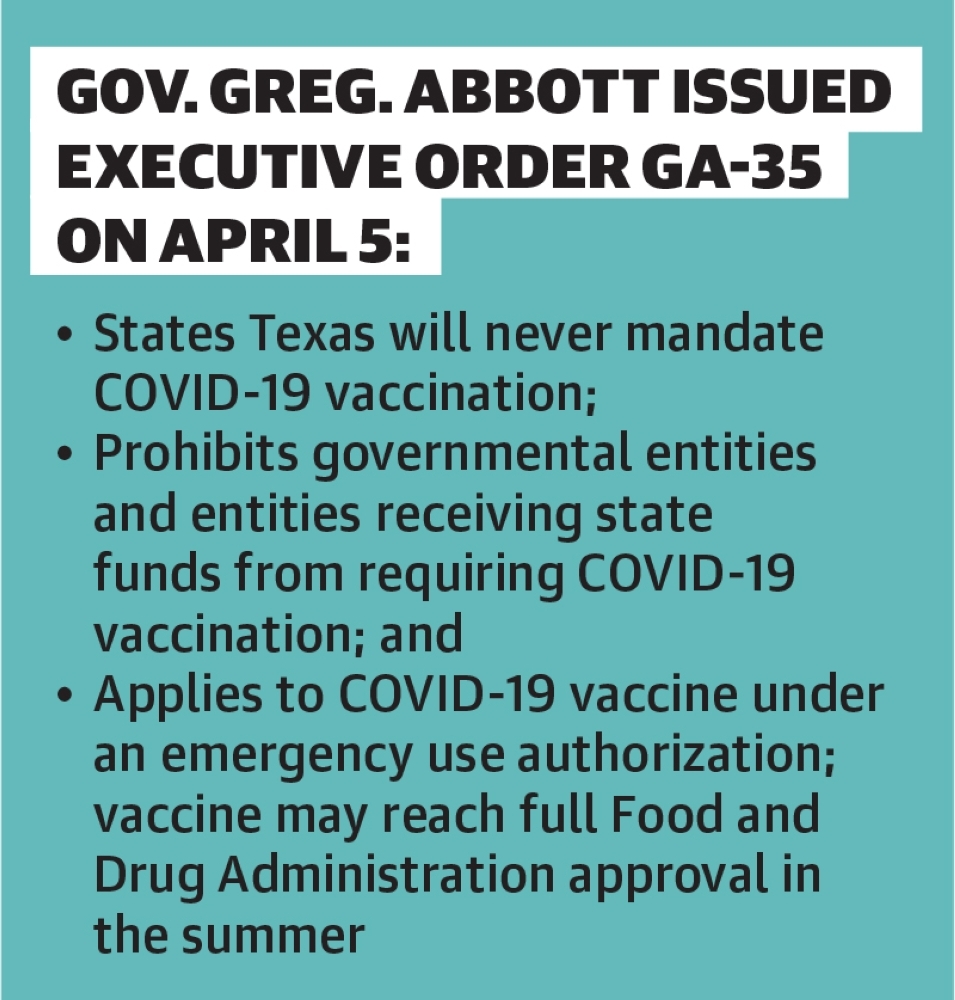 “We would never ask [our employees] to do anything that we thought was unsafe,” he said,

As of May 18, 98% of its employees had been vaccinated, enough to achieve herd immunity among staff, hospital officials said. Herd immunity is the level of vaccination needed to reach immunity in a population.

Boom said since Houston Methodist publicly announced its vaccine policy, it has been met with both support and pushback. According to Houston Methodist, 178 employees had not yet complied with the requirement as of early June. Also, 117 employees filed a lawsuit. The lawsuit, filed in Montgomery County, stated vaccines authorized under emergency use should not be mandated as a condition of employment.

Also serving the Greater Houston area, Baylor College of Medicine will likely mandate the COVID-19 vaccine to employees in the fall, said Dr. James McDeavitt, executive vice president and dean of clinical affairs. He said he anticipates this will be even more common in the health care sector once the vaccine receives full Food and Drug Administration approval, likely in the summer.

States, not the federal government, can mandate vaccinations when there is a public health need, Koch said. However, there must be certain exemptions such as for religious reasons, and vaccines cannot be forced.

“Somebody cannot be essentially held down and forced to receive a vaccine,” Koch said. “Rather, there must be a reasonable and proportionate fine, for example.”

On April 5, Abbott issued Executive Order GA-35, which states that Texas will never mandate COVID-19 vaccination—although this order specifies only vaccines under an emergency use authorization. It is not clear if the order would change under full FDA approval. The order also prohibits entities receiving state funds from requiring it.

Meanwhile, Montgomery County officials said they will not mandate vaccination.

“From the perspective of the general population, we’re never going to force any one of you to get a shot in your arm,” Millsaps said.

David Barron, a labor and employment attorney, said federal agencies recently relaxed guidance for businesses regarding vaccination etiquette. For example, Barron said the U.S. Department of Labor Occupational Safety and Health Administration updated its guidelines in mid-May to no longer require employers to record COVID-19 vaccine side effects until May 2022.

Barron said he believes many employers have at least considered implementing a vaccine requirement.

“If things continue to get better, I would say it’s probably unlikely that additional employers would jump onto the mandate bandwagon,” he said. “If things turn the other way, I think there’s a good chance you will see employers [mandate].”

Several assisted-living facilities in Conroe are requiring a COVID-19 vaccine for employees, according to property management websites.

Eclipse Senior Living, which manages Elmcroft of Rivershire Conroe, stated in an April 9 letter from CEO Kai Hsiao that it is asking associates in its communities to be fully vaccinated by June. Retirement Center Management, which manages Carriage Inn Conroe, includes participating in mandatory vaccine programs such as COVID-19 in its job descriptions. The property managers did not respond to requests for comment.

Meanwhile, Scheiner said most places in Conroe likely will not mandate.

“The rewards would really have to outweigh the risk,” she said. “I suspect that most will decide otherwise, especially since most of them have not experienced major outbreaks within their own facilities.”

Just outside of the Conroe and Montgomery area, Steve Hoffart, owner of Magnolia Pharmacy, said he has had several employers—from sectors that range from health care to real estate to sales—call him and ask for advice regarding vaccine mandates.

“I am a business owner; I am a health care provider; and I’m also a very freedom-loving American,” he said. “Wearing all three hats. ... I don’t think there’s an easy answer.”