An upcoming decision by the Texas Supreme Court could conclude 15 years of litigation involving Montgomery County and a company operating an injection well for nonhazardous waste disposal near the Conroe oil fields.

The case centers around whether permits for the injection wells were validly issued. The saga began in 2005 when a wastewater processing company called TexCom Gulf Disposal—now known as Union Processing Systems—purchased a 27-acre tract off FM 3083 in Conroe to build a surface facility and four injection wells.

Montgomery County and the city of Conroe filed a lawsuit, citing environmental and public safety concerns over the wells potentially contaminating the aquifers, or underground layer of water-bearing rock.

“This is not a location that is suitable for this underground injection,” said Art Wilson, a retired engineer with expertise in the pipeline industry who has protested against the wells since the beginning. “The danger is that injected waste can come up through an old abandoned oil well and [enter the aquifer].”

One injection well is in operation, and Union Processing Systems has permits to drill three more wells. But the company claims its operations are safe and well monitored.
RELATED STORIES

The end of the legal debate now lies with the Texas Supreme Court, which will likely make a decision in the first quarter of 2021.

If the court decides to hear the case, it could either uphold previous court rulings, meaning Union Processing Systems would be able to continue its operations, or reverse all or some rulings, which would send the case back to trial, Montgomery County Attorney B.D. Griffin said. If the Texas Supreme Court opts to not hear the case, the case will be dropped.

In 2005, Jennifer Real, a Conroe resident, received an invitation from resident Shirley Hogeland to a community meeting about injection wells coming near their homes. Jennifer Real’s mother-in-law, Linda Real, who grew up near a Dow Chemical Co. plant in Freeport, had died of complications from blood cancer. She recalled doctors asking Linda Real about any exposure to chemicals.

“We [had] found out a lot about chemicals in the body [because of my mother-in-law],” she said. “It all started clicking.” 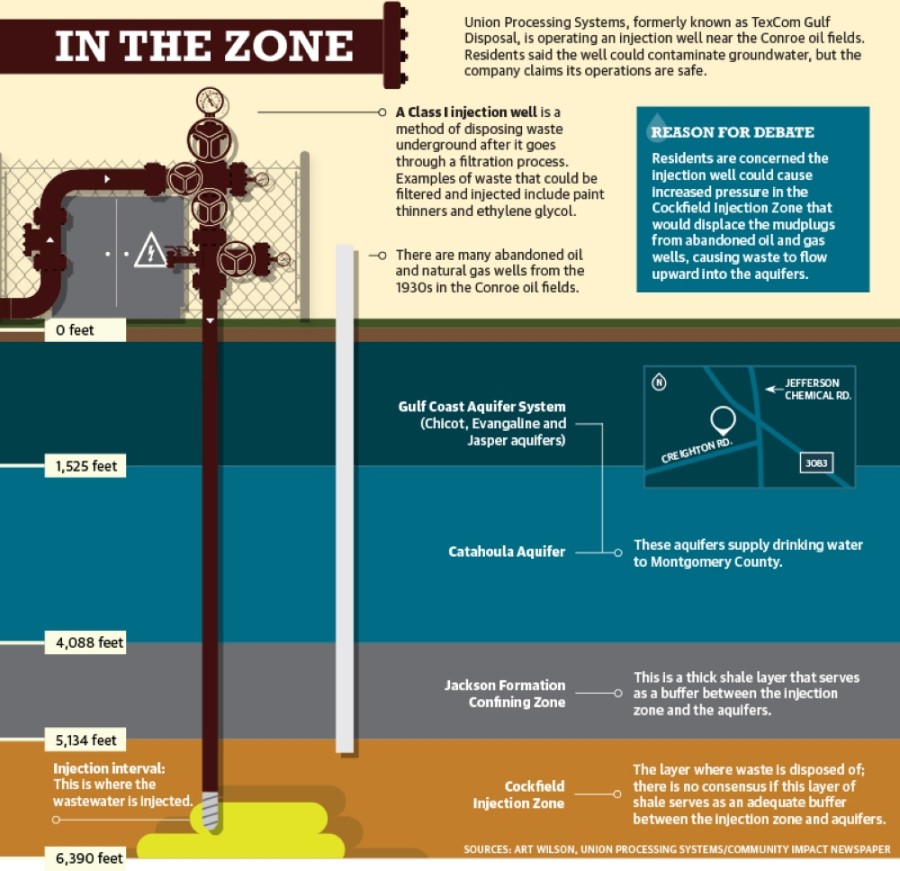 Residents took their concern to the city and county, and the entities filed objections to the permits issued by the Texas Commission on Environmental Quality. Hogeland helped form a nonprofit called Citizens Residents Oppose Wells, and Jennifer Real and several other women formed an organization called Stop the Toxic Wells to raise money for legal fees for a lawyer and to advocate for the nonprofit.

Residents allege because the well is in the Conroe oil fields, it could potentially contaminate the Gulf Coast Aquifer System—which includes the Chicot, Evangeline and Jasper aquifers—as well as the Catahoula Aquifer, Wilson said. There are about 9,000 residential wells that likely use the Gulf Coast Aquifer System, although not all of these may be used for potable use, according to the Lone Star Groundwater Conservation District.

“I am not opposed to underground injection of wastewater where you have the right location,” Wilson said. “But because of these abandoned [oil and gas] wells, I was concerned from the beginning.”

Examples of waste that could be disposed of in the injection wells are paint thinners and ethylene glycol-based antifreeze, according to Union Pacific Systems’ website.

Another problem is the geology, Wilson said. The Texas Administrative Code requires a nonpermeable zone plus an additional buffer between an aquifer and the injection zone. The Jackson Formation, which sits beneath the Catahoula Aquifer, is a shale formation that serves as an adequate buffer, Wilson said. But he said he believes the layer beneath that and the Cockfield Formation where waste is being injected is not an adequate layer because the sandy channels allow for fluid movement.

“TexCom’s argument was [that] it was adequate. ... But the shale is fractured,” he said.

According to the Environmental Protection Agency, injection wells can be a safe, inexpensive option for the disposal of unwanted industrial byproducts, and chemical companies have been injecting waste into deep wells since the 1950s. Class I wells—the kind Union Processing Systems has permits for—are typically drilled thousands of feet below the lowest underground source of drinking water. There are about 800 operational Class I wells in the U.S., according to the EPA. 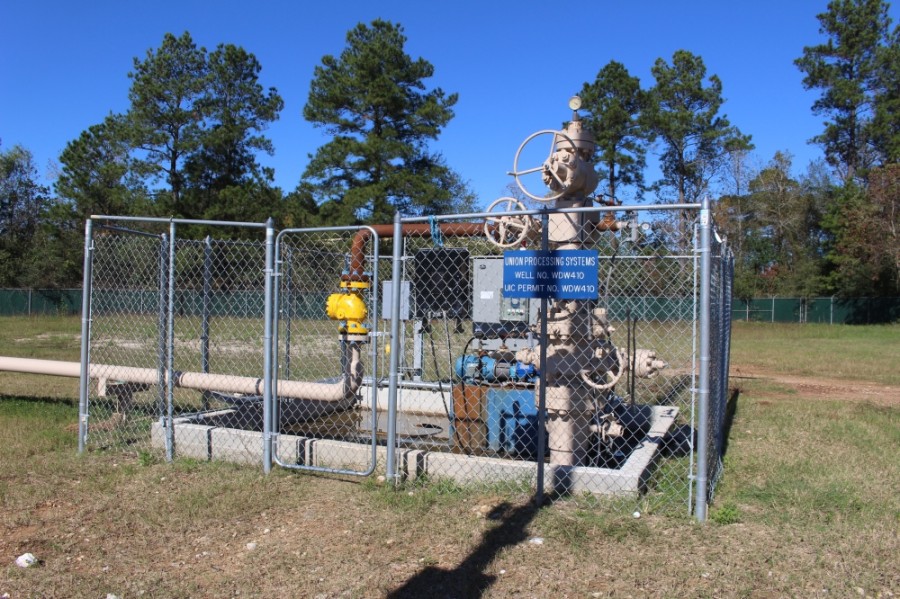 There are 249 various types of wells, such as wells associated with oil and gas production, in Montgomery County, according to the EPA’s database.

“We’re surrounded by other injection wells,” Willis said. “Our well is on average 2,000 to 3,000 feet deeper ... We have a lot of additional safety standards.”

Union Processing Systems uses an automated system that shows conditions such as pressure and water levels and continuously updates and records data every six seconds. If a leak were detected, operations would automatically shut down, Willis said.

When trucks arrive on-site, waste is first tested in a lab. It then goes through a treatment and filtration process at the surface facility before being injected to a depth of 6,372 feet.

Willis also said the Cockfield Formation acts as a complete barrier to any upward migration of injected fluid, and he believes the nearby oil and gas wells are not an issue.

“Engineering calculations show that, based on the distance from the UPS well, ... any pressure increase in the injection zone will not have an effect on those wells,” he said.

Although the company has permits for three more wells, Willis said he does not think more are needed.
SHARE THIS STORY