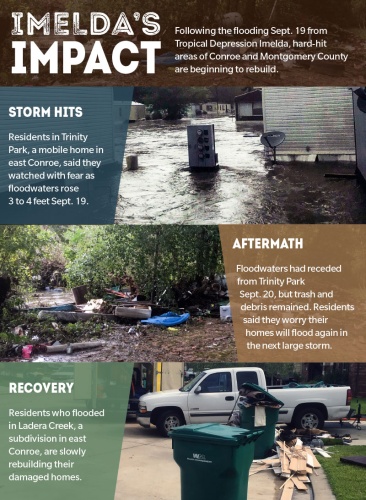 Just after the second anniversary of Hurricane Harvey, Tropical Depression Imelda hit Southeast Texas, including the Conroe and Montgomery areas, on Sept. 19. While most floodwaters had receded by the following day, some neighborhoods, particularly in east Montgomery County, sustained significant flood damage.

“In less than 24 hours, we received more rain than we saw in four days during Harvey,” said Darren Hess, Montgomery County’s director of homeland security and emergency management, at a Sept. 24 Montgomery County Commissioners Court meeting. “As the waters began to recede, we saw the damages.”

Hess estimated 1,500 homes were damaged countywide and more than 100,000 yards were filled with debris. Most of the damage fell in precincts 1 and 4—which includes portions of the Conroe area—with 75 and 1,104 homes damaged, respectively, as of Sept. 24.

Rainfall intensity varied across the county with some places receiving less than 1 inch and others inundated with up to 32 inches of rain, officials said. Meanwhile, some neighborhoods that are historically prone to flooding, such as the River Plantation subdivision, were spared, while others flooded for the first time, residents said.

“My mother-in-law has lived for 47 years in her house on Southern Oaks. Never flooded like this,” Spring resident Kevin Gregston said in an email. “[After Imelda], there was 2 inches in her house. Everything is gone.”

Now, officials and residents are looking toward both short- and long-term flood recovery strategies.

“While the emergency response side of Imelda is over, we are still very much in recovery,” Hess said.

In the early morning hours of Sept. 19, Hess said his office was closely watching the storm develop in the northeast corner of the county before spreading south—and worsening.

“We went from a Level 3 activation [a small incident] to a Level 1 activation [a major event or regional disaster] in a matter of hours,” he said.

“We were all out there, all hands on deck,” he said.

As waters rose, cars were left stranded, Smith said. The following morning, many roads remained impassible, including Hwy. 242 at Kropik Road, FM 3083, and Moorhead Road, all in Conroe, according to the Montgomery County Office of Homeland Security and Emergency.

Meanwhile, Willis ISD, Conroe ISD and several Lone Star College System campuses, including LSC-Conroe Center and LSC-Montgomery in The Woodlands, closed Sept. 19. CISD’s Caney Creek High School flooded—sustaining damage to the flooring and drywall—and did not resume classes until Sept. 25, according to the district. All county facilities were also closed Sept. 19, Hess said.

By contrast, some parts of the county remained relatively dry. The city of Montgomery recorded 0.77 inches of rain Sept. 18 and 1.92 inches on Sept. 19, City Administrator Richard Tramm said.

In general, neighborhoods in east Montgomery County were hardest hit. Some homes have routinely flooded while others were first-time flood victims, residents said.

Chuck Gilman, director of water resources and flood management at the San Jacinto River Authority, said although he cannot say why specific homes did or did not flood, overall flooding was largely dependent on rainfall intensity, location and duration.

Residents of Ladera Creek, a subdivision in east Conroe, said the neighborhood did not flood during Harvey, but they estimate between eight and 18 homes flooded during Imelda.

Resident David Lewis, who moved into his new home earlier this year, said water rose 4 feet in 45 minutes around 6 p.m. Sept. 19, and he estimates the neighborhood received 20 inches of rain. As of Oct. 4, Lewis said he has temporarily moved in with a relative while he repairs his own house.

Meanwhile in Trinity Park, a mobile home park in east Conroe, residents said they feel the city is not doing enough to help prevent flooding in their community, which also flooded during Harvey and the Memorial Day floods in 2015.

Resident Jessica Ayala said she had to wade through knee-deep waters while carrying her baby to seek shelter. On Sept. 20, a crew was outside repairing her home, but the ground was strewn with debris and trash.

“[We need] more help with cleaning,” she said. “The water left; the trash is here.”

Conroe City Administrator Paul Virgadamo said the city is aware of flooding issues in Trinity Park from Little Caney Creek. However, the city cannot clean up the creek without a permit from the U.S. Army Corps of Engineers, he said.

In the Deer Trail II subdivision northeast of Conroe, about a dozen homes flooded, resident Sunny Conti said in an email. Conti said her portion of the neighborhood was built one year ago and had not flooded before.

Meanwhile, significant damage was not apparent Sept. 20 in the River Plantation subdivision, which has flooded during various rainfall events such as Harvey and the Memorial Day 2015 floods, Community Impact Newspaper previously reported. Resident Amy Aguilar said although her backyard flooded, water did not enter her home, and she is not aware of any houses that flooded.

Aguilar said she believes the neighborhood was spared this time because water was not released from Lake Conroe—as was the case during Harvey—which some residents and officials said can exacerbate flooding conditions downstream. Because lake levels remained below normal, the dams remained closed during Imelda, according to the San Jacinto River Authority, an entity that sells surface water from Lake Conroe.

Gilman said without an analysis of the specific subdivision, he cannot comment if there was a correlation between not releasing water from Lake Conroe and flooding conditions.

On Sept. 19, Gov. Greg Abbott declared a state of disaster for 13 Texas counties, including Montgomery. This was followed by a presidential declaration of disaster Oct. 4, by which the Federal Emergency Management Agency made disaster assistance funding available for individuals affected by Imelda. Applications for funding will be open until Dec. 3.

At an Oct. 8 meeting, county commissioners said they would wait and see if the county would receive any funds to help with recovery, although they did approve the purchase of road materials for Precinct 4 not to exceed $200,000.

“I’m not a guy that likes to ask for help,” Precinct 4 Commissioner James Metts said Oct. 8. “We like to take care of things on our own, but after talking to Darren Hess this morning, we’re around $15 million [in damages] just for roads and bridges right now.”

At a Sept. 24 meeting, Montgomery County commissioners had approved a notice to assist with debris removal not to exceed $1.2 million as well as a contract with Hagerty Consulting for damage data collection, debris monitoring and reimbursement assistance not to exceed $750,000. The county began debris pickup Oct. 3.
Meanwhile, Montgomery County has been looking toward long-term flooding solutions.

In 2016, the county partnered with SJRA and the city of Conroe on a grant application to the Texas Water Development Board for the first phase of a study, Community Impact Newspaper previously reported. TWDB provided $460,000, the city of Conroe contributed $140,000 and Montgomery County contributed $90,000, while the SJRA’s portion was $230,000.

In July 2018, SJRA partnered with five municipal utility districts on a grant application to TWDB for the second phase of the study. This phase includes the development of reservoir operations tools for Lake Conroe and a Spring Creek watershed flood control reservoir and detention feasibility study. The state funded a portion of the grant application, while the TWDB awarded $150,000. Gilman said he does not have a concrete timeline for the second phase.

The county is also moving forward with its home buyout program, which could potentially allow for 400 homes that have repeatedly flooded to be bought out in November or December. To learn more about home buyouts in Montgomery County, see Page 17.

Andy Li and Kelly Schafler contributed to this report