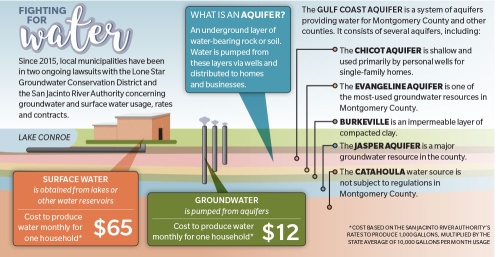 Where water is sourced, its cost and who gets to use it has been a point of controversy for Montgomery County residents and water authorities for several years.

The dispute could come to a head in 2019 depending on the outcomes of ongoing lawsuits and decisions of the newly-elected Lone Star Groundwater Conservation District board that has been torn over the groundwater or surface water debate.

The city of Conroe and other utility providers sued the LSGCD—an entity regulating groundwater resources in Montgomery County. Shortly after, the San Jacinto River Authority also filed a lawsuit against the cities of Conroe and Magnolia for not paying water fee increases.

New LSGCD board members are among those who prefer groundwater over surface water because it is cheaper to pump water from underground aquifers than to purify
surface water.

Alternatively, some water experts —including the SJRA and LSGCD—are critics of that angle, asserting pumping groundwater from aquifers can deplete groundwater resources and lead to subsidence—or the lowering of the surface ground level—which can exacerbate flooding.

A September 2018 report by the Harris-Galveston Subsidence District made for the LSGCD shows areas in southern Montgomery County dropped more than 2 inches between 2013-17. HGSD General Manager Mark Turco said Harris, Fort Bend and Galveston counties have witnessed the effects of subsidence on the region with some parts seeing a 10-foot drop since 1906.

“Harris County is going through the process of getting off of groundwater to stop subsidence,” Turco said. “Should groundwater be utilized as a primary source of water in southern Montgomery County, that could and will decrease water levels in Harris County and will continue the problem outside of Harris County’s control.”


Leading up to lawsuits

Montgomery County has pumped groundwater from the Chicot, Evangeline and Jasper aquifers for decades, but groundwater overuse became a concern in the 2000s when data collected from water wells in the county showed declining water levels and pressure, LSGCD General Manager Kathy Turner Jones said.

To address this problem and help manage the aquifers, Jones said the LSGCD board adopted a long-term planning mandate in 2006 requiring all large-volume groundwater users in Montgomery County—including Conroe—to reduce groundwater use to 70 percent of their 2009 totals by January 2016.

According to the SJRA's GRP Division, the GRP program cost $497 million to build the plant and water pipe transmission system, acquire land and hire personnel. Although completed in 2015, funding the plant required fee increases to supplement the cost of construction and maintenance. Since 2015, the SJRA’s surface water fee for utility providers has increased roughly 16 percent from $2.44 per 1,000 gallons in 2015 to $2.83 per 1,000 gallons in 2019.

In 2016, the cities of Conroe and Magnolia signed resolutions stating they refused to pay the SJRA’s fee increases, and instead remain at the surface water fee rate of $2.51 per 1,000 gallons. In response, the SJRA filed a lawsuit in Travis County against the entities in late 2016 for not paying the increase.

Meanwhile, the city of Conroe and seven other utility stakeholders filed a lawsuit against the LSGCD in 2015. Conroe city officials said the way the LSGCD chose to reduce groundwater consumption was illegal, and the mandate is based on incorrect research of aquifer levels—and that there is plenty of untapped groundwater under Montgomery County.

Webb Melder, former Conroe mayor and current LSGCD board president, was mayor when the city council voted to enter the GRP and file the LSGCD lawsuit. Melder said despite data showing well water levels dropping by hundreds of feet in some areas of the county, levels of individual wells are not congruent with the whole aquifer's levels. He said the data does not account for how deep the well is drilled and where the pump is located on the well.

“Some of these wells [can go] 400-800 feet deeper,” Melder said. “It does cost money, but it’s a lot cheaper than [the SJRA] surface water program, and it doesn’t take private property rights away from anybody.”

The Third District Court of Appeals ruled in August the SJRA may proceed with its lawsuit against the cities, which Conroe appealed to the Texas Supreme Court in early September. Houston said if the Supreme Court takes the case, the court will either affirm or deny the court of appeals’ ruling after hearing both arguments. If affirmed, the case could continue to trial, he said.

In mid-September, visiting Judge Lamar McCorkle ruled the LSGCD does not have legal authority to force large-volume users to reduce annual groundwater use. The district filed an appeal to the ruling Nov. 7, according to LSGCD board minutes.

Meanwhile, a movement pushed forward to replace the LSGCD’s appointed board with elected members. Since its creation in 2001, the LSGCD board has been composed of nine appointed members, but it held its first state-mandated election in November 2018.

Prior to the election, Simon Sequiera, president of The Woodlands-based utility company Quadvest—which is a plaintiff in the LSGCD lawsuit—helped launch nonprofit advocacy group Restore Affordable Water in early 2018 with the goal of campaigning for new board members. All seven candidates RAW endorsed via its website, now shut down, were elected to the board.

“We felt like if we got seven people on that board that understood private property rights … people in Montgomery County were going to be better off,” Sequiera said.

With a new board that primarily opposes the LSGCD’s regulations, the board has already made changes. Dec. 18, the LSGCD board voted unanimously to file an extension in the appeal and move forward to negotiate settlements with the city of Conroe and other plaintiffs. The board also hired a new law firm to represent the district, choosing to dismiss the LSGCD’s legal counsel following the lawsuit's conclusion.

Jones said the board voted Nov. 20 to postpone submitting the district management plan, a document intended to be filed every five years to the Texas Water Development Board detailing future management of groundwater resources.

“This new board feels like it's part of their responsibility to be very diligent and look through this [plan] before they adopt it,” Jones said.
SHARE THIS STORY