“Growth isn’t just coming to Montgomery ... it’s already here,” board President Matt Fuller said in an Aug. 17 release from MISD. “Since the demographic study was completed this summer, our district has already enrolled more students than were projected to enroll in the next two academic years. We have an obligation to our community to ensure we equip our staff and facilities with the tools and capacity needed to effectively educate students and serve families.”

During an Aug. 17 meeting, trustees approved working with architectural firm Huckabee for services, the first step toward planning for a bond election, according to the release. Next steps include MISD forming a citizens bond advisory committee with parents, staff, and business and community members and then holding meetings to discuss a potential bond.

Trustees would need to call a bond election no later than Feb. 18 for the May ballot, according to the release, with the advisory committee presenting possible bond projects to the board in January.
RELATED STORIES

• 'There’s always going to be another emergency or another disaster:' Lone Star College begins process to add fourth bachelor's program

“This process kind of started all the way back last year when we went to the board and asked for their support to do a demographic study,” Superintendent Heath Morrison said. “That showed some considerable growth to expect in the short term and long term here in Montgomery ISD, which always is good news. But obviously you have to plan for growth, and so that starts the conversation about a potential bond.”

In addition to a demographic study, MISD completed a strategic plan and a facilities assessment to gauge the need for district upgrades and additions, Morrison said.

Voters in MISD last approved a bond package in May 2015, which included $256.75 million of projects such as the construction of Lake Creek High School, Oak Hills Junior High and Keenan Elementary, according to district information.

Although an advisory committee has not yet discussed the specific projects that could be included in a 2022 bond package, Morrison said the demographic report shows potential needs for a seventh elementary school, land for an eighth elementary and third middle school, and Phase 2 of Lake Creek High School.

MISD officials said the second phase could include additional classrooms and career and technical education capacity.

The district is also focused on enhancing technology infrastructure and its CTE programs.

“We want to make sure that when a student goes across the stage in a Montgomery ISD school that they are just as ready to enter the world of work as they are a college [campus], and our commitment to CTE facilities has to be a part of that consideration,” Morrison said.

Under a moderate-growth scenario—which anticipates 4,185 more students districtwide by 2030-31—the district is projected to add 2,069 students at the elementary level from 2021-22 to 2030-31, according to the PASA report. The projected growth would place Keenan, Stewart Creek and Lincoln elementary schools over 120% capacity by 2025-26, 2026-27 and 2027-28, respectively, according to the report. By 2030-31, Montgomery Elementary School would also exceed 120% capacity—the number used by demographers to highlight the need for additional capacity.

A moderate-growth scenario also places both junior high schools over 120% capacity by 2030-31 and Lake Creek High School over the threshold by 2026-27, according to PASA. 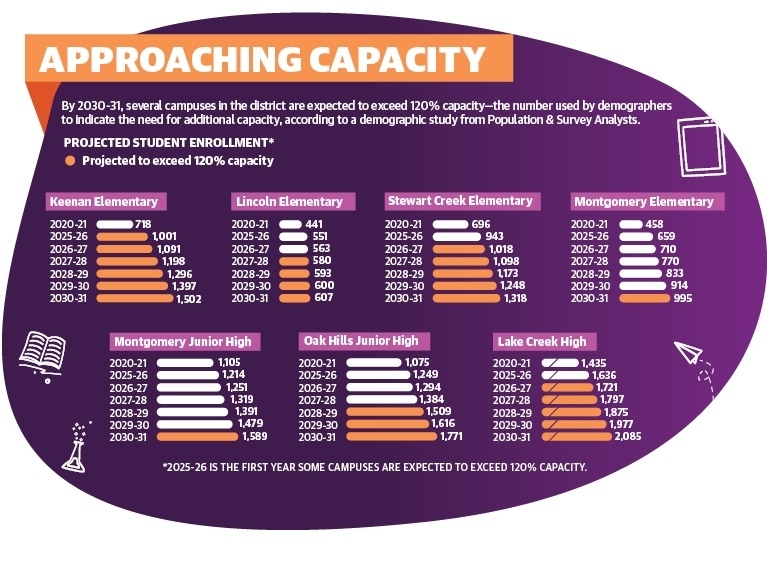 Chief Financial Officer Kris Lynn said while growth is happening districtwide, many new developments are located along Hwy. 105, such as Pine Lake Cove—a 269-acre community south of Hwy. 105 with 750 homes projected by 2030 in the PASA report.

“The growth, facilities, comparability [of facilities], instructional programming are all things that are going to be considered by this task force in making a recommendation to the board for a potential bond,” Morrison said.


Planning for a bond

As the planning process is just beginning, Lynn said it is too early to know how a bond could affect the overall property tax rate.

“Obviously the district’s intent is to minimize the impact as much as possible while still meeting the needs of the district as we look toward the future,” Lynn said.

Lynn said the advisory committee is expected to meet in October through early December to discuss whether a bond package is needed and what projects could be included.

The district also plans to host a series of town hall meetings to gauge community input; meet with presidents of parent teacher organizations and associations from each campus; and survey parents, students and staff, Morrison said.

Following community input, the advisory committee is expected to share its recommendations to the board in January, Lynn said. Trustees must then call a bond election in February for the May ballot if a bond is to be pursued, he said.

“As everything we did as we showed with the creation of our strategic plan last year, there’s always a very intentional desire to get as much public input as possible into important decisions that we’re making in the district,” Morrison said. 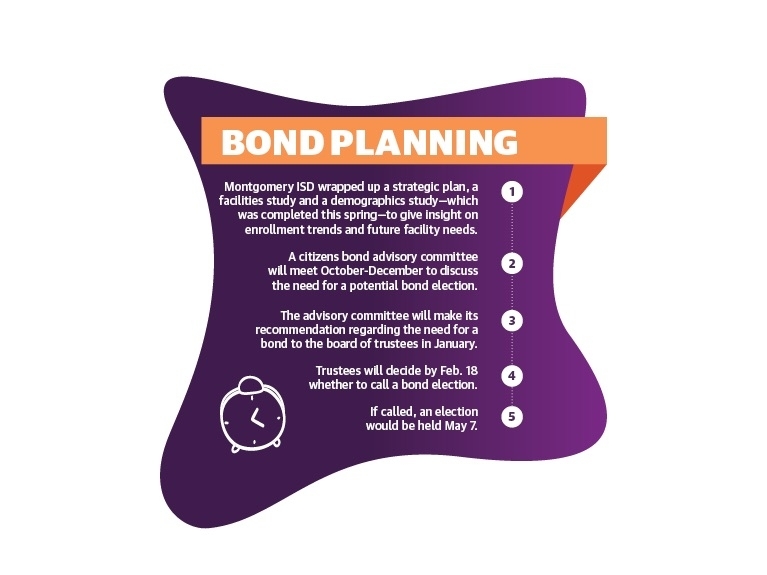 Data by the decade: Here's how demographics have changed in Conroe, Montgomery since 2000

The Conroe, Montgomery and Montgomery County populations have more than doubled since 2000.