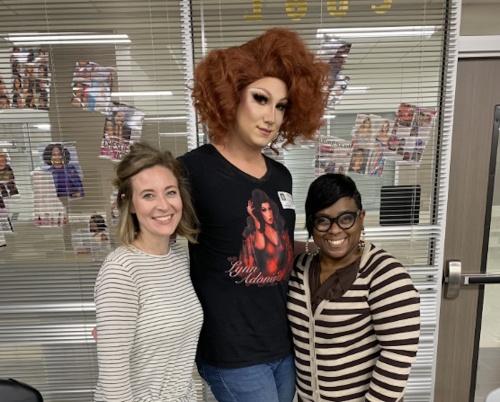 On Oct. 18, a Willis High School cosmetology teacher hosted a drag queen who performs under the name Lynn Adonis-Deveaux to speak in front of the class. Community Impact Newspaper was unable to confirm Adonis-Deveaux’s legal name.

According to a statement from WISD sent to parents, the administration was aware Adonis-Deveaux performed in drag previously, but was understood they would not be in “full drag.”

“School administrators learned at the end of the day that the man was wearing jeans but also wore heels and makeup,” the statement said. “However, the speaker did as asked, which was to talk to students about makeup application. The guest speaker did not discuss sexual orientation, lifestyle or anything else other than makeup application.”

Oh Miss Lynn Adonis, how we thoroughly enjoyed your company today! Laughs all day and memories we’ll never forget. So thankful for you! pic.twitter.com/Y7GjPziQsJ

Inman said a parent contacted him after the event and asked him to do something. He said although he is a CISD trustee, he has three daughters that attend WHS and wanted to find out more about the event.

“I put numerous calls into the administrator’s office, which of course they made it abundantly clear they will not talk about it,” Inman said.

Inman said he does not have a problem with Adonis-Deveaux but does not approve of them being allowed in front of children.

“I’ve got a problem when somebody with a false name enters a school and has advertised himself as an adult exotic dancer for men … Nobody would be allowed in a school under those circumstances,” Inman said.

According to several screenshots posted to Facebook, WHS did include the event on its monthly calendar, called “Drag Queen/Makeup Class.” However, Inman said Adonis-Deveaux is not a licensed cosmetologist.

“As a parent, I have a right to know who’s in that school building,” Inman said.

In the days following, Inman made several Facebook posts about the issue, saying he does not want “Harris county alternative lifestyles promoted to children in Montgomery county schools.”

Several other parents took to Facebook to express their anger and concern. In a Facebook group called “Willis ISD Concerned Parents,” several parents criticized the administration for not informing parents and allowing them to opt out of the event.

Inman said since the initial incident, his daughters have been harassed and bullied at school.

“The LGBTQ community is one of the most vile, hate-filled communities I’ve ever come across and I’ve spent time in the Middle East with Hezbollah and radical Muslims,” Inman said. “These folks are vicious.”

In its statement, WISD said it had examined its policy on guest speakers and “have made some adjustments in regard to communication to better serve the Willis ISD Community.”

Inman clarified that he did not want to drag CISD into the debate and that the issue was about parent-administration communication. He said he spoke with Superintendent Curtis Null about crafting a statement clarifying that every CISD student is welcome, no matter their sexual orientation or “gender choices.” However, he said if someone with a job in the sexually oriented business wanted to speak on campus, they would not be allowed.

“I would hope the board would know we are not going to bring or allow anyone in with an extremely controversial background or job profession,” Inman said.

Adonis-Deveaux has since deleted or deactivated her social media accounts.

The next WISD board of trustees meeting is scheduled for Nov. 11 at 5:30 pm at the Cargill Administration Building located at 204 W. Rogers Rd., Willis.
SHARE THIS STORY