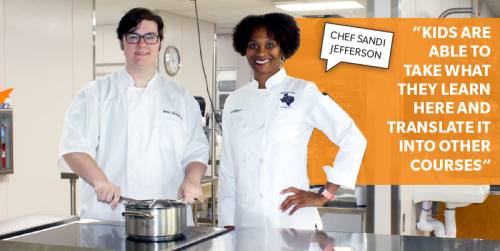 Travis Utecht, the director of career and technology education, said more than 160 students applied for the two Introduction to Culinary Arts classes at the center, which each have 50 spots. He said of the many courses in the center, the culinary program has risen to match the most popular programs such as welding, criminal justice and health sciences.

“It’s been an absolute dream this year,” Utecht said. “I’ve probably put on 10 pounds [last] year, eating all the different types of food they’ve made me [last] year, but it was worth it.”

Willis High School senior James Hudley Jr. said his culinary course at the CTE center and the teachings of chef Sandi Jefferson have prepared him for his goal of being a professional chef.

“It was really fun just to go through and learn it all,” Hudley said. “Every day was different.”

Jefferson said in her course, students learn the basics of cooking from food safety and sanitation to knife skills. She said as students progress, they learn more complex concepts such as creating a menu or marketing.

“Kids are able to take what they learn here and translate it into other courses,” Jefferson said.

Jefferson said this year, students will now prepare food for the staff every Thursday. She also wants to invite local chefs and bakers to share their knowledge with the students.

The $39.4 million center was funded out of a $109.5 million bond in 2015, the largest bond in the district’s history, according to Utecht. The other projects funded include a new elementary school along M.P. Clark Road, the expansion of parent drop-off lanes at Meador, Turner and Cannan elementary schools, field turf installation at Berton A. Yates Stadium and a track at Brabham Middle School.

Jefferson said she hopes taxpayers know their money has helped students not only learn about cooking but about life in general.

“Food is an integral part of our society," Jefferson said. "We’re all connected through food. … I want the community to know that it was money well invested, that will pay itself off tenfold in the future, whether these kids learn to take these skills and use them with their families [or] whether they are able to get a job and use these skills to work their way through college.”