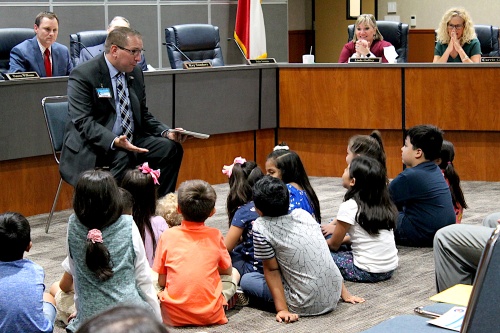 Superintendent Curtis Null read to a group of bilingual students at Conroe ISD board of trustees' regular meeting Sept. 17.

The attendance zones of several Conroe ISD junior high schools will shift with the opening of Stockton Junior High in August 2020.

At a regular meeting Sept. 17, the Conroe ISD board of trustees heard a presentation from Deputy Superintendent Chris Hines on the Attendance Boundary Committee’s work to study the student growth in the area to create a recommendation for zoning when Stockton opens.

“We get the question of, 'Why do we have to do this? Why do we have to redraw boundaries?'” Hines said. “The most common reason is that we adjust the attendance boundaries when we open new schools to meet the growth. And the district is growing.”

Hines said the committee is aware of how difficult rezoning can be, as many families choose to live in certain areas specifically for the schools. However, with the 10-year projection for enrollment in the Conroe High School junior high feeder zone at 3,500 students and the capacity of Stockton and Washington at 2,900, Hines said it is important for the district to develop a plan now.

The committee is made up of district employees and parents who live in CHS feeder zone. Hines said the committee will begin meeting in early October and receive community input throughout the fall before presenting a recommendation in January.

“We understand the significance of this process—we don’t take it lightly,” Hines said.

The grant stipulates the district must agree to operate the new buses for at least five years and either scrap the old buses or remove them permanently from Texas in order for the program to provide up to $73,800 of the cost for each diesel bus and $106,400 for each propane bus.

“All of them will be air-conditioned and have seatbelts as well,” Trustee Ray Sanders said.

Also during the meeting, Director of Planning and Construction Easy Foster presented the completed construction of Grand Oaks High School. The original contract was for approximately $136 million, but the project’s actual cost was $133 million.

Trustee Skeeter Hubert clarified that the original project was not overbudgeted, which Chief Financial Officer Darren Rice confirmed, saying there were many mitigating factors that allowed the district to save money.

The trustees also authorized refunding a portion of its bond debt at a lower interest rate, resulting in savings of approximately $8 million, according to Rice. The refund includes debt from bonds in 2009 and 2011.

“This represents a savings of approximately 9% on the projected debt service for the refunded bonds,” Rice said.

The next regular CISD meeting is scheduled for Oct. 15 at 6 p.m. in the Deane L. Sadler Administration-Technology Center, located at 3205 W. Davis St., Conroe.