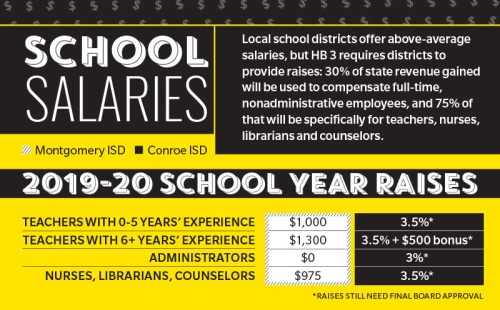 This article has been updated to clarify Rep. Steve Toth supports HB3 on a whole.

As the Texas Legislature ended its session May 27, one significant bill addressing both property taxes and school funding is affecting local school districts.

Although Conroe ISD might see more money, much is planned to go to staff raises: District officials expect to see an additional $22.9 million from HB 3. The bill requires Montgomery ISD—which is facing a multimillion-dollar shortfall for the second year—to give raises not originally in the budget, and to lower property taxes.

State Sen. Brandon Creighton, R-Conroe, said HB 3 is the third most significant overhaul of school finance in Texas in 84 years.

“It’s a historic legislative effort on behalf of public schools, our teachers and education reform going forward,” Creighton said. “It’s incredible. It not only pays our teachers more, [but also] directs more state dollars directly to the classroom and increases the state’s share of public education.”

HB 3 requires districts to use 30% of state revenue gained to compensate full-time, nonadministrative employees, using 75% of that for teachers, nurses, counselors and librarians.

The CISD board of trustees unanimously approved a 3.5% raise for teachers, nurses, counselors and librarians for the 2019-20 school year June 19. Although the board approved the recommendation, it will still need to finalize the raises when it approves the 2019-20 budget.

Opponents of the bill worried about the sustainability of such an increase.

“They give you the money for it these two years,” said Trustee John Husbands at the June 4 CISD board meeting. “How about those next two years when we have a different setup there?”

State Rep. Steve Toth, R-The Woodlands and co-author of HB3, said the $5.1 billion tax compression is the largest the state has ever given and is supportive of HB3 on a whole, but he was still apprehensive about some programs including full-day pre-K.

“There is some funding now, but I’m telling you it will go away,” Toth said. “This is the heavy hand of government in the state of Texas telling local ISDs what to do, and I don’t support it.”

The bill caps tax rates at $0.97 per dollar for the next two years, requiring MISD to lower its tax rate, MISD Executive Director of Finance Kristy Conrad said during a June 25 meeting.

The district’s maintenance and operations tax rate is $1.04 per $100 valuation, so officials expect to lose money from this source. MISD already faces a $4.39 million shortfall for the 2019-20 school year.

Although not set in stone until official weighed average daily attendance numbers come in January, MISD is estimating it owes $4 million in recapture funds—shared to property-poor districts—back to the state for fiscal year 2019-20.

He said the raises are lower than what other districts are giving because MISD originally budgeted no money for raises this year, and other districts—such as Humble ISD, which Rees said is giving a 7% raise—are stacking planned raises on top of HB 3-required raises.

“I’d say [HB 3] is positive in that raises were there, provided for, the tax rate dropped and [recapture] was reduced,” Rees said. “The rest I think we’ll have to wait and see, but I do see those three things as being very positive for our district.”
SHARE THIS STORY