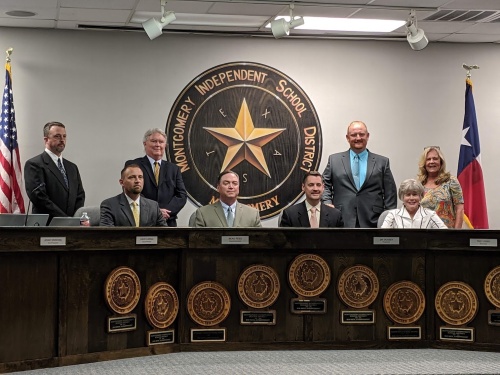 The Montgomery ISD board of trustees discussed the 2019-20 budget at its June 25 meeting.

For the second year in a row, Montgomery ISD is facing another million-dollar shortfall for the 2019-20 school year.

At the June 25 board meeting, trustees adopted the 2019-20 general operating budget, the child nutrition budget, the debt service budget and the employee compensation plan, factoring in raises and reduced property tax rates made mandatory by the passage of House Bill 3.

With a planned $72.78 million net revenue in the operating fund this school year, the district is still facing a $4.39 million shortfall, expecting the school year to cost $77.16 million, officials said.

Last year MISD faced a $6.9 million shortfall, which the district was able to reduce to $5.6 million by trimming 10% from the budget, officials said throughout the year. To mitigate costs of recapture "Robin Hood" payments—part of the Texas Education Code that makes provisions for certain school districts to share their local tax revenue with other school districts—owed to the state along with the costs of opening the new Lake Creek High School and Lincoln Elementary School, the district set the 2018-19 school year to a 10-month budget season.

"For the first time, we're asking the board to approve a ... [shortfall] budget of $4.3 million with the goal of getting us to a break-even budget in the next year," Conrad said.

"To me, I'm a penny person. I think you get to $1 million one penny at a time," Conrad said. "The goal was, like we said, not to impact the classroom."

Another factor is the compression of school districts’ property tax rates required by HB 3, which caps rates at $0.97 per dollar for the next two years, Conrad said. MISD's tax rate is currently $1.37, so the district will lose money from this source.

"When we went out for the bond originally, it said taxpayers agreed to go up the $0.3375 amount, so we wanted that last quarter," Conrad said. "In August we can come back and adopt the $0.97 tax rate."

Trustee Gary Hammons raised the question about how to afford this year's teacher and administration raises required by HB 3.

"Out of HB 3, the total amount of moneys we received, we had to set aside 30% from all new moneys ... to be allocated to pay increases for everyone other than administrators," Rees said. "The total compensation we received from HB 3 was $1.7 million, divvied up to 75% to teachers and 25% to everyone else [of the 30% required to go toward raises]. ... That's how that shook out."

He said the raises are lower than what other districts are seeing because MISD originally budgeted no money for raises this year and other districts—such as Humble ISD, which Rees said is giving a 7% raise—are stacking planned raises on top of HB 3-required raises.

"I'd say [HB 3] is positive in that raises were there, provided for, the tax rate dropped and ... recapture ... was reduced," Rees said. "The rest I think we'll have to wait and see, but I do see those three things as being very positive for our district."
SHARE THIS STORY