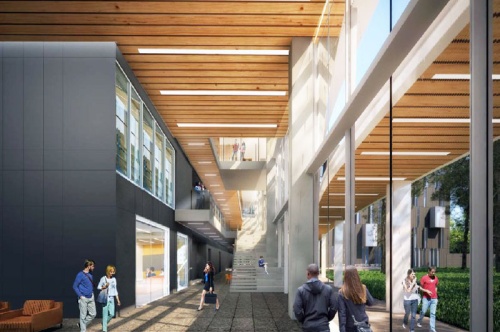 This article has been updated to reflect that SHSU has requested a start date of fall 2020 and a class size of 150, which has not yet been approved by the Commission on Osteopathic College Accreditation.

A duo of four-year universities is bringing new satellite campuses to Conroe, where students will soon be able to earn bachelor’s degrees without leaving town.

The University of St. Thomas announced March 22 it is working to acquire the former City Hall building at 700 Old Montgomery Road in Conroe for its new campus. This comes after Sam Houston State University broke ground on its 7.3-acre College of Osteopathic Medicine at Grand Central Park in November.

Both universities plan to offer medical certifications in Conroe to meet a growing need for primary care physicians in rural areas and a need for access to four-year degrees.

“We want to make sure that we focus on what is unique and special about Conroe and really that whole northern part of the metro area,”

St. Thomas President Richard Ludwick said. “Conroe is one of the fastest-growing communities in the area with the sort of sky’s-the-limit potential for us, which is very exciting.”

SHSU plans to offer osteopathic medicine—full physician licenses—with labs and residency training programs at its new facility under construction, and although tentative, St. Thomas is considering offering nursing and science degrees, and a master’s of business.

SHSU has been working on its Conroe campus proposal since 2015 to meet the needs of the medically underserved East Texas region.

“Our mission for the medical school is to focus on East Texas,” said Charles Henley, dean of the SHSU osteopathic college, in February. “East Texas is primarily a rural [area], so we’re looking at more rural and underserved communities we want to support.”

Ludwick said St. Thomas will consider accepting 200 students beginning in August 2020. SHSU is also scheduled to admit its first class of 75 in August 2020 after building a new five-story, 216,000-square-foot building in Grand Central Park—although future enrollment and growth plans beyond that are undetermined for SHSU.

Officials said SHSU requested a start date of fall 2020 and a class size of 150 from the Commission on Osteopathic College Accreditation, which has not yet been approved. If approved, the proposed campus would begin instruction at the designated time with half a class of 75 students, increasing over several years until 150 students are attending.

“One of the really exciting things about this is it can go in a lot of different directions. To help us do that, we have some ideas about maybe expanding into the Deison [Technology] Park,” Ludwick said. “After we are solidly there in the old City Hall building and we need to expand beyond that ... we don’t know exactly what that will look like today—we have some ideas, we’re dreaming.”

“When you’ve got good jobs, you’re going to have good schools,”

Czajkoski said. “When you’ve got good schools and good jobs, you’re going to have the tax base to have good infrastructure like new roads and water.”

“Roughly 14% enter the workforce, and we think most of those students will in six months to one year also start a class or certification program at [LSC-Montgomery],” Willard said.

Local ISDs are already attempting to meet workforce demands in the area by offering career and technical education that can count toward both high school and LSC-Montgomery credits.

Students enrolled in Montgomery, Conroe and Willis ISDs can pursue CTE certifications they can use to go into the workforce, pursue skilled trades or work a side job to pay for college.

CISD began offering cyber security and hospitality and tourism programs this year, MISD added real estate licenses and cosmetology courses this year, and WISD added a culinary arts certification as well. All three have kept up with offering CTE courses in law and security, business and marketing along with arts and sciences.

As for the CISD grads who leave town to pursue four-year degrees, it is difficult to track who comes back to live in Conroe.

“But what we do see is many [former] students come back ... in their mid-thirties because we know that this area, our school district, is an excellent place to raise children,” Willard said.

Danielle Scheiner, executive director of the Conroe Economic Development Council, said the CEDC is excited for new medical programs to come to Conroe. She said area hospitals have been trying to shift away from contract nurses toward full-time employees, but the effect has been poaching talent.

“I think having additional trained nurses in the area will be a benefit, for sure,” Scheiner said. “A larger pool to draw [employees] from, for companies it will be a little less fierce—right now, they’re just stealing [nurses] from each other. That happens in a low-unemployment, tight job market.”

Poldi Tschirch, dean and professor of the Carol and Odis Peavy School of Nursing at St. Thomas, said her faculty is delighted at the opportunity to bring the nursing program to Conroe.

“The encouragement that we have received from community leaders, outstanding clinical facilities and potential student population all will contribute to a successful partnership between the university and the community,” Tschirch said.

Scheiner said she expects the new universities to complement the skilled trades programs already in place in Montgomery County because there are more jobs than residents, with a labor force of 43,000 living in Conroe but 47,696 total workers employed.

Ec“Having those programs here will certainly allow [local grads] to stay closer to home, whereas a person from Conroe who wanted to study nursing can now study it here without having to go elsewhere,” Scheiner said. “In that aspect, there could be a benefit to keeping our young folks here in town and [have them] be able to complete their programs ... without having to go elsewhere and ideally want to stay and raise families here just as they were raised.”