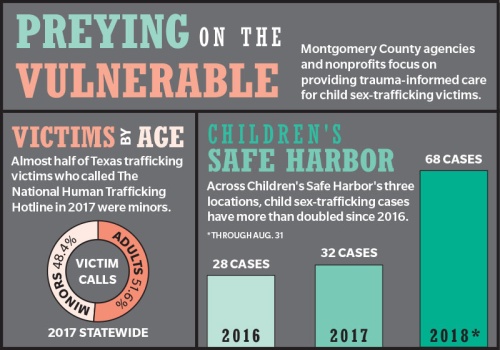 In February, mother Sarah Peters traveled from Houston to Conroe with the intention of prostituting her 2-year-old daughter. Upon arrival, Peters was arrested by Montgomery County law enforcement as part of an undercover online sting operation.

On July 12, Peters pled guilty to three felonies, including attempted human trafficking, and was sentenced to 40 years in prison, according to the Montgomery County District Attorney’s office.

Tyler Dunman, chief prosecutor for the DA’s office, said the arrest was part of an increased effort by Montgomery County agencies to proactively investigate and prosecute human traffickers—a problem that is becoming more readily apparent in the county.

“It happens fairly frequently where we have adults basically trying to sell kids for sex,” said Dunman, who is chief of the county’s Special Crimes Bureau and head of the Internet Crimes Against Children/Child Exploitation taskforce.

That same year, the Montgomery County Coalition Against Human Trafficking, a group of local nonprofits and agencies, was founded as a way to collaborate in anti-human trafficking efforts. Since then, the MCCAHT has partnered with entities in Harris County as well as state and federal agencies.

“We know that human trafficking has been happening in Montgomery County for a number of years … but most of that has fallen under the radar,” Dunman said. “In the last several years as we begin to focus in on this issue, we’re starting to see numbers appear.”

According to a December 2016 report from the University of Texas at Austin’s Institute on Domestic Violence and Sexual Assault, there are an estimated 313,000 survivors of human trafficking statewide. Human trafficking is often categorized into labor trafficking—which includes domestic work, agriculture, peddling—and sex trafficking.

According to the Montgomery County DA’s office, it prosecuted 70 charges of human trafficking in 2017 and 47 in 2018, as of early October. Statistics are not available for previous years, as the county began tracking cases in 2017, Dunman said. As of mid-September, the county is currently investigating 48 international sex-trafficking operations in the county—24 of which are located in the Conroe and Montgomery area.

Lt. Tim Cannon, who serves as head of the organized crime unit, said joining the HTRA has helped the sheriff's office take down more trafficking operations.

In most cases, trafficking is hiding in plain sight, Cannon said. A majority of the human-trafficking cases in Montgomery County involve international sex trafficking where brothels are disguised as massage parlors, strip clubs, bars and cantinas.

“[Traffickers] like to go where there’s more densely populated areas because they blend in,” Cannon said. “Whether it be Conroe or The Woodlands area ... that’s where these types of environments like to house because they fit into retail centers and places like that where they go unabated or unchecked.”

In June, the DA’s office launched Project Assisting Victims Escape or Resist Trafficking, or Project AVERT, to help individuals arrested on suspicion of prostitution who may be human-trafficking victims. Project AVERT is a pretrial program helping divert qualified criminal defendants from the justice system who are victims or at risk of human trafficking, Dunman said. Once participants complete the program, cases against the victims—who might otherwise be charged with prostitution—will be dismissed, Dunman said.

While victims of sex trafficking range in age, the University of Texas report estimated approximately 79,000 of the total victims in Texas were 17 years old and younger. Children in the foster care system, those who have experienced abuse and homeless children were identified as being most at-risk of sex trafficking in Texas, the report states.

To protect the privacy of minors, the Montgomery County DA’s office could not release statistics regarding child exploitation and sex-trafficking cases. But Dunman said child sex trafficking is a problem in Montgomery County, and residents need to be aware.

“The trauma that has been inflicted on someone [who has been trafficked] is ... somewhat akin to someone who has experienced combat—it’s extremely significant trauma to the brain,” he said. “These nonprofit groups come in and provide services to the victims so we can get them to a place where they can be helpful to the investigation and, of course, recover themselves.”

Program Director Kari Prihoda said the center’s advocates assigned to each case serve as a point of contact for victims and their families, from interventions to investigations and prosecution.

In recent years, CSH has seen an increase in child sex-trafficking victims at its three facilities in Conroe, Huntsville and Coldspring, Prihoda said. Since 2016, CSH’s sex trafficking cases have more than doubled across its three locations, from 28 cases in 2016 to 68 cases in 2018, as of Aug. 31.

“Our numbers have increased partly because [of] the work that Montgomery County is doing as far as the district attorney’s office,” she said. “But we’ve always taken the same approach … of working as a multidisciplinary team to reduce trauma to the kids and families that are being brought to us.”

Since the facility opened in May, Home of Hope has received an influx of requests from across the nation to house adolescent girls due to the limited resources available for adolescent trafficking survivors, Davis said.

“Adult trafficking is just as bad as for kids, but you have more resources for them,” he said. “Now, everybody is trying to get involved to help, which is good because when we started [fundraising] back in 2012, there was none of this. … The resources weren’t there.”

“When the kids are picked up, [officials] need a place to drop them off where they can get assessment, get food, meet the immediate needs that [specific] kid needs, and then try to find a long-term place for them,” Davis said. “There is really no short-term facility in Montgomery County that is dedicated to human trafficking. We’re hurting; we’re hurting bad for that.”
SHARE THIS STORY