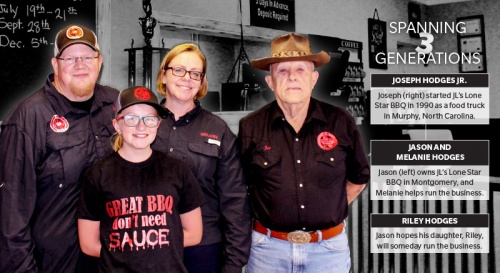 JL’s Lone Star BBQ started in Murphy, North Carolina in 1990 as a food truck, but in 2014 made the 900-mile journey to Montgomery—and recently transformed from food truck to freestanding restaurant June 26.

He said he specializes his Texas barbecue with a “Carolina twist”—specifically, a vinegar sauce to baste the meat. He said Texas barbecue is a dry rub and can take up to six hours to cook. Hodges said the most popular menu items are the Carolina-style pulled-pork sandwich, brisket and ribs.

“I cook everything on an insulated barbecue pit. Everything stays moist and tender,” Hodges said. “You’ve got to taste it to understand it.”

Hodges said in the few weeks he has been open, he sold out of meat every day. On his first Saturday in the new brick-and-mortar restaurant, Hodges cooked more than 110 pounds of meat—selling out in 2 hours and 37 minutes.

Although many people came to him when the store was a food truck, he said a lot of customers are first-timers.

“I’ve had people come in; there are a few of them that come in every day,” Hodges said.

Hodges revived the family restaurant as a food truck in 2015. The truck would go to Blue Epiphany Vineyard and other businesses to sell, but he said customers told him they would come out more regularly if he had a static store.

“I’ve always wanted the storefront again. I like the customer interaction, you get more of it in a restaurant than at a food truck,” Hodges said. “You’ve got window service there. In a restaurant you can walk around the dining room, make sure everyone’s doing OK.”

Although the community response has been positive, Hodges said he wants to keep the restaurant small.