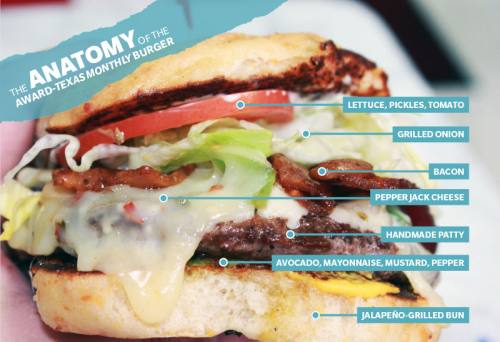 The Award-Texas Monthly burger ($12.98) is one of the remaining original menu items Canada kept when he took ownership.

Burger Fresh & More has been operating in the Conroe area since 1997, but when James Canada took ownership and revitalized the restaurant in March 2019, he continued a family legacy that stretches back to the 1930s.

The restaurant business is more of a family business for Canada—his grandfather moved to Conroe in 1935 and opened a grocery store and ice cream parlor, creating a legacy still seen today in the Blue Bell ice cream Canada uses. And family is still a part of the business today—Canada’s son works the grill, and his daughter handles the marketing.

“I designed it exactly how I wanted it with the retro ’50s feel, the ’60s and ’50s music, and just kind of concentrated on the burgers,” Canada said.

Canada said he renovated the interior with a ’50s-inspired aesthetic and changed the menu.

“They were using frozen patties, and it’s Burger Fresh so I thought they should be fresh,” Canada said. “I took a lot of stuff off the menu that nobody bought and added new stuff.”

In addition to burgers, Burger Fresh serves catfish, cheesesteaks and a growing ketogenic diet menu, added when Canada started on the diet.

“You’d never think at a burger place you could do that,” Canada said. “So I’ve got chicken, catfish, steak and the no-bun burger.”

Canada said the biggest challenge he faces is building a customer base because, despite how the restaurant has been in operation since 1997, few people know Burger Fresh is there.