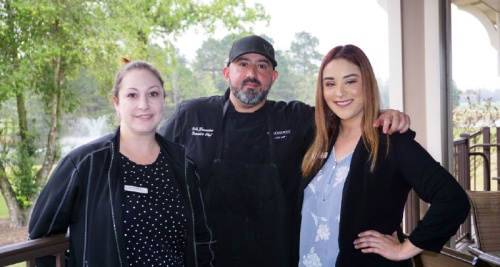 This article has been updated to reflect that Woodforest Grille is open to the public for breakfast, lunch and dinner.

Executive Chef Erik Gonzalez formerly worked for nearly eight years at a fully private golf course restaurant—The Woodlands Country Club Palmer Course—until 2016, when he started cooking at Woodforest Grille. Located along Fish Creek Thoroughfare in Montgomery, Woodforest Grille is a restaurant that rests on the Woodforest Golf Club’s greens—but is open to the public for breakfast, lunch and dinner.

In March 2018, Gonzalez advanced to the role of executive chef and has since elevated the restaurant and its reputation. His creativity and attention to detail in every dish he executes is notable in the flavors of the meats and fresh vegetables of the dishes.

Brining pork chops for 24-48 hours before smoking them at low heat for a few hours is an example of his attention to flavor and detail, which keeps bringing regular customers back for more, restaurant Director Amber Keyser said.

Working as executive chef at the semiprivate club means he has “a lot more freedom to be creative with the menu,” Gonzalez said, like creating ketogenic, gluten- or allergy-free dishes.

Now that the restaurant has acquired a smoker, Gonzalez plans to develop more cured meats such as bacon, pastrami, brisket and smoked prime rib.

“We’re a free-standing golf club, so we make sure we prioritize the club members,” Keyser said. “But [when] ... the public comes and has dinner, and we make sure to take care of all customers, too.”

“Finally getting the trust of the neighborhood has been a huge success [for the restaurant],” Event Coordinator Carolina Duarte said.