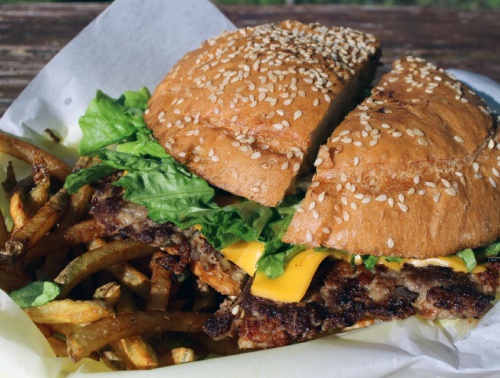 Cowboy Tacos and Burgers opened in June 2017 on an unassuming property off FM 2854. Owner Victor Ruiz, along with business partner and family friend Jesus Osorio, prepare fresh American and Mexican cuisine from a food stand in front of Ruiz’s father’s auto repair shop.

The duo’s kitchen has evolved into a local favorite specializing in fresh, homemade Tex-Mex.

Ruiz said it is important that the food is not only larger than life but that it tastes delicious, too.

They handmake almost the entire menu—from corn and flour tortillas to specialty meats for tacos—such as beef barbacoa, chorizo and carnitas, which can take hours or even days to prepare.

The tacos pair with the eatery’s four different house sauces ranging from a mild tomato sauce to an extremely spicy hot sauce made with seven different kinds of peppers, including scorpion and ghost peppers.

Ruiz and Osorio grind their own burger meat and offer a barbecue plate with a whole smoked chicken and sausage every Saturday. The menu items are all void of preservatives with a focus on fresh, quality dishes. Ruiz said he also plans to debut breakfast tacos this year.

“A lot has changed since we opened because we had no idea [how to run a restaurant]. We cook, but that doesn’t mean you know how to run a food business, and quality is big for us,” Ruiz said. “We had a hard time finding these items. Nothing fit our views of quality, but we tried it and eventually we came across a really good bread and then came across [how to make] ... the tortillas better.”

Ruiz managed pawn shops for eight years in the Greater Houston area while Osorio worked in the printing industry before opening the kitchen. When the shop he worked at was bought out, Ruiz decided to open the food truck he had wanted for decades.

“We didn’t open and have money in the bank like most businesses. We opened and literally had maybe 50 bucks the next day,” Ruiz said. “It can still be an issue not knowing what tomorrow is going to be like because you’re not promised a paycheck—that’s the difficult part. I honestly did not know it was going to be this hard, but I wouldn’t change it for anything.”