Montgomery County commissioners approved seeking construction bids for a new $11.8 million forensic center during a Sept. 22 meeting. The center will better serve the county after years of burgeoning caseloads and a lack of space in the current facility, which has resulted in bodies being stored in refrigerated shipping containers, officials said.

Before the current forensic center was built in 2011 on Hilbig Road in Conroe, Montgomery County used to contract with other counties such as Harris and Dallas to perform autopsies. The process of transporting bodies was tedious and costly, and years later, officials still recall the emotional toll.

“I had this poor grandmother call me every two weeks for nine months wanting to know why her child passed away, and she was crying, and I didn’t have an answer for her,” Precinct 4 Commissioner James Metts said.

In 2011, the county repurposed an old RV storage space to a forensic center. It was not originally designed to store bodies—morgues require special insulation and ventilation—but for a while, it worked, Precinct 2 Commissioner Charlie Riley said.

“We all knew ... that this was a temporary solution,” Riley said.
RELATED STORIES

• 'We have a lot of folks that have never needed assistance before:' Pandemic amplifies food insecurity in Conroe, Montgomery

• Chipotle with drive-thru coming to Montgomery in December

• Over 200 homes for rent coming to southeast Conroe

For the first three to four years of operation, the center had about 400-540 cases annually, said Dr. Kathryn Pinneri, the center’s director, who came on board in 2016. But as the county’s population grew and new hospitals opened, the workload skyrocketed, she said. 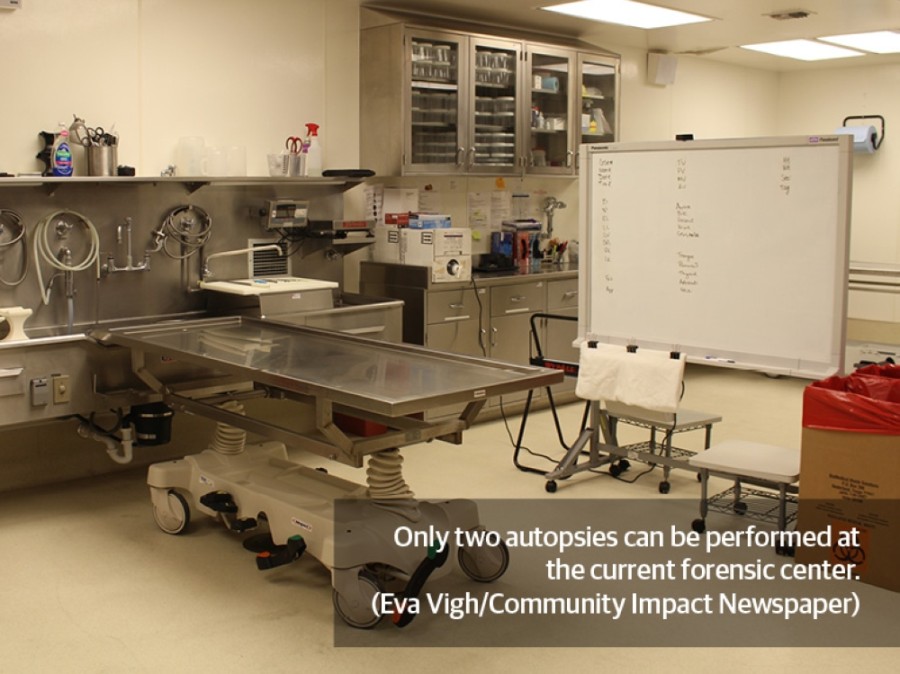 That same year, the forensic center was designated as an office of death investigation to help justices of the peace handle their workload, which increased over 40% from 2013 to 2017, Pinneri said. In 2019, commissioners granted her request for an additional staff member, which she said has helped streamline the workflow from the justices of the peace.

Still, the center is stretched to the limit, she said. There are problems with the ventilation and air conditioning. Only two autopsies can be performed at the same time. There is not enough office space, so staff meetings are held outdoors.

And the coolers can only store about 20 bodies, so overflow bodies are stored in refrigerated shipping containers. This happened during the early months of the pandemic as families delayed visiting funeral homes to make arrangements, Pinneri said. There is no space in the event of a major catastrophe.

“It just wasn’t built to handle the current caseload,” she said. “We’ve run out of space in our coolers on numerous occasions this year.”

Around 2016, county officials began to seriously discuss the need for a new center, Riley said. They formed a committee, which he co-chaired, and held meetings with various stakeholders. 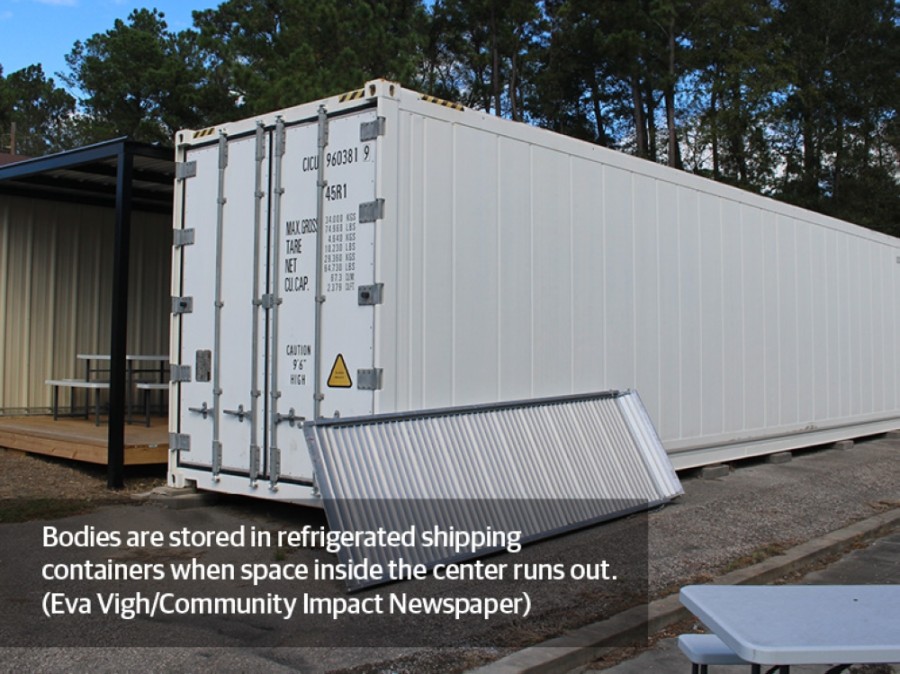 In September 2019, commissioners approved a $1.2 million contract with PGAL, an architecture firm. Riley said the county has budgeted $11.8 million from its Capital Improvements Projects for the first phase.

The first phase is the creation of the new forensic center, which is estimated to take two years to build. The center, which will have up to three times the space, can be expanded with a crime lab and forensics lab, the other two phases, which could be built out in the next 20 or 30 years. The center will sit on an 8-acre property by the Conroe-North Houston Regional Airport, and other counties could potentially contract to use the center, Riley said.

Entities such as the Montgomery County Sheriff’s Office, the Conroe Police Department and local fire departments rely on the current forensic center to conduct independent death investigations. For example, during a homicide, the sheriff’s department responds to the scene and provides the forensics department with photos and evidence. Forensic pathologists use this information together with the autopsy to determine the cause of death, Pinneri said.

“We make incisions in the skin to look at all the internal organs, [and] we document trauma [and] natural disease,” she said.

“Even though our work is with individuals who have died, we service the living.” -Dr. Kathryn Pinneri, Montgomery County Forensic Service Center Director

Montgomery County Fire Marshall Jimmy Williams said all fire fatalities require autopsies because oftentimes the cause of death is not obvious.

“We have found in some autopsies in the past this victim was found dead in the fire, but they were shot or stabbed,” he said.

Williams said there are about 6 to 10 fire-related deaths in Montgomery County each year, although he recalled a fire in Cut and Shoot about 20 years ago that claimed six victims.

Pinneri said although the new facility may seem costly, it is needed.

“I know there’s been some pushback as to whether Montgomery County needs this new forensic center. I can tell you 100% we do,” she said. “Even though our work is with individuals who have died, we service the living.”
Montgomery County
SHARE THIS STORY

One vaccination hub is now open, but appointments filled up within minutes. Here's what we know about the county's distribution plan.

The goals are to improve in the following areas: academic achievement, safety, finance and operations, human capital, and communications and customer service.

Harvest Market to open 'grocerant' in late January in Woodforest

The “grocerant” will feature a full dining experience and a grocery store with foods from around the world.