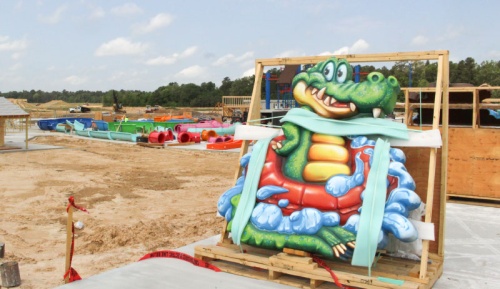 Construction continued in May on the Big Rivers Waterpark and Gator Bayou Adventure Park, which open June 29.

Construction on Montgomery County’s premiere theme park, Grand Texas, made strides in May as developers prepare for the opening of Big Rivers Waterpark and Gator Bayou Adventure Park. The parks were about 80 percent complete in early May, Grand Texas officials said, with the two new attractions scheduled to open June 29 for their inaugural seasons.

Grand Texas is a 632-acre, multibillion-dollar entertainment development located at Hwy. 242 and Hwy. 59 in New Caney—about a 30-minute drive from the city of Conroe. The first two sections of the park, the Grand Texas RV Park and SpeedSportz Racing Park, opened in 2016.

Montgomery County was chosen as the location due to the lack of family activities in the area despite an abundance of communities with families, Grand Texas CEO Monty Galland said.

“If your family comes from out of town and you live in The Woodlands, where do you go to have fun in Houston?” Galland said. “You go to Kemah [boardwalk], but that’s a long way to go when you’ve got a great population here. We can be that destination.”

Big Rivers Waterpark—a 40-acre park inspired by Texas rivers—will feature a wave pool, a lazy river, water slides and a barbecue restaurant when gates open in late June. The park’s four water rides, however, will not arrive until August or September, Galland said.

Daily and annual passes to the waterpark went on sale in early April and can be purchased online or at the Grand Texas RV Park for $29.99 and $69.95, respectively.

“You can’t just put out a cookie-cutter place anymore and expect people to come,” Brock said. “You have to cater to them, have exceptional customer service and be at a reasonable price.”

Construction will continue over the next few years on the other areas of Grand Texas, which include a sports complex, the Grand Texas Theme Park, an outlet mall, additional retail space, four hotels and more restaurants.

Montgomery County Judge Craig Doyal said the county will also benefit from Grand Texas’ property taxes, and the park is likely to attract other commercial developments to the area.

“Commercial development is vital, because it grows our tax base but requires less in services from the county than residential development,” he said.
SHARE THIS STORY