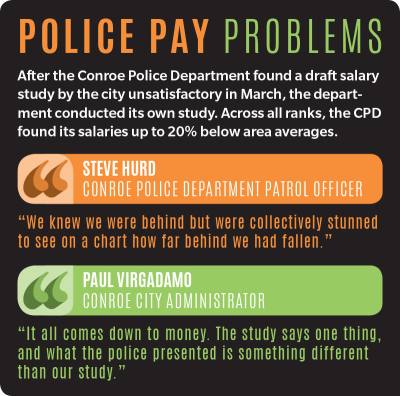 Conroe patrol officer Steve Hurd said he took the test to work for the Conroe Police Department in 1991 among the more than 400 hopeful applicants who showed up for only four positions.

“Most recently, we had a total of five applicants show up for our last test [Feb. 2], so clearly we do have a problem,” Hurd said March 28 at a Conroe City Council meeting. “We’re here to ask for a raise. The Conroe police officers need your help.”

The request comes following the city’s internal draft of a proposal for staff salaries ahead of this summer’s budget session. A similar 2018 study from the Texas Municipal Police Association showed Conroe’s police officer salaries throughout its ranks to be 10%-15% below comparable nearby departments, such as in Bryan, League City, Pasadena and Pearland.

Kevin Lawrence, executive director of the TMPA, said nearby market rates determine how much a department needs to pay to attract and retain qualified personnel.

“When Conroe starts talking about what their market is, what should they be paying their law enforcement personnel, that’s what you have to look at: Who are you competing with in your attempt to attract and retain good, qualified personnel? And then decide [salary rates],” Lawrence said.

Lawrence said recruiting is a crisis for law enforcement right now across the state.

Top CPD patrol officers—those with at least eight years of patrol rank experience, who make up 40% of the CPD—earn an average salary of $56,200 per year, according to Recruiting and Community Liaison Officer Eddie Davis, who said the department’s own study shows salaries 20%-25% behind comparable cities such as Pearland, Baytown and Friendswood.

The TMPA study shows Conroe officers start at 10.5% below the average of Beaumont, Bryan, League City, Pasadena and Pearland police departments—and shows Conroe’s department does not offer incentives like the others.

“We had gone almost a year and a half without a pay raise, and a lot of people were getting frustrated with it,” Davis said in a phone interview.

March 28, Davis said he was conducting a background check on an applicant, but during the process she withdrew and accepted a position with Harris County because of pay.

“We’re hurt so extremely bad in recruiting,” Davis said. “[With] the anticipated growth that’s being foreseen, we are going to have a very difficult time recruiting officers to our area if we’re not competitive with those other cities.”

“It is no longer a secret: Your police officers are significantly underpaid,” Hurd said at the City Council meeting. “We knew we were behind but were collectively stunned to see on a chart how far behind we had fallen. … When the [city’s draft] proposal was released [mid-March], members were upset.”

Montgomery County Sheriff’s Office salaries are low, as well. Sheriff Rand Henderson said according to a 2018 county law enforcement pay report, $52,173 is the average annual starting salary for entry-level deputy positions, such as bailiff or jail transportation patrol, which make up nearly 60% of Henderson’s patrol officers.

“That [salary] may be a little low. … This study indicated the deputy rank was 11% below the comparative ranks,” Henderson said. “I don’t think we struggle as much as other agencies, but we do feel our salaries are behind as well.”

“We recruit cadets and we have a full-time, paid cadet class, so that gives us an advantage over a lot of other agencies,” Henderson said. “What I’ve done is taken existing positions and turned them into cadets and trained them. We actually run a shortage in the streets because of it.”

The sheriff’s office’s police academy graduated 18 cadets in early April and started 20 new cadets at the beginning of May, he said. Henderson plans to bring an empirical analysis of patrol deputies before Montgomery County Commissioners Court during budget preparation season to ask for more positions and a bilingual interpreter stipend.

“I’ve been very upfront. We’re behind in our staffing number at the deputy rank, so I’m hoping to have enough to start another academy this fall, but it depends on the Commissioners Court and their ability to fund additions,” Henderson said.

Duke Coon, Conroe City Council member and mayor pro tem, said April 29 the city is actively working on completing the salary study. The city declined to provide the draft of the study.

“What’s important to recognize is when the study originally came out, portions of it were not complete,” Coon said. “I think the [officers] were unhappy with the draft version, but as anybody knows, when you’ve got a pay study like that, it’s really a work in progress.”

“The study covered all employees, not just police officers. It’s comprehensive—full-time, part-time, all departments,” Williams said. “They did the initial study, then updates to it because the original data is from last year, so you’ve got to redo that.”

The police department met with the city about the salaries April 16.

“There are some positions that need to be adjusted to get within the market based on the salary survey,” Conroe City Administrator Paul Virgadamo said in a phone interview. “It all comes down to money. The study says one thing, and what the police presented is something different than our study.”

Virgadamo said he does not believe hiring talent is an issue for CPD.

“Not in my opinion—our police force is fully staffed, plus we over-hire positions,” Virgadamo said.

The city is scheduled to finalize its fiscal year 2019-20 budget this summer throughout July and August.

“We plan as a council and the mayor to add a significant amount of money this year in our budget to increase salaries not only for our fire and police, but for our staff as well,” Coon said.
SHARE THIS STORY