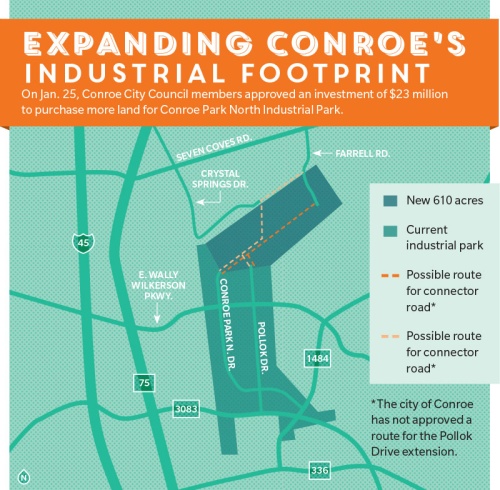 On Jan. 25, the city of Conroe made an investment toward the community’s future economic growth when council members unanimously approved a $23 million land purchase from sales tax revenue bonds to expand the Conroe Park North Industrial Park. The existing portion of the industrial park exists on 1,045 acres located off FM 3083.

“The importance of this industrial park is second to none because it brings good paying jobs, good amenities, good working relationships and a good quality of life for our citizens,” Powell said. The city invested in a 610-acre land expansion to keep up with the growth at the industrial park, which is currently at 80-percent capacity, said Danielle Scheiner, director of the Greater Conroe Economic Development Council.

With money allocated from future budgets, Powell said the city will install utility lines and construct roads on the 610-acre property.

Powell said the city also intends to connect Pollok Drive off FM 3083 to Farrell Road in the north Conroe area to alleviate traffic congestion and connect the existing park with the expansion.

Decades after its creation in the late 1960s and early 1970s, Conroe Park North is now home to 27 companies where more than 3,000 individuals are employed, Scheiner said.

“We don’t have to miss out on opportunities any longer because we’ll have the ability to bid on some of those projects and bring them to the community,” Scheiner said. “The money that’s invested in the acquisition of the land and any money we put into infrastructure, we’re turning around and recouping it when we sell the land to the companies.”