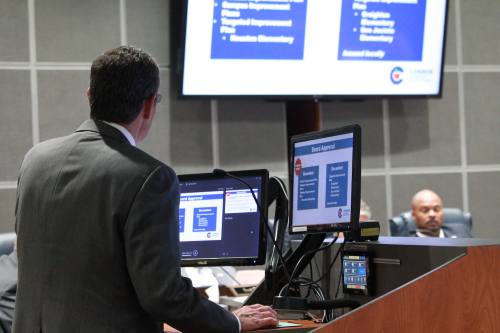 Conroe ISD is examining how to improve the academic success at several campuses after receiving its 2018-19 Texas Education Agency scores.

On Oct. 15, the Conroe ISD board of trustees reviewed the 2018-19 Texas Accountability and Texas English Language Proficiency Assessment System, or TELPAS, results. These scores rate a district’s performance based on student performance and progress, according to the TEA website.

“Certainly, there are areas that we celebrate and that we’re feeling good about,” Deputy Superintendent Chris Hines said. “And there’s always areas, too, when we look at the data and we study it and really understand how we can improve and get better.”

In all three sections, Taylor said the district performed higher than the state. Taylor said her department is now directing its focus on subgroups of students that did not meet expectations—groups in math, graduation rates and TELPAS.

Hedith Upshaw, CISD director of curriculum and instruction, said TELPAS divides students who are learning English as a second language into four groups: beginner, intermediate, advanced and advanced high. She said the state expects ESL students to move up by one level every year.

“It takes five to seven—sometimes up to eight—years for children to acquire this language,” Upshaw said. “So sometimes, it doesn’t happen overnight.”

Conroe ISD did not meet the target for this area, but Upshaw said that might have to do with testing errors, and she added that her department is already working on some strategies to improve the ratings for next year.

Although she acknowledged there is room for improvement at multiple schools, Taylor said there is much to celebrate in the report, with only two schools—Creighton Elementary School and San Jacinto Elementary School—receiving D ratings, and with several schools improving their scores.

“As you will recall, Houston Elementary was an F campus, and I am happy to report they are now a C campus,” Taylor said.

Hines said he hopes to bring a more specific and detailed improvement plan for the district and the campuses in November. In December, he will bring plans specific to both Creighton and San Jacinto.