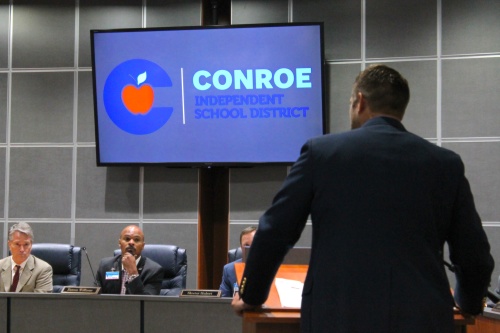 The Conroe ISD board of trustees heard a presentation on district safety Oct. 1.

At a workshop Oct. 1, the Conroe ISD board of trustees compared notes on how CISD is prepared to protect its students from dangerous situations, such as school shooters, and on how the laws have changed surrounding school safety.

Trustees heard a joint presentation at the workshop from Deputy Superintendent Chris Hines and Brian Zemlicka, deputy director for administrative services for the Education Service Center’s Region 6. Regions serve as a liaison between the districts and the Texas Education Agency. Zemlicka said Region 6 governs 57 school districts.

In the presentation, Zemlicka explained recent changes in legislation surrounding safety requirements for school districts, and Hines showed what CISD already has in place.

Zemlicka said at the start of the presentation that many of the changes were put into motion following the May 18, 2018 Santa Fe High School shooting. However, he praised CISD for its safety procedures, saying it is the most “progressive” district in the region.

“It’s just because of your size—you’re our largest district; you have so much support,” Zemlicka said. “And so you do so many things that some districts haven’t even thought about doing, so I’m giving you kudos.”

In planning for an emergency, Zemlicka said there are four aspects the district must be aware of: prevention, preparedness, response and recovery. Hines said all staff in the district must go through a training program and study the district’s emergency plan for various scenarios.

As part of Governor Greg Abbott’s 40 Point Plan for school safety, Zemlicka mentioned new construction requirements will be put in place to ensure safe school buildings. Hines said the district’s newest school, Suchma Elementary School, is already outfitted with new classroom locks, and the older schools will be retrofitted with them as well.

“All Montgomery County emergency response agencies have access to our campus information,” Hines said. “Basically, all of our maps to our facilities … so that emergency responders can pull that up in the field and access out current information.”

Hines also said the district is part of Montgomery County Special Threat Response Group, which develops plans and tactics for all emergency response agencies across the county.

Both Zemlicka and Hines placed a special emphasis on mental health. Zemlicka said the Legislature wants to further train school employees to be able to identify and deal with these issues. He also said House Bill 18 has added extensive training to teacher requirements and has expanded the roles of campus leaders to educate about mental health.

“But one thing [school shooters] all have in common is ... They tell someone. Or they hint to someone. Or they write it somewhere. They all do that. And it’s just about having our entire district aware [so] that when they see something, they say something, and they do something,” Zemlicka said.

Hines said all CISD police officers are trained to deal with mental health. He said the district also offers training programs for students and parents to deal with several issues, including anxiety, trauma, vaping and self-image.

Although the presentation made special note of school shooters, Zemlicka said the new safety procedures also cover any disaster the district may face, such as dam flooding from Lake Conroe or a student medical emergency.

Superintendent Curtis Null mentioned that a large portion of the Nov. 5 bond is directed at safety and campus renovations to bring students into buildings and out of portables. He said the Conroe High School Phase 2 renovation aims to bring the six-building campus under one roof to reduce the number of entries to the high school and keep students safe.