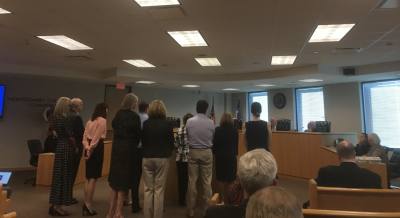 Officials with the Office of Court Administration addressed the Montgomery County Commissioners Court Sept. 24 to discuss issues with the budgeting system.

Sept. 27: Community Impact Newspaper was not able to source the original allegations made by a Montgomery County commissioner. This story will be updated if that information is obtained.

Montgomery County district court and county court at law judges said they are being unfairly blamed for budget shortfalls—an allegation that does not take into account growing expenses due to increasing caseloads.

Annual caseloads in county district courts have risen by 10,746 cases since 2008—a 41.3 percent increase, compared to the 32.4% population growth over the same time period, Community Impact Newspaper previously reported.

Judge Kathleen Hamilton of the 359th District Court and several other representatives from the OCA asked the commissioners court to include them in the budget-setting process.


"Recently a member of this court in a public statement has seemed surprised that the expenses have exceeded the amount you budgeted, and this has been blamed on certain judges and court administration staff... Hardworking people are getting hurt in shifting responsibility."

Hamilton said they felt called to action after a member from the commissioners court had made comments blaming the staff for its budget shortfalls.

"We have been unwillingly brought into this process by some public statements of a member of this board," Hamilton said. "We’re also here to address the expenditures of what is known as court operations."

Court operations include costs associated with indigent defense, the appointment of counsel in cases involving abused and neglected children and providing citizens with their constitutional right to a jury trial, Hamilton said.

These costs have been historically set by commissioners based on actual expenditures from the previous fiscal year rather than consulting with judiciary judges or their administrative staff or using trends in case filings and costs for cases, Hamilton said.

"Each and every year it resulted in expenses that exceeded the budgeted line item. This is because each and every year, the population of this county grew and grew," she said. "With the population growth, so grew our court dockets, the family, civil and criminal cases … and so grew the thousands of individuals entitled representation in court."

"Recently a member of this court in a public statement has seemed surprised that the expenses have exceeded the amount you budgeted, and this has been blamed on certain judges and court administration staff," she said. "Hardworking people are getting hurt in shifting responsibility."

"For the past two years, attempts have been made to essentially point the blame at the judges or our OCA director, who we’ve lost. He has resigned as a result of what’s happening," Gilbert said.

In August, Jensen had told the commissioners the OCA was $420,000 short of its allocated budget, but his request had gone largely unheeded, Gilbert said.

"We were instructed to come back midyear and essentially beg for money, and we don’t want to be in that position," Gilbert said.

County Budget Officer Amanda Carter said she has listened to the OCA's concerns and will work closely with them in the future, such as holding midyear budget updates.

Commissioners expressed concern over the budget issue and agreed to revisit the topic in March.

Precinct 3 Commissioner James Noack was absent during the discussion and vote.
SHARE THIS STORY