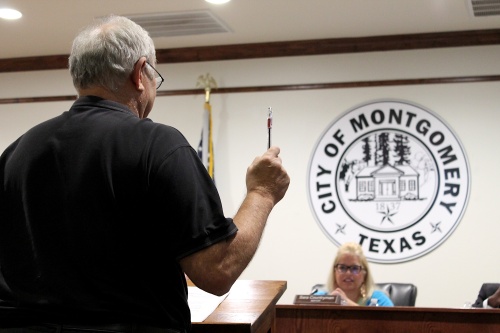 Work to improve the intersection of FM 1097 and Atkins Creek may soon begin now that the city of Montgomery has approved a bid on the Federal Emergency Management Agency project.

City Engineer Chris Roznovsky said the original project was opened in May and received no bids, but after re-evaluating the scope of the work, he recommended going with Solid Bridge Construction.

“We currently have a project with them in the north side of Houston,” Roznovsky said. “The work that they are currently doing and have done have no issues.”

Council also considered plans to put two or three speed humps on Bessie Price Owen Drive. Council Member John Champagne requested the bumps but said he was open to solutions to stop the 40-50 mph speeding in the 20 mph signage road.

“A dog gets loose, a kid gets loose, we’ve got a problem,” Champagne said. “As much as I hate speed humps, I hate the alternative.”

The council decided to allow the police department 90 days to monitor the area and potentially give out citations before deciding on adding speed humps. Police Chief Anthony Solomon said his officers will determine what time of day the speeding is occurring and will give citations with the officer’s discretion.

“We know why we’re there, and that’s to enforce that speed,” Solomon said.

The council gave City Administrator Richard Tramm approval to start working with City Attorney Larry Foerster to develop an ordinance prohibiting fishing at Memory Park, which is stocked with ornamental koi fish. Tramm said the potential fine would be around $250. Tramm said recently, an individual was ticketed for trespassing while fishing in the park, but his ticket was dismissed.

"They had a right to be at the property; it was their activity," Tramm said. "But there is no ordinance in place for fishing."

Michael Williams, the vice president of operations for Gulf Utility Service, gave a water report showing in the month of June, only 89% of the water used was accounted for and paid. Typically, the city sees 95% of water accounted for. Williams said his organization is looking for potential leaks or water thefts.

“We’re just trying to identify where this water has gone. It’s a bit of an anomaly,” Williams said.

Solomon said there have been 38 accidents since the beginning of the year, and his department will be implementing a new plan of increased police visibility to monitor the streets.

“We’ve worked a long time on this and are pretty proud of the end product,” Countryman said.