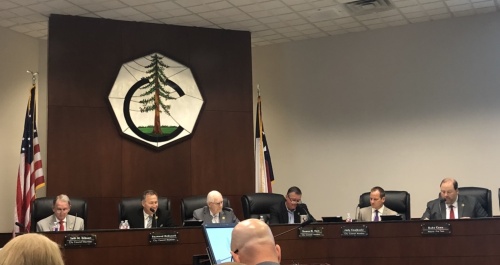 This article has been updated to reflect city council deferred the item June 27.

Residential streets could soon be built narrower within Conroe city limits, but council members were not unanimously supportive of the measure at the June 27 meeting.

Conroe City Council deferred an item that would have changed its code of ordinances to add density options to street widths for new developments.

"We had some good conversations yesterday and are going to do some tweaking before bringing it back to council," Powell said.

This comes after developer The Signorelli Company requested a street variance for subdivision Chapel Run, asking for 26-foot-wide streets instead of the previous Conroe standard of 29-foot widths. However, at the time, fire department officials said when two cars are parallel parked across the street from each other on a narrow street, it can be difficult for a fire truck to pass.

"We had this controversy on street widths and a precedent set in the past, and it's time to put these things to bed and start from this day forward with our own plans and how we do it," Powell said at the June 26 workshop. "The best way to do it is if we could cut out variances, cut out having to go to a developer or builder to take a plan to engineering, and then it goes to permitting, and then it goes to the planning commission and up to us and all this—if we can put together a menu of items ... when it comes to us, it should be clean cut according to what we're talking about. I was very upset with the situation before, and I think today we can start a new time for the city of Conroe."

At the workshop, Mayor Pro Tem Duke Coon said a vote on the item would take authority away from City Council to vote on variances, giving developers three options moving forward.

"I can't support this the way it is drafted," Coon said at the workshop.

Tommy Woolley, the director of the Conroe Engineering Department, presented three residential street width options for developers and builders to choose from in the future, without resorting to variance requests.

"This has been a long process for us; we've been looking at these typical section for five or six years now—it all started with the thoroughfare plan with H-GAC [Houston-Galveston Area Council] with Montgomery County, which finally finished up in 2016," Woolley said at the workshop. "With that thoroughfare plan, we need to update our streets."

Woolley said for a 29-foot-wide street, the minimum driveway width is 16 feet with two cars and a 20-foot setback instead of the former 15 feet, allowing two cars to park next to each other in the driveway and get off the street parking.

He said for a 27-foot-wide street, the driveway minimum is 20 feet wide with a two-car garage and a setback of 25 feet, along with rollover curbs so the cars that do parallel park can be closer to the edge of the street instead of a foot away from the sidewalk.

He said a 22- to 24-foot street has more criteria: no more than 32 residential driveways if it is a cul-de-sac, 24-foot-wide driveways, 25-foot-long setbacks, and a minimum of six parallel parking spots per lot or one parking spot per eight residents.

"I have too many issues with this to support this at this time," council member Seth Gibson said at the workshop. "22-foot-wide is an alley."
SHARE THIS STORY