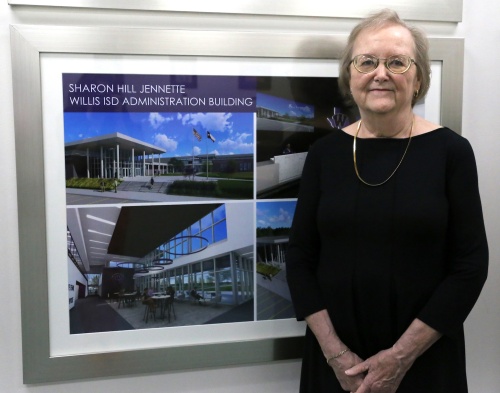 The new Willis ISD administrative building will be named after Sharon Hill Jennette, the former assistant to the superintendent.

The Willis ISD board of trustees members voted to name their new central administration building after Sharon Hill Jennette, who served as assistant to the superintendent for 49 years until May 31. Jennette passed away the next day on June 1.

The board of trustees unanimously approved naming the new building after Jennette on May 28, according to Director of Communications Jamie Fails.

“Every chance we’ve gotten, we told her we love her and how much she means to us and just that she’s such a woman of integrity and dedication. She’s had such a big part in getting this district to the place it is,” Fails said.

Superintendent Tim Harkrider said he is glad the district was able to honor Jennette before she passed. He said she told him how loved and appreciated she felt after the district approved the name.

“She’s a huge part of this district and quite honestly probably the most consistent part of our school district besides having school colors being purple and white,” Harkrider said. “There’s not anybody who’s been here longer.”

The building will be located in the empty lot across from the Willis Post Office and the baseball fields along Campbell Street and Rogers Road, according to Harkrider. Harkrider said administrators are currently housed in four separate buildings across the district, so the new building will help the administration be efficient.

“Everybody will be housed under one building,” Harkrider said. “Thinking longer term, as the area grows over the next 15 to 30, 40 years, there will be an area on the ground that you could build an expansion to it as well.”

Harkrider said construction will begin this month and will likely be finished by August 2020. Fails said the district is still considering options for repurposing the current buildings, but the Cargill building will remain as a historical site for the original Willis High School. The technology building will be demolished due to structural issues, he said.
SHARE THIS STORY