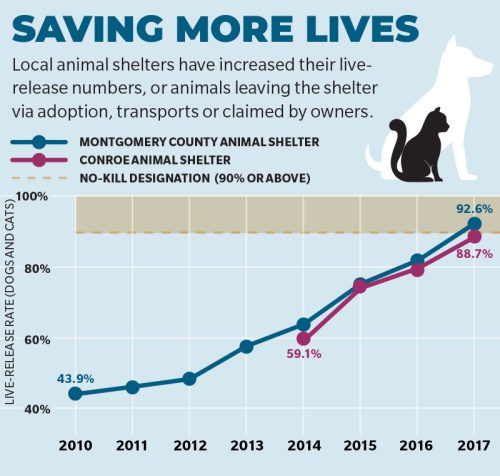 The Montgomery County and Conroe animal shelters are facing internal and external challenges in animal welfare following a spike in displaced animals after Hurricane Harvey. Beginning July 11, MCAS has temporarily waived adoption fees to relieve overcrowding, as the shelter had consistently housed 900 animals in the shelter for the first half of July— while MCAS only has 545 kennels at the facility.

MCAS Director Aaron Johnson said he believes Harvey has affected the shelter’s influx since August 2017, as the shelter has taken in 700 more animals this year compared to the same time last year. Johnson said the disaster shed light on existing animal welfare issues in the region: the industry's catch-and-kill mindset and overall pet service.

“If we’re helping people solve problems in their communities with their pet, helping them keep their pet ... it becomes something that helps everybody—not only people who have animals,” he said.
Capacity and staffing

Since 2016, MCAS has had four directors, with Johnson accepting the role in May 2017. In addition to director turnover, the shelter's challenges include space, staffing and funding shortages.
The shelter had a $3.57 million budget for fiscal year 2017-18, more than $600,000 less than MCAS requested from the county to fund additional personnel, wage increases and equipment upgrades, Johnson said.

“We have increased funding at the animal shelter in the last couple of years, but we’re woefully behind,” Doyal said.

Budget hearings for FY 2018-19 began in July, and the shelter requested $4.2 million, Johnson said.
If approved, it will fund wage increases for supervisors, kennel technicians and vet technicians, as well as allow the shelter to hire a pet retention coordinator and an adoption coordinator. Johnson said the two new positions will help owners keep their animals and kickstart adoption events.

“It makes it difficult when you’re trying to hire people and they can go down the road to the [Bureau of Animal Regulation and Care] and make $18 an hour as a vet tech, and here I can only give them $15 [an hour],” Johnson said.

Staffing shortages affect MCAS’s ability to provide care to the more than 14,000 animals it takes in per year, Johnson said. Due to high intake numbers, it currently has two dogs per kennel.

Although the shelter strives to have one dog per kennel, as it allows better disease control and overall quality of housing for dogs, Johnson said cohousing allows the shelter to accept more animals and save more lives.

While it may need to expand as the city’s population grows, Hopkins said the shelter is not lacking for space. She said Operation Pets Alive—a nonprofit that provides transport services and medical care to MCAS and Conroe Animal Shelter—helps foster and transport animals from the shelter.

“I’m not as quick [as prior owners] to say, ‘This dog has parvo [virus]—euthanize it ... we need space—euthanize it,’” she said. “I can call Operation Pets Alive and say, ‘These are what has to leave today.’”

OPA President Marcia Piotter said she believes cities, counties and shelters can do more to reach a no-kill status. A no-kill status is achieved when shelters have live-release rates, or the percentage of animals that leave the shelter alive, of 90 percent or higher.

“[If] your kids were going to school and only getting a 50 percent grade, no one would accept that,” Piotter said. “But for some reason when we talk about animal shelters [where] we’re killing animals that don’t need to be killed, that’s acceptable. And that shouldn’t be.”

Both animal shelters are working on programs and practices to increase live-release rates, which have improved.

“Picking up as many animals as you can is not the way to go—at one time it was the name of the game, but not anymore,” he said. “You really can’t do it because as the population grows, [shelters] can’t afford to keep building on.”

In May 2016, MCAS received approval from commissioners to launch a community cat program to decrease the number of stray, free-roaming or feral cats arriving at the shelter. It uses the trap-neuter-return method—the process of humanely trapping, neutering, vaccinating, removing the ear tip and returning cats to their original locations.

On the other hand, the city of Conroe's Animals at Large ordinance prohibits animals from being released in city limits through TNR programs; therefore, Conroe Animal Shelter depends on the help of OPA to release free-roaming cats outside of city limits after they are spayed and neutered, Hopkins said.

“Bringing the cat in and spay and neutering it and releasing it back, you’re not solving the problem,” said Jerry Abbott, deputy chief of the Support Services Bureau for Conroe's Police Department.

“This is a nationally accepted program to care for feral animals, and it has just been not embraced whatsoever,” she said. “There's not a single no-kill community that doesn't have a cat program. By putting up that roadblock, [Conroe] is prohibiting their city from becoming a no-kill city.”