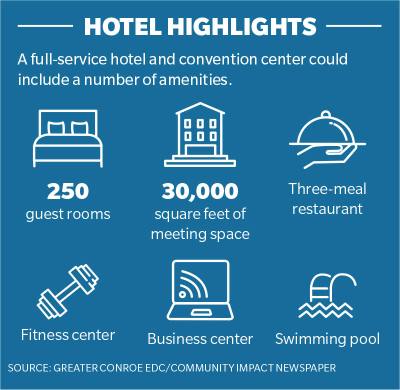 The Greater Conroe Economic Development Council commissioned a study completed in 2016 by CBRE Hotels, a real estate service firm, to assess the need for a full-service hotel and conference center. Potential sites for the hotel and convention center include Grand Central Park or other locations along the I-45 corridor, officials said.

Stakeholders continue to evaluate the need and viability of a hotel and convention center. In mid-2017, the GCEDC commissioned an update for the study to assess the continued viability of the project since new hotel facilities have opened in The Woodlands area since 2016.

Officials estimated a $65 million cost for the project, although no official designs or plans have been made. If the project moves forward, private and public stakeholders would share the cost. Conroe officials said funds for the public aspects of the project would likely come from hotel occupancy tax revenue, which can only be used to promote tourism, convention and hotel industry.